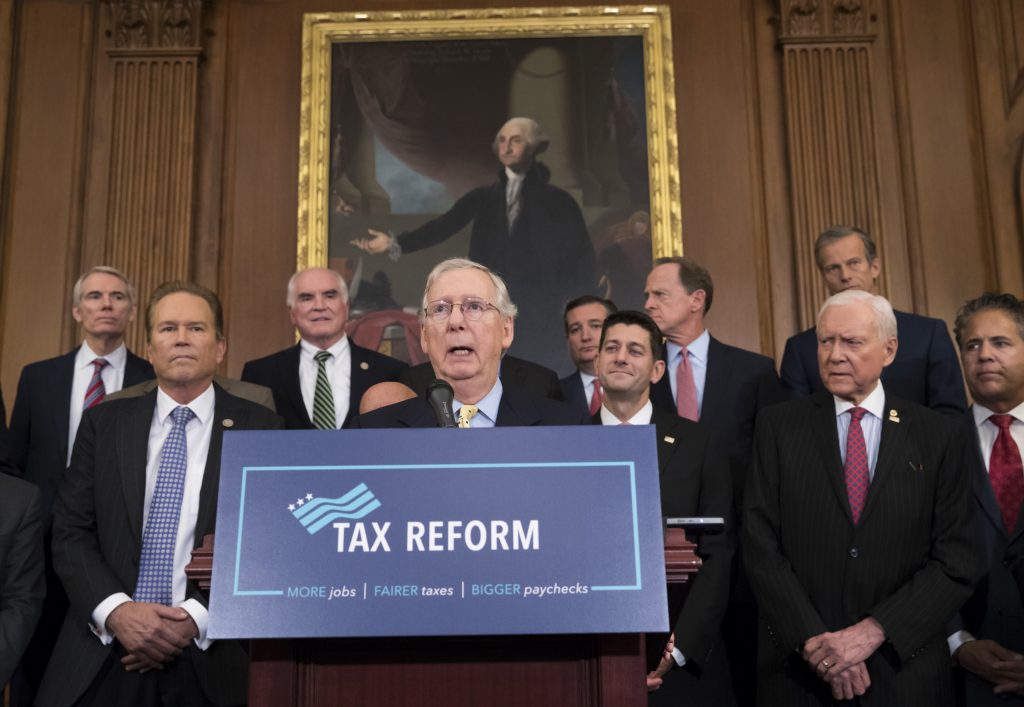 Congressional Republicans on Tuesday were speeding toward an agreement on a massive tax package that would ease the hit on Americans living in high-tax states and appease corporations that could have lost precious tax breaks.

Negotiators were working to expand a deduction for state and local taxes to allow individuals to deduct income taxes as well as property taxes, said two congressional aides. Negotiators were also working to eliminate the alternative minimum tax for corporations, the aides said.

The aides spoke on condition of anonymity because they were not authorized to publicly discuss private negotiations.

Negotiators were still working Tuesday on how to pay for the expanded tax breaks, though Republican lawmakers were optimistic that a deal was eminent. The total amount of tax breaks cannot exceed $1.5 trillion over the next decade, under budget rules adopted by both the House and Senate.

The Senate’s No. 2 Republican, Sen. John Cornyn of Texas, said a deal could come as soon as Tuesday. “I think it could and I hope it is,” he said.

Both the House and Senate bills would scale back the deduction for state and local taxes, limiting it to $10,000 in property taxes. The issue is important to lawmakers from high-tax states such as New York, New Jersey and California.

California Republicans are pushing to amend the bill to enable individuals to deduct state and local income taxes as well as property taxes. Rep. Pete Sessions (R-Texas) said there is an agreement on how to address the issue, though he wasn’t specific.

“It’s a huge issue in districts and there’s an agreement about how they are going to approach it and I just want to see that issue taken care of,” said Sessions, chairman of the House Rules Committee. “Once again, we’re in negotiation, and sometimes when you negotiate you have to decide what you’re willing to fight for and we need to fight for that.”

Rep. Tom Reed (R-N.Y.) warned that nothing is final until the whole package is worked out. But, he said he believes negotiators have found a way to include income taxes in the deduction for state and local taxes.

“I’m sure income tax is something, obviously addressing that concern is a big concern for many members, so I think there’s a solution there,” Reed said.

Rep. Lee Zeldin of New York, one of 13 House Republicans who voted against the tax bill in protest of the reduced deduction, said Tuesday he was awaiting details from leaders of a new agreement affecting income or property taxes. Doubling the limit to $20,000, he said, would help a number of homeowners in his high-tax Long Island district.

For corporations, the House-passed bill would eliminate the alternative minimum tax but the Senate bill would retain it. The tax was meant to ensure that corporations pay at least some tax.

Republican lawmakers from both the House and Senate said retaining the tax would limit the ability of corporations to take advantage of popular tax credits, including one for research and development.

House Majority Leader Kevin McCarthy (R-Calif.) has come out in favor of repealing the corporate AMT, giving the proposal momentum.

Both the House and Senate bills would cut the corporate income tax rate from 35 percent to 20 percent. Republican lawmakers said they were resisting efforts to set the tax rate at 22 percent as a way to pay for other tax breaks. Business and conservative groups have been lobbying hard for the 20 percent rate.

“We’re obviously trying to drive as low as possible in the House and the Senate, so we’ll see where it lands,” Reed said.

House and Senate negotiators were rushing Tuesday to finalize the tax package so both chambers could vote on it next week, handing a major legislative achievement to President Donald Trump before December 25.

The chief tax-writer in the House, Rep. Kevin Brady, said “We’re on track to finish” this week.

Trump will try on Wednesday to sell the American people on a GOP tax overhaul that is unpopular with many. His pitch: the plan will lift all economic boats, bringing a brighter future for taxpayers and their families, according to spokeswoman Lindsay Walters.

Both the House and Senate bills would cut taxes by about $1.5 trillion over the next decade while adding billions to the deficit. They would bring the biggest overhaul of the U.S. tax system in 30 years, pushing into every corner of the U.S. economy and society. They would double the standard deduction used by most Americans to $12,000 for individuals and $24,000 for couples.