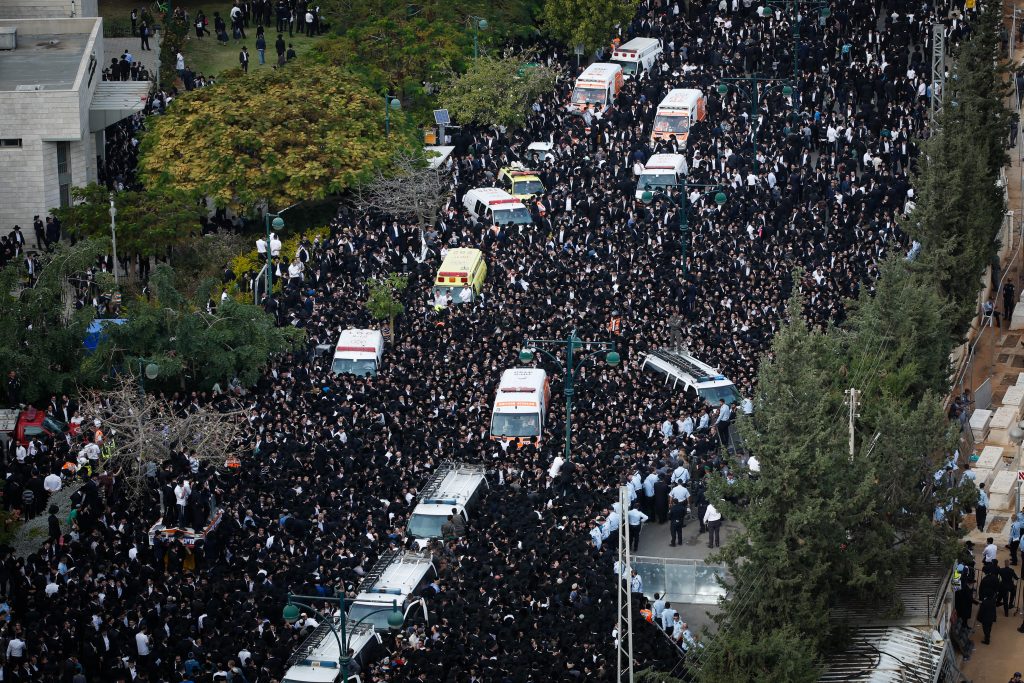 Hundreds of thousands of brokenhearted, freshly orphaned Jews streamed to Rechov Chazon Ish in Bnei Brak Tuesday for the levayah of the Gadol Hador, the senior Rosh Yeshivah, a light in the darkness of the galus, Maran Hagaon Harav Aharon Leib Shteinman, zt”l.

As the terrible news spread of Rav Shteinman’s passing shortly before 8:00 a.m. in Bnei Brak, Jews from across Israel began flooding all roads as they headed to Rechov Chazon Ish, toward the same home that had been the address for Jews from across the world seeking daas Torah, a brachah, a solution to a personal tzarah.

Hagaon Harav Gershon Edelstein, shlita, had called on all bachurim from yeshivos ketanos and yeshivos gedolos to take part in the levayah, and indeed, it seemed as if just about every Torah Jew attended.

From 10:00 a.m., police closed all private transportation in Bnei Brak. Several highways near Bnei Brak were closed, and converted to parking lots for the buses bringing people to the levayah.

The many buses that were arranged from Yerushalayim weren’t nearly enough for the massive crowds. Numerous people were turned away at the overcrowded bus stops. Some of them rented cars, only to be turned away by traffic police on the highways, which simply could not accommodate the multitudes headed to pay their last respects to the leader of his generation.

There were many calls for medical units as the crowds converged on the ambulance. A total of 98 people at the levayah were treated for minor injuries, according to Magen Dovid Adom.

Rav Gershon Edelstein spoke in Ivrit, briefly and with deep emotion, asking how can we possibly go on without Rav Shteinman. “He was like the sun for us,” said Rav Edelstein. “How will we manage without the sun’s light? Who will teach us Torah? Who will give us the hadrachah, the hashkafah, the hanhagah?”

Following Rav Shteinman’s tzavaah, his children did not walk with the mittah to the cemetery but remained at the bais avel, so his two sons said kaddish at the home.

The levayah then proceeded to the Ponevez Cemetery. Jews of all ages, Gedolim, talmidei chachamim, baalei batim, bnei yeshivah, Litvishe, Chassidim, Sephardim and National Religious, gave the kavod haacharon to this Torah giant. Many, including Rav Kanievsky, tore kriah.

The levayah arrived at the cemetery around 1:00 p.m., and the taharah was performed. He was buried next to his wife, Rebbetzin Tamar Shteinman, a”h. As the niftar was lowered and covered, loud sobbing was heard. Rav Chaim Kanievsky, a mechutan of Rav Shteinman, said kaddish at the cemetery.

Though the body of Rav Shteinman has, after 104 years, reached its final resting place, his soul will never rest, for as the Gemara says (Moed Kattan 29a), “Talmidei chachamim have no rest even in the World to Come, as the passuk says, ‘Yeilchu meichayil el choyil.’ ”