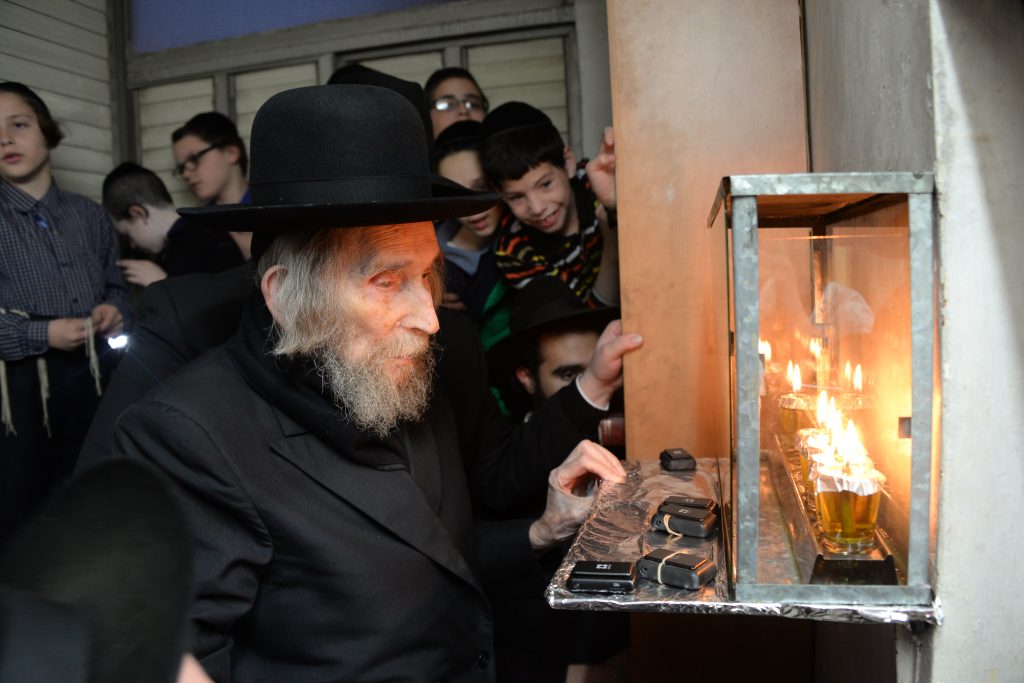 The chareidi world was plunged into mourning Tuesday with the petirah of the Rosh Yeshivah, Maran Hagaon Harav Aharon Leib Steinman, zt”l.

We present here a brief biography of the exalted life of the Rosh Yeshivah. A fuller and more comprehensive biography will be published, iyH, at a future date.

Harav Aharon Yehuda Leib Steinman was born in Cheshvan 5674/1913, the third child of Harav Noach Tzvi and Gittel Feiga Steiman. The family name was later changed to “Steinman.” He was named after two ancestors, Reb Aharon and Reb Yehudah Leib.

The family lived in Brisk, then part of the Russian Empire, where Rav Noach Tzvi served as a melamed in the local Talmud Torah, and was also in charge of the eiruv in the city.

At the time of Rav Aharon Leib’s birth, the family was living in Kamenitz, due to the winds of war that prevailed at the time. They stayed throughout the years of World War I at the home of his paternal grandtfather, Reb Moshe Eliyahu Gibornowski.

In Brisk, they lived next door to the Brisker Rav, Hagaon Harav Yitchak Ze’ev Soloveitchik, zt”l. His daughter, Rebbetzin Lifsha Feinstein, a”h, said that Reb Noach Tzvi was devoted to her father, and thus was zocheh to a son like this. Reb Noach Tzvi would bring his son to the Rav for a monthly faher.

From his youth he was recognized for his greatness. At the age of just 12, it was said in the Torah world that in Brisk there is a “new Chofetz Chaim in the making…”

He learned in Yeshivas Toras Chessed, headed by Hagaon Harav Moshe Sokolovsky, the author of Imrei Moshe, in Brisk.

He also learned for a while in Kletzk under Hagaon Harav Aharon Kotler, zt”l.

From bar mitzvah age, he learned on a daily basis with the son of the Brisker Rav, Harav Yoshe Ber – who was a few years his junior. Rav Steinman would reminisce about these years, adding that Reb Yoshe Ber had the notes of his grandfather, Hagaon Harav Chaim Soloveitchik, and “it was mamash a delight” to learn with these notes. He also founded a close relationship with Reb Moishe Soloveitchik, a grandson of Reb Chaim, a relationship that lasted a lifetime.

Upon reaching draft age in 1937, he was subject to the Polish draft, as Brisk had come under the control of the newly established Polish state in the aftermath of World War I. He and his close friend, Reb Moishe Soloveitchik, fled with other bachurim from Brisk to Switzerland. In Switzerland, the two were categorized as war refugees and were incarcerated in the Schonenberg labor camp near Basel, where all who weren’t Swiss citizens were put to work laying roads.

After a few months, they were both given positions as maggidei shiur in Yeshivas Etz Chaim, in Montreux, which relieved them of any army duty.

Harav Steinman was the only member of his family to survive the war. While still in Switzerland, in 5704/1944 he married Rebbetzin Tamar Kornfeld, a”h, the daughter of Rabbi Shammai Kornfeld of Antwerp.

A short while later, they moved to Eretz Yisrael, where Rav Steinman – on the advice of the Chazon Ish – was appointed Rosh Yeshivah in Yeshivas Chofetz Chaim in Kfar Saba. He lived near the yeshivah.

Eventually they relocated to Bnei Brak, where he was appointed Rosh Kollel of the Ponevez Kollel by the Ponevezer Rav, Harav Yosef Shlomo Kahaneman, zt”l.

Over the years, Rav Steinman was seen as a leader of Torah Jewry. He was a leading member of the Moetzes Gedolei HaTorah of Degel HaTorah.

Many would seek his counsel and brachos, at his humble home in Bnei Brak. Rav Steinman was noted for his hanhagos and leadership in the chareidi world.

His petirah is a loss to all of Klal Yisrael, one of the last connections and links to the previous generations.