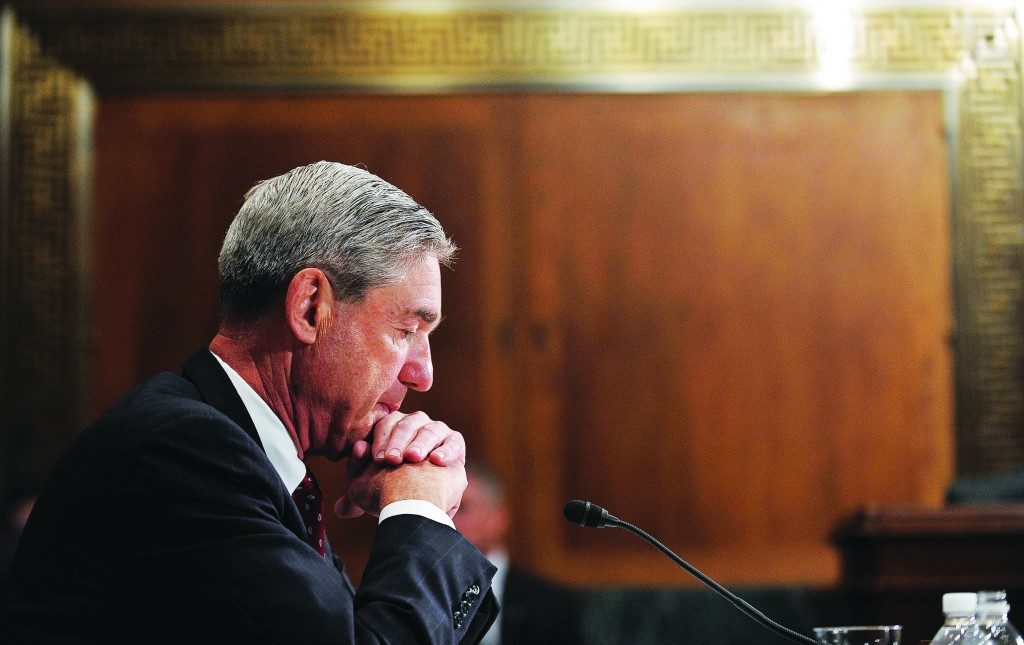 In one of the daily newsletters I subscribe to, prominent CNN personality Brian Stelter tells me (well, it says “Dear Yochonon” in the email) that he listened to “a LOT” of Fox News (all-caps his) to see what President Trump hears about the special counsel into Russia “collusion.”

So how is the rightwing network covering Robert Mueller’s still-searching-for-a-signal investigation? Here’s Stelter: The president hearing that it’s “illegitimate and corrupt.” That it’s led by a “band of merry Trump-haters” who are trying to reverse the results of the election. And the “overarching message” is unmistakable: “Mr. President, you’re the victim of a ‘deep state’ plot to take you down. Don’t let it happen.”

Along with Barack Obama’s birthplace, global warming and the wonder of higher taxes, there are few Democratic dogmas as powerful as the latest — Pres. Trump stole the presidency by somehow getting the Russians (“colluding”) to smear Hillary Clinton. And any interference with Mueller’s probe — which will doubtless find the incriminating evidence if it gets the time and money to dig long and deep enough — is obstruction of justice.

But here’s my carefully thought-out view. It’s time to wind down the probe. It started on a fraud, turned on a dime, and is currently being propped up with an increasingly aggressive media whose determination to see Pres. Trump’s downfall has led to an avalanche of fake news reports.

And now we are even finding out that practically every single member of the Mueller team are Democrats, having donated thousands of dollars to the Obama and Clinton campaigns, or have even worked on them.

Peter Strozk, however you pronounce it, was literally the guy who interviewed Clinton over her email scandal and convinced former FBI chief James Comey to downgrade the accusation from “grossly negligent” which would have made her liable for criminal charges to simple “extremely careless” with national security. Not a great campaign mantra, but good enough for Hillary at the time.

He was let go last month after texts he sent were seen by investigators. They’re not releasing the messages, but they say they were mocking of Pres. Trump.

Andrew Weissmann, a mann on a misssssion, is the second-in-command at the probe. He’s the brains behind the shock-and-awe search warrant of ex-Trump campaign chief Paul Manafort’s house at 5 a.m. He also was an attendee of Hillary Clinton’s glass-crashing election night party. Another title to his name is author of an email praising the Obama holdover acting attorney general after she refused to defend Pres. Trump’s travel ban (she was fired within hours).

Another beauty on the team is Aaron Zebley, the lawyer who was given the hatchet job by Clinton to destroy her old BlackBerries and get rid of the emails she didn’t want uncovered (he used a hammer). He also represented the IT guy who personally set up Clinton’s unsecure server in her Chappaqua home.

There’s more. But this op-ed is a one-page proposition.

Talk about draining the swamp.

So what’s holding the Mueller swamp together? What’s the name of the crazy glue?

The media has had four things for which to apologize to the president — just this past week.

The problem is, the Washington Post obtained the actual emails which showed that they were released after WikiLeaks published them. As in, they were available to you and me by the time this do-gooder sent them to Trump Jr. Minor difference, eh? That’s how CNN initially treated it. They issued a “clarification.”

So what are we to make of the probe? Of the three people since arrested, two of them were for crimes committed prior to their even joining the Trump campaign and the third, Flynn, was for his inexplicable lie about a legitimate meeting he had with the Russian ambassador. The probe’s bill is already approaching $7 million, it shows no sign or desire to wind itself down, and it is relying on a bevy of false media reports to keep it afloat (why do they never make mistakes in favor of Pres. Trump?).

Shut down the Mueller probe. We’ll all save money and Pres. Trump can begin governing.