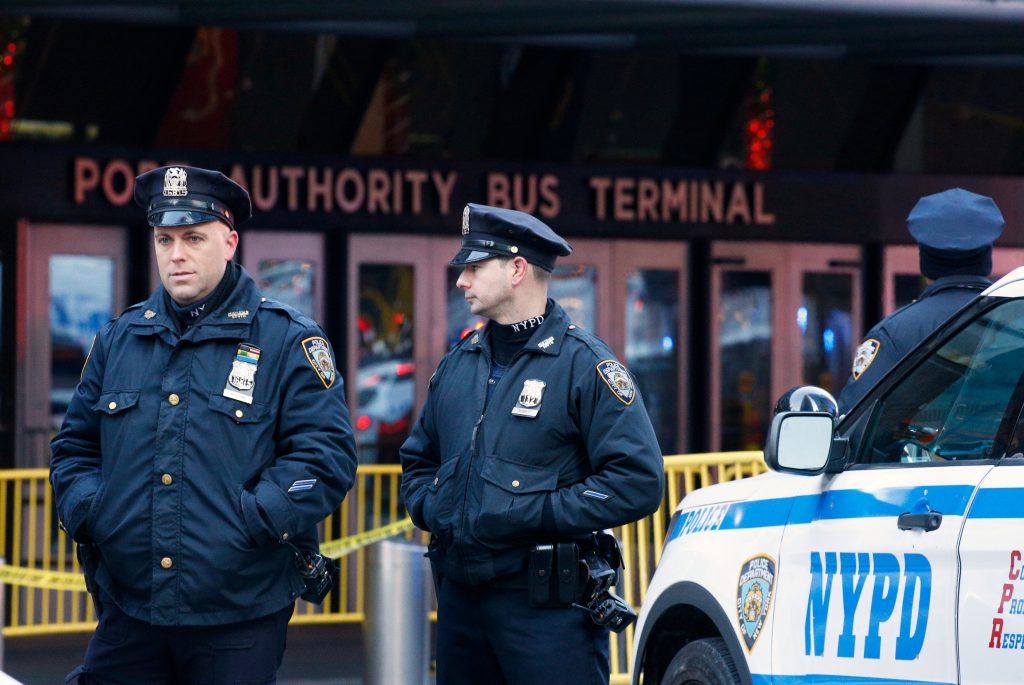 New York City reopened its subways shortly after 10 a.m, amid heightened city-wide security after a man with a pipe bomb strapped to him caused an explosion in an underground passageway in the Times Square area during the morning rush hour.

The man and three others were being treated for non-life-threatening injuries in what the mayor and police labeled an attempted terror attack.

Metropolitan Transportation Authority Chairman Joseph Lhota advised that trains on the Seventh and Eighth avenue lines were still bypassing the Times Square corridor as the investigation proceeded Monday morning. But he says overall service is back to normal.

The explosion happened in an underground passageway under 42nd Street between 7th and 8th Avenues.

First reports of the incident began soon after 7 a.m., at the start of the city’s rush hour.

“Thank G-d the perpetrator did not achieve his ultimate goals,” de Blasio said.

New York Governor Andrew Cuomo was also on the scene.

The suspect was identified as 27-year-old Akayed Ullah.

Law enforcement officials said he was inspired by the Islamic State terror group but had apparently not had any direct contact with the group. The officials said he lives in Brooklyn and may be of Bangladeshi descent. The officials spoke to The Associated Press on condition of anonymity because they were not authorized to speak publicly about the blast.

Authorities said the bomb was a low-tech explosive device attached to the man with Velcro and plastic ties. They were investigating how it was made.

The explosion triggered a massive emergency response by police and firefighters both above and below ground, tangling subway and bus service at the nearby Port Authority bus terminal.

Fire officials said the suspect had burns to his hands and abdomen. The others who were injured suffered ringing in ears and headaches.

Everything around the Port Authority area was shut down — a surreal scene of still at what would ordinarily be a bustling rush hour.

New Jersey Transit buses headed to the Port Authority were diverted to other locations. NJ Transit said buses were taking passengers to Secaucus and Hoboken, where they could take trains into the city.

News of the incident jarred financial markets as trading was getting underway for the week. Standard & Poor’s 500 index emini futures pared gains, the dollar weakened against the yen and U.S. Treasury securities prices gained on a modest flight-to-safety bid.

The incident occurred less than two months after an Uzbek immigrant killed eight people by speeding a rental truck down a New York City bike path, in an attack for which Islamic State claimed responsibility.

In September 2016, a man injured more than two dozen people when he set off a homemade bomb in New York’s Chelsea district.