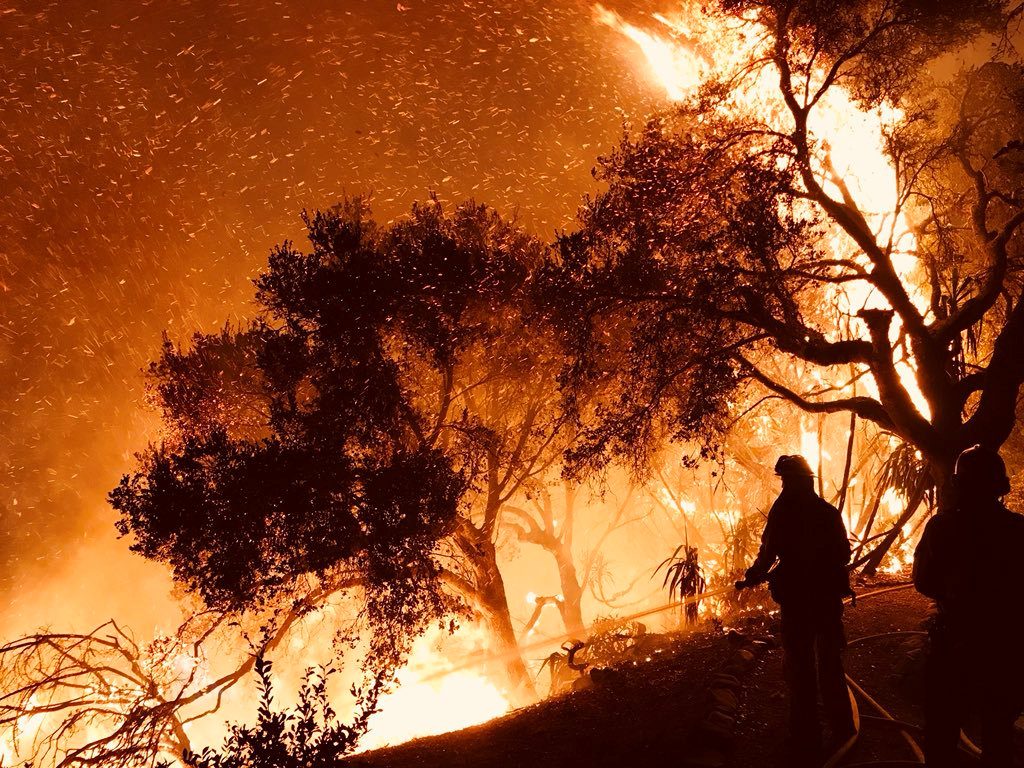 A powerful flare-up on the western edge of the largest and most destructive wildfire sent residents fleeing Sunday, as wind-fanned flames ripped down hillsides toward coastal towns northwest of Los Angeles. New evacuations were ordered as the fire sent up an enormous plume near Montecito and Carpinteria, seaside areas in Santa Barbara County.

“The winds are kind of squirrely right now,” said county fire spokesman Mike Eliason. “Some places the smoke is going straight up in the air, and others it’s blowing sideways. Depends on what canyon we’re in.”

Southern California’s gusty Santa Ana winds have long contributed to some of the region’s most disastrous wildfires. They blow from inland toward the Pacific Ocean, speeding up as they squeeze through mountain passes and canyons.

Gusts of up to 40 mph (64.3 kmh) are expected through Monday, according to the National Weather Service.

Containment increased Sunday on other major blazes in Los Angeles, Riverside and San Diego counties. Resources from those fires were diverted to the Santa Barbara foothills to combat the 270-square-mile fire that started Dec. 4 in neighboring Ventura County.

As of late Sunday, the Thomas Fire had destroyed 790 structures and damaged 191.

Fires are not typical in Southern California this time of year but can break out when dry vegetation and too little rain combine with the Santa Ana winds. Though the state emerged this spring from a years-long drought, hardly any measurable rain has fallen in the region over the past six months.

“This is the new normal,” Democratic Gov. Jerry Brown warned Saturday after surveying damage from the deadly Ventura fire. The governor and experts said climate change is making wildfires a year-round threat.

High fire risk is expected to last into January.

The air thick with acrid smoke, even residents of areas not under evacuation orders took the opportunity to leave, fearing another shutdown of U.S. 101, a key coastal highway that was closed intermittently last week. Officials handed out masks to residents who stayed behind in Montecito, the wealthy hillside enclave that’s home to celebrities such as Oprah Winfrey, Jeff Bridges and Rob Lowe.

“Our house is under threat of being burned,” Ellen DeGeneres tweeted at midday Sunday. “We just had to evacuate our pets. I’m praying for everyone in our community and thankful to all the incredible firefighters.”

In San Diego, which is 130 miles to the south, the Lilac Fire was 75 percent contained. The flames erupted suddenly Thursday in the Fallbrook area, known for its avocado groves and horse stables in the rolling hills.

The fire swept through the San Luis Rey Downs training center, where it destroyed more than 100 homes — most of them in a retirement community. Three people were burned trying to escape the fire that continued to smolder Sunday.

Despite the size and number of wildfires burning in the region, there has only been one confirmed death: A 70-year-old woman, who crashed her car on an evacuation route, is attributed to the fire in Santa Paula, a small city where the Thomas Fire began.

Most of last week’s fires were in places that burned in the past, including one in the ritzy Los Angeles neighborhood of Bel-Air that burned six homes and another in the city’s rugged foothills above the community of Sylmar and in Santa Paula.