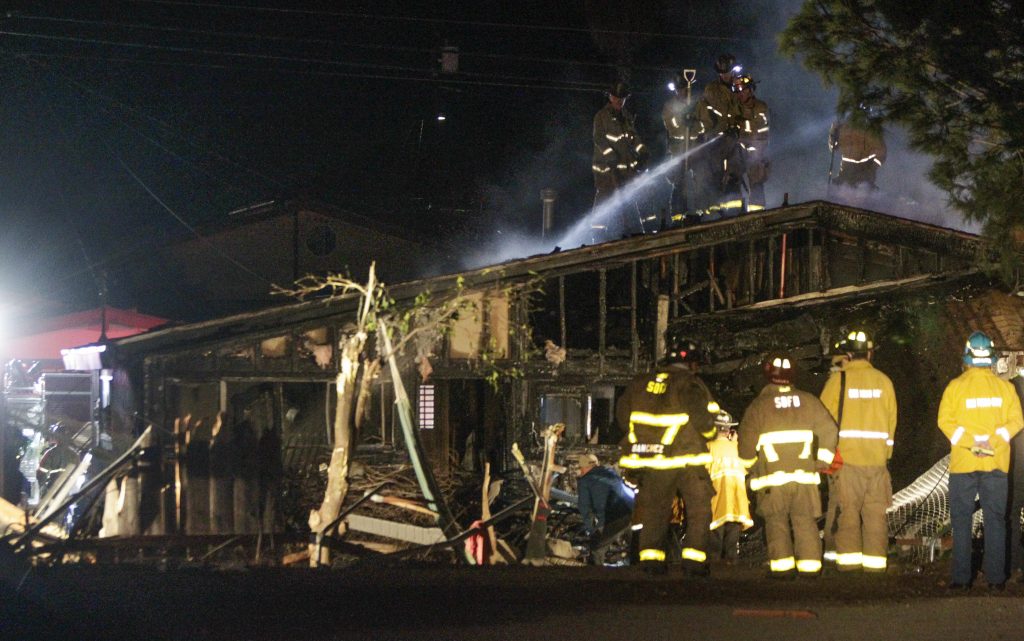 Two people were killed after a small plane crashed Saturday into a house in San Diego, authorities said.

The crash occurred shortly before 5 p.m. in the city’s Clairemont neighborhood, a few miles north of downtown, according to the San Diego Fire-Rescue Department. Two of the four people aboard the aircraft, the pilot and a passenger, were taken to a hospital with burn injuries, the San Diego Union-Tribune reported.

Nobody was in the house, but the occupants’ dog was killed, according to media reports.

The Washington Post was unable to reach the fire department Sunday morning, but Fire Chief Brian Fennessy told reporters that the single-engine plane took off from Montgomery-Gibbs Executive Airport, just east of Clairemont, about 4:30 p.m. The pilot reported an engine failure shortly after.

Fennessy told reporters that the pilot tried to land the plane on a schoolyard and an adjacent park behind the house. It landed upright and skidded at least 100 yards before hitting a fence and crashing into the back of the home, the Union-Tribune reported.

Authorities said the plane and the house immediately caught fire.

Authorities have not released the names of the pilot and the passengers, including the two who were killed. No other injuries were reported.

Neighbors reported hearing a loud explosion and immediately seeing flames. Some tried to get inside the locked home by breaking windows and began hosing down the flames before firefighters arrived, the Union-Tribune reported.

“It could easily have been our house,” neighbor Roula Bejjani told the paper.

Not much is known about the aircraft, a six-seat Beech BE36 Bonanza, according to the Associated Press. It also is not known why the engine failed. An investigation is continuing.

The National Transportation Safety Board investigates civil aviation accidents, as well as incidents on railroads, highways and bodies of water. The federal agency maintains a database of accident reports that it investigates. Nothing about the San Diego crash has been posted on its website as of Sunday.

The agency logged a little more than 39,000 transportation fatalities in 2016, about 95 percent of which occurred on highways. Only about 400 involved airplanes.