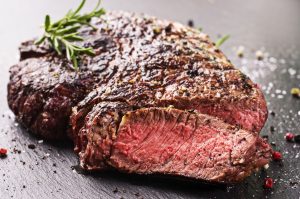 If you’ve dined at a steakhouse recently or grilled rib-eye for dinner, you may have noticed a curious trend: Steaks are getting thinner.

As U.S. beef cattle have ballooned in size, experts say, restaurants, grocery stores and meat processors have had to get creative in how they slice and dice them up. Increasingly, that means thinner steaks, as well as more scrap meat and “alternative” cuts designed to make the most of a bigger animal.

The cattle industry argues that it provides cheaper and more plentiful beef from fewer cattle. But there’s emerging evidence that Americans dislike the changes to their steaks. And that could hurt the beef sector in the long-run.

“If you buy a steak, you have a picture in your mind of what it should look like,” said Josh Maples, an agricultural economist at Mississippi State who has studied the new cuts. “If you make that thinner, or you cut it in half, for many people, that ruins the eating experience.”

It’s no secret that beef cattle are getting bigger. For decades, federal policymakers, academic researchers and industry scientists have striven to beef them up. What may be less obvious to many consumers is how those larger cattle lead to thinner steak cuts.

According to Department of Agriculture data, the weight of the average beef cow hovered around 1,000 pounds until the mid-’70s, when advances in genetics, nutrition and growth-promoting hormones began to produce larger animals. Since 1975, the weight of the average cow at slaughter has increased by roughly nine pounds each year, from 996 pounds in 1975 to a whopping 1,363 pounds in 2016. (“Cow” technically refers to adult females, only, but is used colloquially for cattle in general.)

As a result, experts say, U.S. ranchers now produce more beef at a lower cost than they did 40 years ago, even though herds have shrunk by 13 million.

But larger cattle also means larger muscles. For restaurants and grocery stores, that has proved a challenge.

“It’s a lot more work for our meat-cutters, I’ll tell you that,” said Travis Doster, the spokesman for Texas Roadhouse, a steakhouse chain with more than 400 locations.

The issue, Doster and others say, lies in the growing diameter of cows’ muscles: things like the longissimus, from which rib-eyes, top loins, sirloins and chuck eye are cut.

In a forthcoming study in the journal Food Policy, Maples and two co-authors found that as cattle grew, the surface area of the average rib-eye grew roughly two square inches – or two postage stamps – between 1991 and 2016. Those larger muscles result in massive, expensive portions if they’re cut to a traditional one- or 1½-inch thickness.

As a result, said Davey Griffin, a professor of animal science at Texas A&M, restaurants and grocery stores have changed how they cut and market steaks. The most common adjustment, especially among mass-market chains, is to simply slice traditional cuts thinner.

But over the past several years, there’s also been a movement toward “alternate” cuts and cutting methods. At Texas Roadhouse, for instance, in-house butchers don’t just slice a tenderloin into coins to make filets; they may also cut around the edges of those coins, and throw the scraps in kebabs or chili, Doster said.

Beef industry organizations, such as the National Cattlemen’s Beef Association, have also promoted novel cuts that break the old mainstays down into smaller portions. Instead of a traditional rib-eye, which slices across two cow muscles, butchers are separating the muscles and selling them as rib-eye cap steaks and rib-eye filets, Griffin said.

Griffin, who runs a popular quarterly workshop about the basics of butchery, has found that chefs are generally receptive to the new cuts.

“But you still have a lot of consumers who say, ‘that’s not a rib-eye, that’s not a sirloin,'” Griffin said. “So, it doesn’t work for everyone.”

For the food and cattle industries, that remains the big, unanswered question: whether consumers will adapt to the new and different steaks that larger cattle entail. Maples’s recent study has bad news on that front: In a survey of more than 1,000 U.S. beefeaters, he found near-unanimous dislike for “the thinnest cuts of steak.” The jury is still out on the new cuts like rib-eye cap steaks and filets.

Griffin, the Texas A&M professor, predicts consumers will simply have to adjust. Cattle have been trending in this direction for years, he said, and all signs suggest that traditional steaks will continue to get larger.

But Matt Niswander, a Black Angus rancher in Tennessee, questions whether consumers are the ones who will ultimately need to adapt.

“My customers want a one-inch or 1½-inch rib-eye. That’s all they know,” he said. “So, you as the rancher have to adjust to that.”