Israel Bitan to Be Questioned for Third Time Sunday
Israel 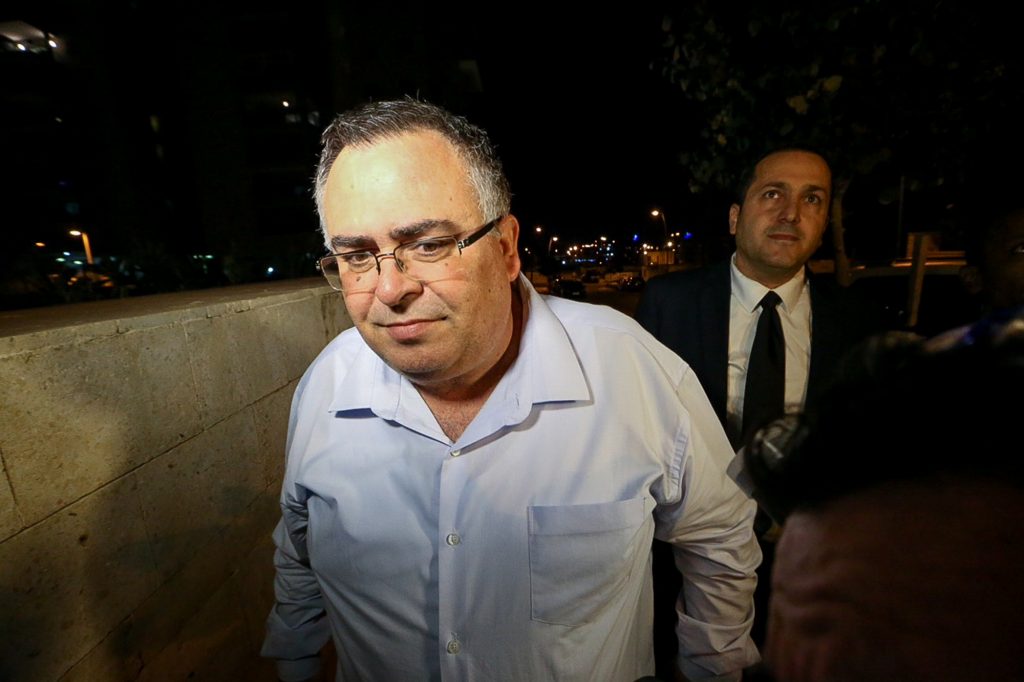 MK David Bitan (Likud), chairman of the coalition, appeared at police unit Lahav 443 headquarters Sunday morning for the third interrogation into his involvement in the help he allegedly gave to an Israeli crime syndicate to advance its business interests in Rishon LeTzion. Bitan is being investigated on suspicion of having received assistance from members of a crime family in order to cover personal debts he owed to mobsters.

Police claim to have an airtight case, based on secret recordings they made in cooperation with a suspect that turned state’s evidence. According to police, they have Bitan on tape discussing bribes he received from the suspect to help the businessman receive permits to build a home. Bitan is also accused of helping the crime family obtain a valuable contract for infrastructure preparation work on a large Rishon LeTzion project.

On his way into police headquarters Sunday, Bitan told reporters that he could not answer questions about an ongoing investigation, “as is customary. But I also expect that contents of the investigation will not be leaked to the press. We have filed our papers with the court and we will say what we have to say there. I have gotten a great deal of support from my friends in the Likud. I will speak publicly when I have something to say.”

For the second week in a row Motzoei Shabbos, thousands of people protested in central Tel Aviv, demanding that the government step down in the wake of the corruption investigations against Bitan, Prime Minister Binyamin Netanyahu, and other ministers. Protesters carried signs condemning alleged corruption by the prime minister, calling for police to heighten their investigations against him, Bitan, Interior Minister Rabbi Aryeh Deri and Defense Minister Avigdor Liberman, all of whom have been accused of corruption in various investigations. Police closed several main arteries in central Tel Aviv, opening them up only around midnight, after the protest broke up.

Protests were also held in Yerushalayim outside the prime minister’s residence, as well as in Haifa. Eldad Yaniv, one of the organizers of the demonstration, told Walla News that “it is time to take down the ‘Balfour Mafia,’” referring to the location in Tel Aviv of Likud headquarters. “The investigations into Netanyahu’s behavior is bringing hope back to people all around the country. Israelis are once again beginning to believe that they can fight to restore their beautiful land from the clutches of those who are endangering them.”

In a statement, the Likud said that “on the evening when Prime Minister Netanyahu is set to leave Israel and represent the country against the attacks by European countries of President Trump’s declaration that the U.S. recognizes Yerushalayim as Israel’s capital, and at at time that Arabs are burning the flags of Israel and the United States, a leftist demonstration is taking place in Tel Aviv. Instead of uniting the people behind the unity of Yerusahalyim, the left cannot help itself, preferring to engage in division.”

Netanyahu left Motzoei Shabbos for a visit to France and Belgium, and will meet, among others, French President Emanuel Macron. Commenting on European opposition to Trump’s decision, Netanyahu said before departing Israel that he “had a great deal of respect for Europe, but I am not prepared to accept moral hypocrisy. I hear the condemnation of the Trump decision, but I do not hear the condemnation of rocket fire against us, or of the anti-Israel incitement by Palestinians.”