World PM Announces: Iraq’s War Against IS Has Ended
World 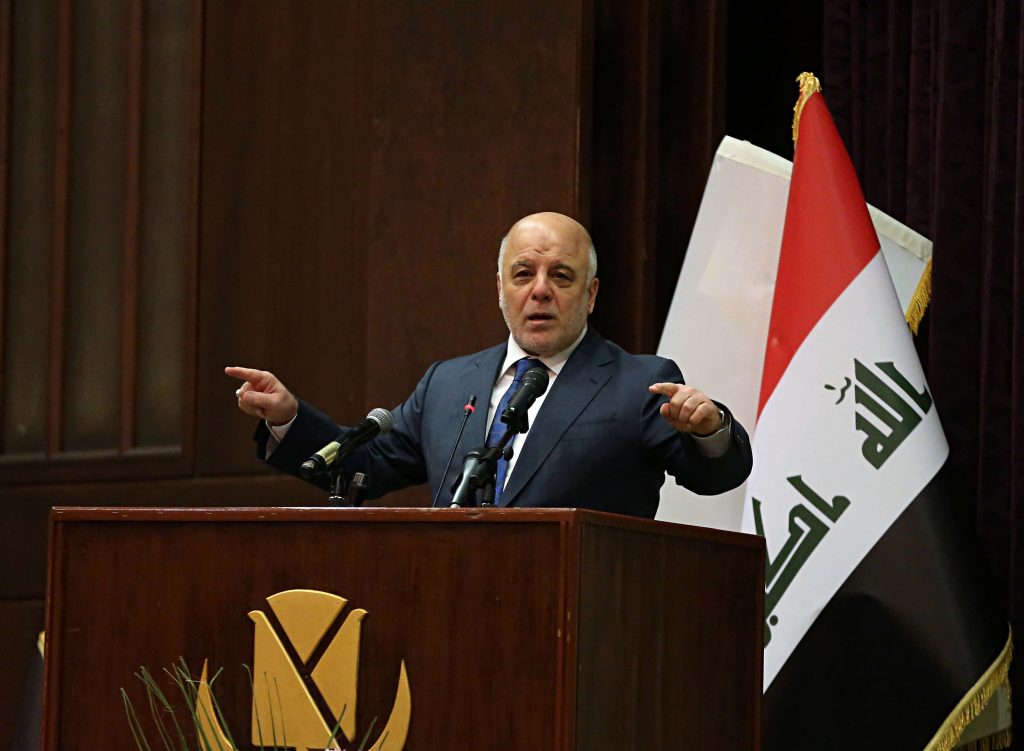 After more than three years of combat operations, Iraq announced Saturday that the fight against the Islamic State terror group is over after the country’s security forces drove the terrorists from all of the territory they once held. Iraqi and American officials warned, however, that key challenges remain despite the military victory.

“Honorable Iraqis, your land has been completely liberated,” he said. “The liberation dream has become a reality. We achieved victory in difficult circumstances and with G-d’s help, the steadfastness of our people and the bravery of our heroic forces we prevailed.”

“The flag of Iraq is flying high today over all Iraqi territory and at the farthest point on the border,” he added, standing before the most senior members of Iraq’s security forces.

Following al-Abadi’s remarks, his office declared a public holiday Sunday in celebration of the victory, according to an official statement from the prime minister’s office.

Iraqi forces mopped up the last pockets of IS terrorists from Iraq’s western deserts Saturday, securing the country’s border with Syria, a step that marked the end of combat operations against the terrorists.

The U.S. offers “sincere congratulations to the Iraqi people and to the brave Iraqi Security Forces, many of whom lost their lives heroically fighting ISIS,” State Department spokeswoman Heather Nauert said in a written statement, using an alternative acronym for IS.

“Our coalition will continue to stand with Iraq to support its security forces, economy and stabilization to help ensure that ISIS can never against threaten Iraq’s people or use its territory as a haven,” said Brett McGurk, U.S. special presidential envoy to the anti-IS coalition, in a statement posted to his official Twitter account.

“We mark today’s historic victory mindful of the work that remains,” he added.

Iraq’s government remains faced with significant security threats, an economic crisis and the enormous task of rebuilding swaths of territory decimated by the IS fight.

IS terrorists overran nearly a third of Iraqi territory, including Mosul, the country’s second largest city, and Tikrit, the capital of Iraq’s central Salahuddin province, in the summer of 2014. The following year, IS fighters also overran Anbar’s provincial capital of Ramadi.

Over the past 3-½ years, Iraqi ground forces closely backed by the U.S.-led coalition and mostly Shiite paramilitary forces backed by Iran have slowly retaken all of that territory.

The pace of the anti-IS operation accelerated last year as coalition-backed Iraqi ground forces prepared for the assault on Mosul that was formally launched in October 2016.

After more than nine months of mostly grueling urban combat, al-Abadi declared victory over IS in Mosul in July.

However, IS terrorists remain capable of carrying out insurgent attacks in Iraq, and the group has recovered from past setbacks.

IS terrorist networks continue to pose a threat to Baghdad and other Iraqi cities, a senior Iraqi security official said, speaking on condition of anonymity in line with regulations. The official said intelligence gathering would become increasingly important in the post-military phase of the fight against IS.

“The triumph of military operations alone is not enough without stability,” government spokesman Saad al-Hadithi said, explaining that rebuilding in the wake of military victories against IS remained a “big challenge” for the Iraqi government.

Additionally, some 3 million Iraqis remain displaced by the fight against IS, according to the United Nations.

Al-Abadi also remains faced with a political and military standoff with the country’s Kurdish region over a referendum held on independence.

Federal government troops remain deployed throughout a string of disputed territories claimed by both Baghdad and Iraq’s Kurds — who were also backed by U.S.-led coalition forces in the fight against IS. While Baghdad and Irbil have both stated a willingness to talk, negotiations to end the dispute have not yet begun.

As he closed his national address, al-Abadi acknowledged the challenges that remain for Iraq.

“I urge everyone to refrain from returning to the inflammatory and sectarian discourse that empowered gangs to occupy our cities and villages,” he said.

“Our people have paid a dear price,” he added. “We must turn this page forever.”