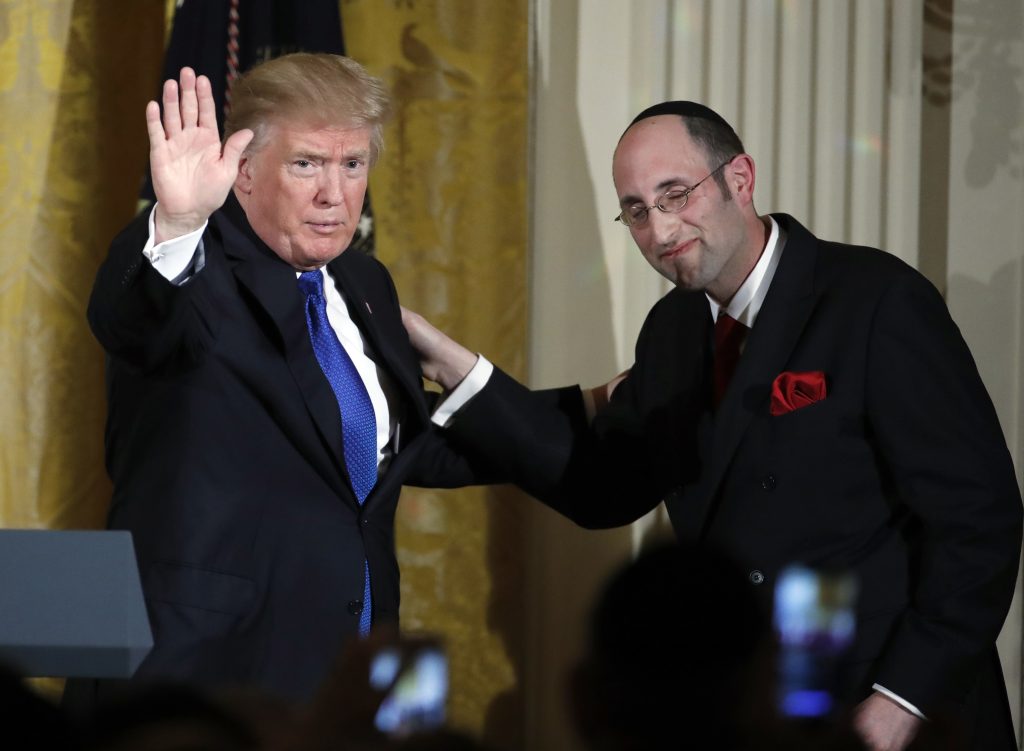 President Donald Trump on Thursday celebrated an “especially special” Chanukah at the White House, a day after declaring Jerusalem Israel’s capital and setting off criticism and clashes.

“Right now I’m thinking about what’s going on and the love that’s all over Israel and all about Jerusalem,” Trump said in the White House East Room. The president was flanked by his daughter Ivanka, who converted to Judaism, her husband, Jared Kushner, and their three children.

The president broke with decades of U.S. policy with the Yerushalayim announcement. The European Union, Germany, Britain, France, the Pope and key Arab allies have denounced the move.

But inside the White House Thursday, Trump got only applause, cheers and thanks from the crowd, which included Vice President Mike Pence, Treasury Secretary Steven Mnuchin, Holocaust survivor Louise Lawrence-Israels and Rabbi Meir Soloveichik, Rabbi of Congregation Shearith Israel in New York City.

Before the lighting, the president noted that his grandchildren follow this “sacred tradition every year at home.” He then told the history of Chanukah and “the miracle of the Maccabees.” Of Jews, he said, “You do have faith and you do have resilience,” adding, “No force has ever crushed you.” And, “Jewish people shine as a light to all nations.”

Hitting the theme of the night, he stressed that this year, it is “all about Jerusalem.” After the applause died down, he said that there are “grateful Jewish congregations” all across the world. He then noted that there were two “very special” Menorahs there for the event. One he said, was used by the first American Jewish congregation, brought here in the 1650s. The other was from the Tarnow Ghetto in Southern Poland. He said it would remain “unlit in memory of that darkest hour …  so that we never, ever, ever forget.”

He concluded, “May you all have a truly blessed and happy Hanukkah.”

“For the first time since the founding of the state of Israel, an American president has courageously declared what we have always proclaimed, which is that Jerusalem is the capital of Israel,” Rabbi Soloveichik said.

Trump struggled with the pronunciation of Soloveichik’s name. “He’s so happy with yesterday, that he doesn’t care if I get it exact,” the president said.

He also remarked of the holiday, “I think this one will go down as especially special.”