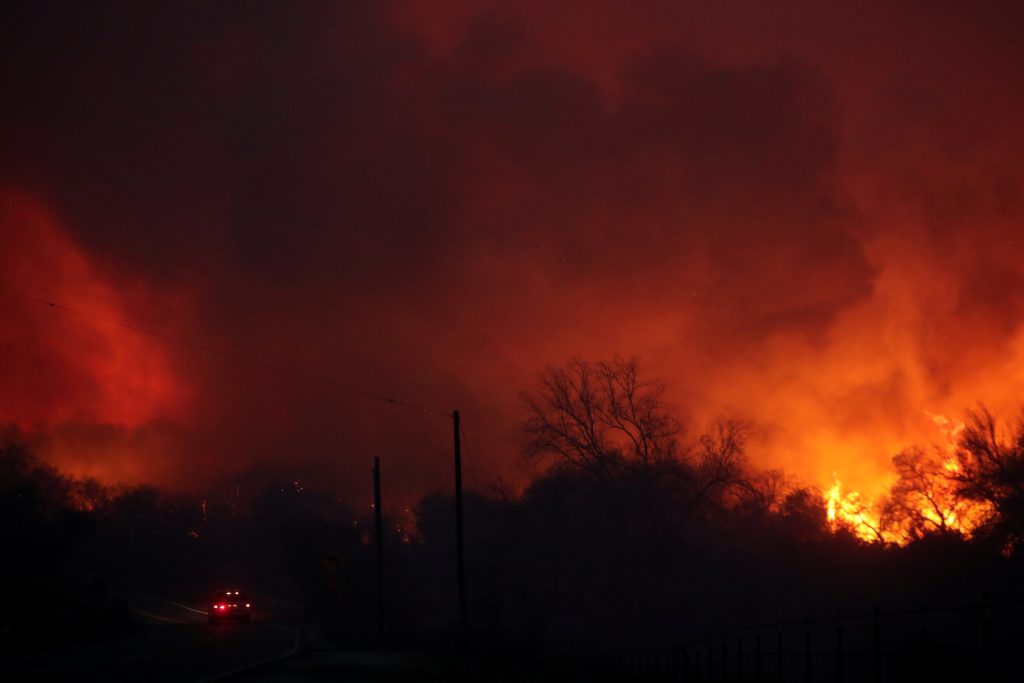 Firefighters battled several intense wind-driven wildfires early on Friday that have swept across densely populated Southern California, destroying at least 500 structures and chasing 190,000 people from their homes over the past five days.

More than 5,700 firefighters from across California and the region worked to stop the spread of six large wildfires and other smaller blazes that erupted since Monday, ranging from Los Angeles up the Pacific coast to Santa Barbara County and stoked by fierce westward Santa Ana winds.

Firefighters and helicopters sprayed and dumped bucketloads of water and fire retardant on flames against a hellish backdrop of flaming mountains and walls of smoke as the blaze hopscotched over highways and railroad tracks and torched rows of houses.

The raging fires have forced the evacuation of about 190,000 people and threatened 23,000 homes as of late on Thursday, CAL FIRE said on Twitter.

The Los Angeles Unified School District, the country’s second largest with more than 640,000 students, said it closed more than a quarter of its nearly 1,100 schools for the second day in a row on Friday. The University of California Santa Barbara canceled Friday classes as well.

The Thomas Fire northwest of Los Angeles grew to cover 115,000 acres from 96,000 acres and destroyed 439 structures, officials said. More than 2,600 firefighters from as far away as Portland, Oregon, and Nevada were battling the blaze, which was 5-percent contained.

North of San Diego, another blaze called the Lilac Fire grew from 10 acres to 4,100 acres in just a few hours on Thursday, CAL FIRE said, prompting Governor Jerry Brown to declare a state of emergency for San Diego County.

The blaze destroyed 20 structures and prompted evacuations and road closures. Propane tanks under several houses exploded from the heat, sounding like bombs, according to a Reuters photographer at the scene.

The other fires, which broke out on Monday and Tuesday, have reached into the wealthy enclave of Bel-Air on the west side of Los Angeles. Some major highways in the densely populated area were intermittently closed.

In the seaside enclave of Faria Beach, caught between burning mountains and the Pacific Ocean northwest of Ventura, fires spread down the smoking hills. Flames jumped the heavily used U.S. 101 highway and headed toward clusters of beach houses. Firefighters lined up along a railroad track, the last barrier from the flames.

Heavy smoke made breathing hazardous in some areas, and residents were urged to stay inside. Ventura County authorities said air pollution measures in the Ojai Valley were “off the charts.”

The Skirball Fire in Los Angeles has forced hundreds of residents in the wooded hills near the Bel Air neighborhood to evacuate and charred more than 475 acres.

Utilities cut power to customers in some mountain communities northeast of San Diego and east of Los Angeles to lessen fire danger. The outage could last several days.

The fires are the second outbreak to ravage parts of California this autumn. The celebrated wine country in the northern part of the state was hit by wind-driven wildfires in October that killed at least 43 people, forced some 10,000 to flee their homes and consumed at least 245,000 acres north of the San Francisco Bay area.