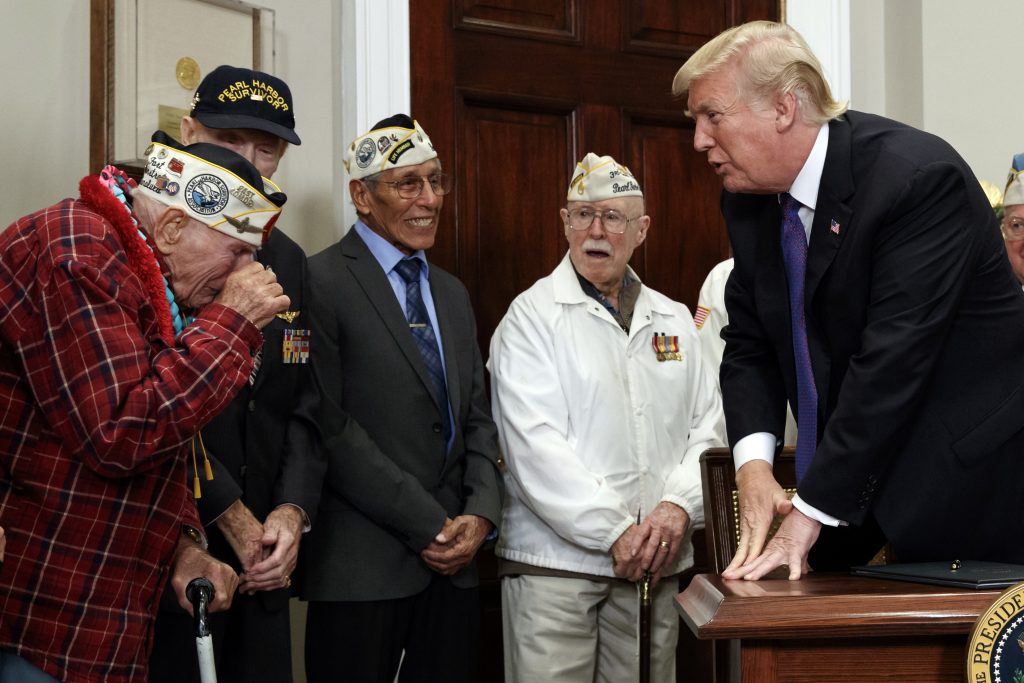 Survivors gathered Thursday at the site of the Japanese attack on Pearl Harbor to remember fellow servicemen killed in the early morning raid 76 years ago, paying homage to the thousands who died with a solemn ceremony marking the surprise bombing that plunged the U.S. into World War II.

About 20 survivors attended the event at the grassy overlooking harbor and the USS Arizona Memorial. They were joined by about 2,000 Navy sailors, officials and members of the public.

Gilbert Meyer, who lived through the Dec. 7, 1941, bombing, said he returned to pay his respects to his shipmates from the USS Utah and say a prayer for them.

The 94-year-old, who lives near Lytle, Texas, was an 18-year-old fireman first class when a torpedo hit the port side of the Utah. He said he’s still alive because he was on the ship’s starboard side.

“I think about my shipmates and how they were killed. It reminds me that we’re lucky we got off and we’ve made a good country for them,” Meyer said.

Meyer later served in the battles at Attu, Kiska, Iwo Jima and Okinawa. He witnessed Japan’s surrender in 1945 from the deck of the USS Detroit in Tokyo Bay.

Then a fighter plane painting with Japan’s World War II Rising Sun insignia strafed the Camp Makaole base where Elfring, 19 at the time, was serving. The bullets missed him by about 15 feet.

The Jackson, Michigan, man is now 95 years old. He said returning to Pearl Harbor for the anniversary of the attack makes him feel special because he’s one of the few remaining survivors.

Author Steve Twomey was scheduled to deliver the ceremony’s keynote address. Twomey wrote the book “Countdown to Pearl Harbor,” which examines the 12 days leading up to the Dec. 7, 1941, attack.

The ceremony began with a moment of silence in honor of those who lost their lives. The moment was timed for 7:55 a.m. — the same time the attack began. Four Hawaii Air National Guard F-22 fighter jets broke the silence, with one plane peeling off from the group to symbolize servicemen still missing.

The Navy and National Park Service host the ceremony each year at the same time the attack began. Usually, a Navy vessel with sailors manning the rails passes by the USS Arizona Memorial during the event. This year, a ship will not participate because of operational commitments, said Bill Doughty, a spokesman for Navy Region Hawaii.

More than 2,300 servicemen were killed in the assault carried out by Japanese airplanes. Nearly half were on the USS Arizona, which exploded and sank after it was hit by two bombs. Most of the Arizona’s fallen are entombed in the battleship, which lies at the bottom of the harbor.

After the ceremony, survivors and dignitaries were expected to ride a boat to the Arizona memorial and present wreaths in remembrance of those killed.

Japan and the U.S. became close allies after the war.