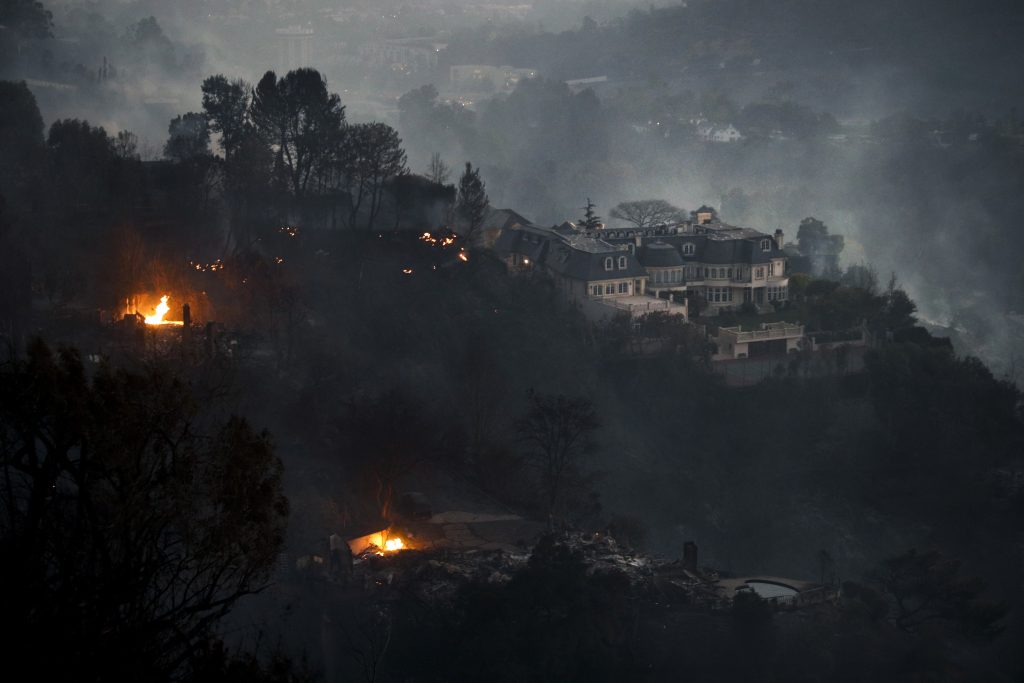 Authorities closed a major freeway Thursday as flames from the largest and most destructive Southern California wildfire jumped lanes and churned toward coastal and mountain communities northwest of Los Angeles as crews kept an eye on unpredictable winds.

A more favorable wind forecast still called for potentially dangerous gusts, but ones not likely to approach historic levels forecasters had feared, according to the National Weather Service.

“This is good news for the fire crews as the winds will not be driven quite as vigorously,” a weather service statement said.

Calmer overnight conditions helped crews protect the Ventura County resort town of Ojai (OH’hi), where most of the 7,000 residents were under new evacuation orders following a big burst of wind late Wednesday. Evacuations were also ordered for the first time in Santa Barbara County, where the coastal city of Carpinteria was under threat.

Officials closed U.S. 101 for more than a dozen miles along the coast, cutting off a major route between Ventura and Santa Barbara counties for several hours as fire charred heavy brush along lanes.

Southern California has been hit hard by four major fires that have put tens of thousands of people under evacuation orders and destroyed nearly 200 homes and buildings, a figure that is almost certain to grow.

Officials hope the electronic push will keep the region alert and the death toll from the week’s fires at zero.

In what may have been an early sign of the 140-square-mile fire getting new life, several thousand new evacuations were ordered Wednesday night in Ojai, a town of artists and resorts. The blaze had been creeping toward there already, but an increase in winds pushed it close enough for many more to flee.

Wild winds could easily make new fires explode too, as one did Wednesday in Los Angeles’s exclusive Bel-Air section, where a fire consumed multimillion-dollar houses that give the rich and famous sweeping views of Los Angeles.

Little flame was visible by late Tuesday, but Wednesday, fire exploded on the steep slopes of Sepulveda Pass, closing a section of heavily traveled Interstate 405 and destroying four homes.

Across the wide I-405 freeway from the fire, the Getty Center art complex was closed to protect its collection from smoke damage. Many schools across Los Angeles were closed because of poor air quality and classes were canceled at 265 schools Thursday.

Air tankers that had been grounded much of the week because of high winds flew on Wednesday, dropping flame retardant. Firefighters rushed to attack the fires before winds picked up again.

“We’re basically in an urban firefight in Ventura, where if you can keep that house from burning, you might be able to slow the fire down,” said Tim Chavez, a fire behavior specialist at the blaze. “But that’s about it.”