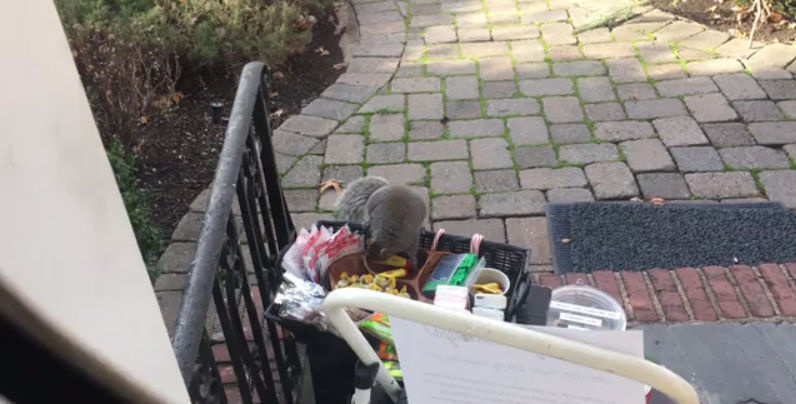 An obese squirrel was caught on video stealing gourmet chocolate and lip balm that a family leaves outside as a gift for delivery people.

Michele Boudreaux, of Maplewood, New Jersey, said on her blog that she provides candy, snacks, tissues, hand warmers and other goodies on her doorstep every year. She’s never had any issues before, but this year, her basket was raided within hours of being set outside her home.

The thief seemed to be targeting the priciest stuff, including about 25 squares of Ghirardelli chocolate, she said.

The family set up a surveillance camera to see what was going on and spotted the overweight varmint standing on a step stool, digging through the stash Tuesday.

“I mean, this squirrel is so obese — a jolly ol’ chap — he must be prepping for a decade of winters,” Boudreaux wrote.

Her husband tried to chase the squirrel to see where it was hoarding all the treats, but it made a clean getaway.

Boudreaux said she stumbled upon the thieving rodent in the act Wednesday, and recorded it taking more chocolate and a Carmex lip balm.

Her family has devised the perfect solution to the problem.

“We now have our chocolate in a jar that requires opposable thumbs,” she wrote.

The shenanigans “brought my family so much joy,” she said.

She also put a bowl of treats out for the squirrel Thursday, full of walnuts, popcorn and pumpkin seeds. The rotund rodent showed his pickiness yet again.

“He threw all the seeds out on the porch and ate all the other stuff,” she said.