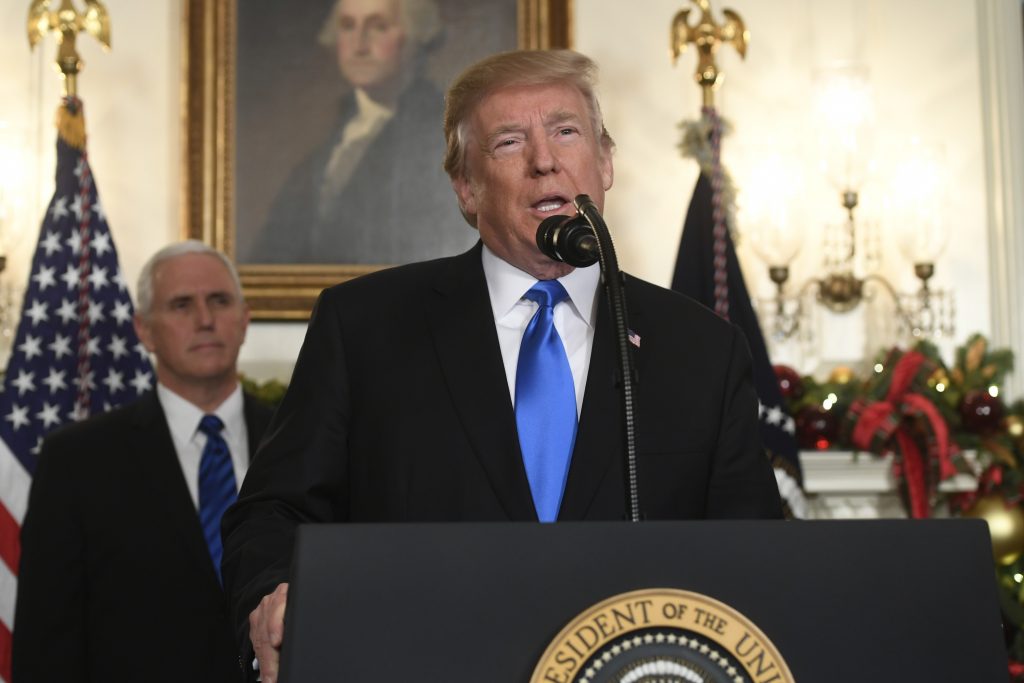 (AP/Hamodia) – President Donald Trump on Wednesday broke with decades of U.S. and international policy by recognizing Yerushalayim as Israel’s capital, and announcing the start of the process to move the U.S. embassy from Tel Aviv to Yerushalayim.

Despite appeals from Arab and European leaders, Trump declared that he was ending an approach that for decades has failed to advance the prospects for peace.

“I have determined that it is time to officially recognize Jerusalem as the capital of Israel,” he said in a White House address announcing the historic policy change, calling it “overdue” and in the best interests of the United States. “Today, we finally acknowledge the obvious: that Jerusalem is Israel’s capital,” said the president. “”This is nothing more or less than the recognition of reality. It is also the right thing to do.”

Trump also directed that the State Department begin the process of moving the U.S. Embassy from Tel Aviv to Yerushalayim. Officials said, however, that the move will take years to complete.

Trump said that the U.S. is “not taking a position of any final-status issues … or the resolution of contested borders. Those questions are up to the parties involved.”

“The U.S. remains committed to help facilitate a peace agreement that is acceptable to both sides,” said the president. “Above all our greatest hope is for peace, the universal yearning in every human soul.”

Ahead of Trump’s speech, Arab and Muslim leaders spoke about the potential for violence. In Gaza, hundreds of Palestinian protesters burned American and Israeli flags. They also waved Palestinian flags and banners proclaiming Jerusalem as their “eternal capital.”