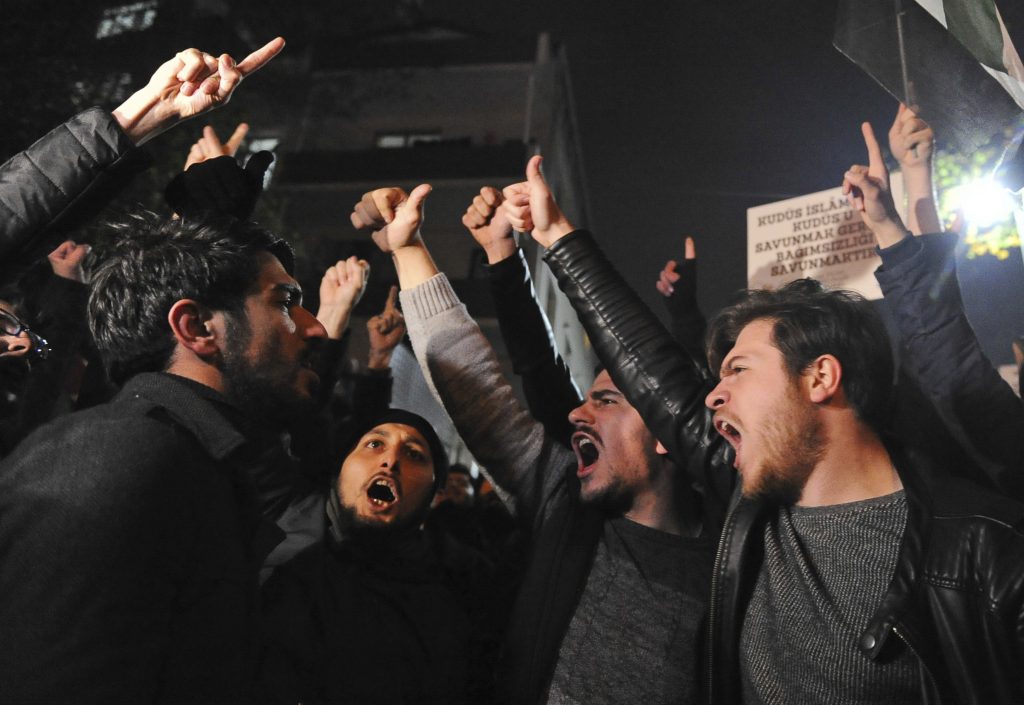 Muslims across the Middle East warned Wednesday of disastrous consequences as President Donald Trump recognized Yerushalayim as Israel’s capital, but in a region more divided than ever, many asked what leaders can do beyond the vehement rhetoric.

Arab powerhouses are mired in their own internal troubles, their populations tired of wars; and the days when Arab leaders could challenge the United States in a meaningful way are long gone.

Beyond the eruption of protests and potential explosion of violence, there is little the Arab world can do to challenge Trump’s move.

Yerushalayim is one of the very few unifying issues in an Arab world plagued by wars and sectarianism. But even the prospect of Trump recognizing it as Israel’s capital became a reason for bickering between the Middle East’s Sunni and Shiite powerhouses, Saudi Arabia and Iran, who are engaged in a catastrophic proxy war for supremacy in the region.

“If half the funds spent by some rulers in the region to encourage terrorism, extremism, sectarianism and incitement against neighbors was spent on liberating Palestine, we wouldn’t be facing today this American egotism,” Iran’s Foreign Minister Javad Zarif said in a tweet Wednesday, clearly directed at Saudi Arabia.

Criticism of Trump’s move poured in from Tehran to Ankara to war-ravaged Syria, reflecting the fears that Trump’s announcement could ignite violent protests.

Jordan’s King Abdullah II, whose country like Egypt has a peace treaty with Israel, said he expressed his concerns to Trump in a phone call Tuesday, saying that ignoring Palestinian, Muslim and Christian rights in Yerushalayim would only fuel further extremism.

He spoke at a meeting with Turkish president Recep Tayyeb Erdogan, who has invited leaders of member states of the Organization of Islamic Cooperation to an extraordinary meeting to discuss Yerushalayim’s status next week.

Egypt’s President Abdel Fatah el-Sissi also spoke to Trump on Tuesday, urging him to avoid any actions that would undermine Middle East peace.

In Gaza, hundreds of Palestinian protesters burned American and Israeli flags and waved Palestinian flags and banners, proclaiming Jerusalem as “our eternal capital” and calling recognition of it as Israel’s capital a “red line.” Hamas, the terror group that controls Gaza, called for more protests over the coming days.

Hamas official Salah Bardawil said the Palestinians were “on a dangerous crossroad today; we either remain or perish.”

In Beirut, a few hundred Palestinian refugees staged a protest in the narrow streets of the Bourj al-Barajneh camp, some of them chanting “Trump, you are mad.”

Palestinian officials, meanwhile, declared the Mideast peace process “finished.” The Palestinian prime minister, Rami Hamdallah, met with European diplomats on Wednesday and told them that the expected U.S. shift on Yerushalayim “will fuel conflict and increase violence in the entire region.”

It is not clear what, if any, concrete diplomatic action is planned.

Saudi Arabia, a regional powerhouse that could help the White House push through a Middle East settlement, has voiced strong opposition to Trump’s move, saying it would “provoke sentiments of Muslims throughout the world.”

Trump’s move puts the Sunni nation, whose king holds the title of “Custodian of the Two Holy Mosques,” in a bind. The kingdom, particularly its powerful crown prince, Mohammad Bin Salman, enjoys close relations with Trump and his son-in-law Jared Kushner — a relationship that the Saudis need and cannot afford to compromise.

While the Saudis can at least on the surface pressure Trump and distance themselves from Israelis, they will almost certainly continue to cooperate on intelligence-sharing regarding Iran.

For its part, Iran will seize upon Trump’s move to show itself the defender of Muslims — and Saudi Arabia cannot be seen as acting any less forceful in its opposition to recognition of Yerushalayim as Israel’s capital.

In 1973, Arab oil producers imposed an oil embargo against the United states in retaliation for American military support for Israel, causing soaring gas prices and straining the U.S. economy in a move that demonstrated Saudi Arabia’s power and Arab unity at the time.

Such forceful action is all but ruled out nowadays. Saudi Arabia, Jordan and Egypt have invested in good relations with the United States and are at odds with fellow Arab countries over political and religious differences. Syria, Iraq, Libya and Yemen are mired in wars and conflict, and entire cities have been laid to waste.

Sunni-led Gulf Arab states, including Saudi Arabia and the United Arab Emirates, share with Israel a deep distrust of Shiite power Iran, and their relations with Israel have somewhat thawed.

Israeli Prime Minister Benjamin Netanyahu referred to this Wednesday. While he acknowledged that Israel won’t be able to sign peace treaties with the Arabs without a deal on the Palestinians, he implied that ties have already been established and have plenty of room to grow.

“Peace treaties, no. Everything else below that, yes, and it’s happening,” he said.

Mohammed ElBaradei, a Nobel Peace Prize laureate and Egypt’s former vice president who now lives in self-imposed exile, suggested Arabs do have options, including radically reducing the billions of Arab money flowing to America and a radical downsizing of diplomatic, military and intelligence relations with the U.S.

“But if reaction will be limited to condemnations and denunciations, silence is the more honorable option,” he said in a post on Twitter.

One thing everyone did agree on Wednesday is that Yerushalyim is a powder keg and Trump’s decision will have huge implications in the region.

Reflecting opinion in much of the Arab world, two leading Lebanese newspapers issued front page rebukes to Trump over his expected announcement.

The An-Nahar newspaper compared the U.S. president to the late British Foreign Secretary Arthur Balfour, who a century ago famously promised Palestine as a national home to the Jewish People, in what is known as the Balfour declaration.

The English-language Daily Star newspaper published a full-page photo of the Old City of Yerushalayim capped by the Dome of the Rock beneath the headline: “No offense, Mr. President, Jerusalem is the capital of PALESTINE.”