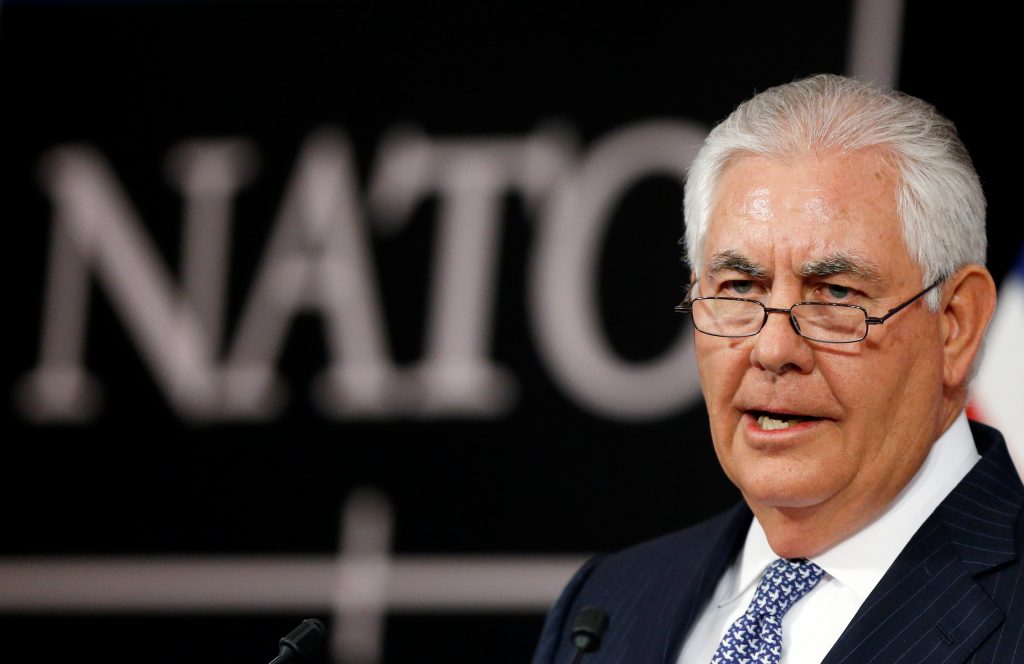 U.S. Secretary of State Rex Tillerson said on Wednesday there could be no normal relations with Russia until Moscow ended its support for separatists in Ukraine and returned Crimea, in comments likely to reassure Western allies.

Speaking after a dinner where he discussed Russia with NATO foreign ministers on Tuesday, Tillerson took a tougher stance than President Donald Trump, who has sought better relations with Russian President Vladimir Putin.

Trump said last month after meeting Putin in Vietnam that he believed Putin’s denial of accusations that Moscow meddled in the 2016 U.S. election. That was despite U.S. intelligence agencies’ evidence of Russian interference.

At NATO, Tillerson criticised “Russia’s continued use of hybrid warfare” and its attempts “to undermine Western institutions” in a reference to the mix of state-sponsored computer hacks and Internet disinformation campaigns that NATO allies’ intelligence agencies say is targeted at the West.

“This stands as a significant obstacle to normalising our relations,” Tillerson told reporters.

At the NATO dinner with ministers, Tillerson also blamed Russia for interfering in the U.S. election, said a diplomat who was present.

Trump, whose former aides are being investigated after accusations that Putin influenced the election that brought him to the White House, has repeatedly emphasized that it would be better if Russia and the United States could work together.

Tillerson, a former Exxon Mobil chief executive, has spent much of his time as secretary of state trying to smooth the “America First” foreign policy that has alarmed Trump’s allies, but the president has publicly undercut the secretary of state’s diplomatic initiatives.

His trip to Europe this week was partly overshadowed by reports the White House had a plan to replace him, which Tillerson denied on Wednesday.

Tillerson stressed to ministers that the Ukraine crisis, which was sparked by Moscow’s 2014 annexation of Crimea, was the central issue that blocked better U.S.-Russia ties because seizing sovereign territory was unacceptable, according to a second diplomat present.

The conflict between Ukrainian forces and Russian-backed separatists has claimed more than 10,000 lives since it erupted in 2014. Russia denies accusations it fomented the conflict and provided arms and fighters.

“People are still dying every day from that violence,” Tillerson said.

Tillerson, who in 2013 as head of Exxon Mobil was awarded the Order of Friendship by Putin, a Russian state honour, said he hoped to agree to deploy U.N. troops to eastern Ukraine, an idea the Russian president floated in September.

With an internationally-agreed ceasefire long broken and efforts to revive a 2015 peace deal stalled, peacekeepers could end hostilities and allow trade to resume between Russia and Ukraine.

But Tillerson warned there was still a “significant difference between the mandate that a peacekeeping force would be given and the scope of their mandate.”

“We hope we can close those gaps,” Tillerson said.

Russia is keen to see the end of Western sanctions imposed over the Ukraine crisis but European officials fear U.N. peacekeepers would freeze the conflict rather than solve it.

Tillerson also cautioned against treating Russia as a partner, saying all meetings with Moscow should be based on issues, not agreed on the basis of a calendar, quashing any hopes of a detente in Moscow’s relations with Washington.

“I think there is broad consensus among all the NATO members that there is no normalization of dialogue with Russia today,” he said.