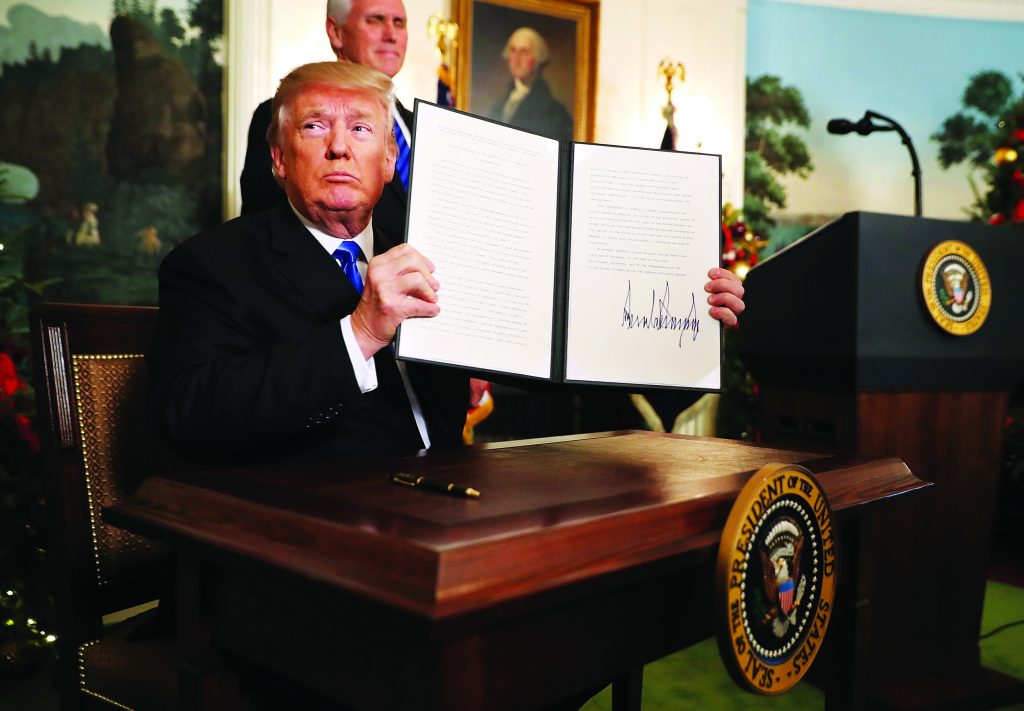 Hamodia has had several recent all-hands-on-deck moments related to Israel and its battle for recognition on the world stage.

It started almost exactly a year ago, when ex-president Barack Obama and his State Department masterminded a Security Council resolution condemning Israel for its population of Yehudah and Shomron, and continued with a UNESCO declaration that Chevron was actually a Palestinian heritage site.

The gist of our coverage was that the Torah records the purchase of Chevron by Avraham Avinu, the purchase of Kever Rachel by Yaakov Avinu and the purchase of Yerushalayim by Dovid Hamelech. It’s ours by G-d-given right, and nothing the world says can change that. As for the U.N., as Harav Moshe Wolfson, shlita, told me in an interview this past summer, we should just “yawn.”

But that doesn’t absolve the world from taking the moral high ground. President Donald Trump’s announced recognition of Yerushalayim as Israel’s capital city Wednesday was nearly uniformly praised for its moral clarity and leadership by American Jewish groups, while Republicans and some Democrats expressed support for the move.

This sentiment was echoed by Agudath Israel of America in their statement.

“Israel is a sovereign state. Sovereign states have every right to determine where their capitals are,” the group wrote. “Israel has designated Jerusalem as its capital. Jerusalem is the seat of Israel’s national government. Yet nations of the world refuse to recognize Jerusalem as the capital of Israel. This is nothing less than a travesty. … President Trump’s welcome announcement … deserves to be warmly commended.”

“To us, as believing Jews,” the Agudah statement continued, “the special status of Jerusalem is not dependent upon the formal recognition of governments or the nations of the world. To us, Yerushalayim is the Ir Hakodesh, the Holy City, the place where the Holy Temples stood thousands of years ago, the place that has been in the prayers and hearts of the Jewish people wherever they may have been through their long years of exile, the place that has been our glorious history and will forever remain our ultimate destiny.”

Jewish groups praised Mr. Trump, from the right-wing Zionist Organization of America and American Friends of Ateret Cohanim to the left-wing Anti-Defamation League and AIPAC. Some of the latter emphasized that Mr. Trump not give up on the pursuit of peace with the Palestinians.

The ADL called the move a “significant step that acknowledges reality: Jerusalem is the political capital of the country and has been the spiritual heart of the Jewish people for millennia.”

AIPAC tweeted that “when the United States ultimately relocates its embassy to Jerusalem, it will treat Israel as it does every other country with which we have diplomatic relations.”

The Orthodox Union noted that “sadly, and from our perspective wrongly, the international community has ignored the history of Jerusalem and its centrality in the lives and faith of the Jewish people. Moreover, the responsible stewardship for the holy city provided by the State of Israel is largely ignored. … While Presidents Clinton, Bush and Obama each pledged to implement this commitment, none of them did. Today, President Trump began to fulfill this promise.”

The Conference of Presidents of Major American Jewish Organizations welcomed Trump recognition as something that “rights a longstanding injustice.”

“We are deeply disturbed by statements emanating from the Palestinian Authority and others in the Muslim world threatening dire consequences, including violence, for U.S. recognition of Jerusalem as the capital of Israel,” the Conference added. “These threats echo decades of belligerence and incitement and serve to further erode the credibility of the Palestinian leadership’s commitment to resolving the conflict.”

In contrast, a statement by the Union for Reform Judaism stated that “we cannot support [Trump’s] decision to begin preparing that move now, absent a comprehensive plan for a peace process. Additionally, any relocation of the American Embassy to West Jerusalem should be conceived and executed in the broader context reflecting Jerusalem’s status as a city holy to Jews, Christians and Muslims alike.”

Excitement within the pro-Israel community in the United States stretched across social media.

Mr. Trump, one Twitter user posted shortly after the presidential address, “is the Harry Truman of our time,” referring to the president in 1948 who recognized Israel against the advice of his advisors. “Mr. President, you are the hero of the Jewish people for your stance on Jerusalem! We have waited so long for this day!”

Ben Shapiro, an Orthodox Jew seen as one of the leaders of the modern political conservative movement, tweeted that the Trump decision is “obviously an act of not only political bravery but moral courage.”

“I’ve been hearing about the Middle East peace talks for as long as I’ve been alive,” said another, who identified himself as a non-Jewish Texan. “NOTHING has ever changed, NO PEACE. At some point a stance has to be taken & President Trump is doing that by recognizing Jerusalem as the Israeli Capital. Showing we stand firmly with Israel.”

Conversely, the State Department officials and Obama administration members who have long led the peace camp were either silent on Twitter or made snide comments.

“This is going to make a longshot (peace agreement) even longer,” Aaron David Miller, who helped broker the 1993 Oslo Accords, told CNN.

Martin Indyk, who served as chief envoy to the peace process during the 1990s, tweeted that “if Trump really wanted to promote peace through recognition of J’m as Israel’s capital the minimum he needed to do was to recognize Palestinian aspirations to have their capital in East Jerusalem. The absence of any reference to Palestinian concerns dooms its chances.”

Ben Rhodes, Obama’s deputy national security advisor who led the White House’s reactions to the peace process, slammed Trump’s announcement as “so reckless” and it will make “peace” harder to attain.

“In addition to making goal of peace even less possible, Trump is risking huge blowback against the US and Americans,” he tweeted. “For no reason other than a political promise he doesn’t even understand.”

David Axelrod, Obama’s chief political advisor during his first term, tweeted: “Apparently defying his national security advisers and the counsel of all our allies but one, @POTUS recklessly and needlessly lights a fuse that could further inflame the Middle East.”

But reaction from elected officials, both Democratic and Republican, was mostly positive.

House Speaker Paul Ryan requested people to retweet his statement that “This is a day that is long overdue. Jerusalem has been, and always will be, the eternal, undivided capital of the State of Israel. The city’s status as the religious epicenter of Judaism is an historical fact — not a matter of debate.”

Democratic Senate leader Charles Schumer didn’t retweet it, but he agreed with him. He told the Weekly Standard Tuesday that he had advised Trump to go a step further and declare Yerushalayim Israel’s “undivided” capital, meaning they shouldn’t have to share it with the Palestinians.

“Why did the Trump Administration decide to declare Jerusalem the capital of Israel?” questioned Sen. Lindsay Graham (R-S.C.). “Because it always has been and always will be.”

One disappointment was the disapproval of Sen. Cory Booker (D-N.J.), who said any favor to Israel should come in return for something. He had been elected with strong Jewish support in 2014 but he angered Jewish groups over his support for the Iran nuclear deal in 2015 and opposition to the Taylor Force Act which seeks to end the Palestinian Authority’s cash rewards for terrorists.

The progressive wing of the Democratic party was mostly against Mr. Trump’s move, albeit to various degrees.

Bernie Sanders, the socialist senator from Vermont who is widely seen as the frontrunner for the Democratic presidential nomination in 2020, said that “there’s a reason why all past U.S. administrations have not made this move, and why leaders around the world have warned Trump against it: It would undermine the prospects for an Israeli-Palestinian peace agreement and severely, perhaps irreparably, damage our ability to broker it.”

“Jerusalem is the eternal capital of the Jewish homeland,” she said in a statement. “But in the absence of a negotiated settlement between Israel and the Palestinians, moving the U.S. embassy to Jerusalem now may needlessly spark mass protests, fuel tensions, and make it more difficult to reach a durable peace.”

Conservative commentators from both the establishment wing and the right bubbled with praise over the Yerushalayim announcement.

David French, a respected columnist on the venerable conservative site National Review and a prominent opponent of Trump, declared on Twitter that “the Trump administration just struck a blow against the double standards, bigotry, and vile threats of the anti-Semites. Good.”

Rich Lowry, editor of National Review, tweeted: “That Jerusalem is the capital of Israel is 1) a factual statement; 2) has long been an American consensus. Now, Trump to his great credit, is simply saying the obvious.”