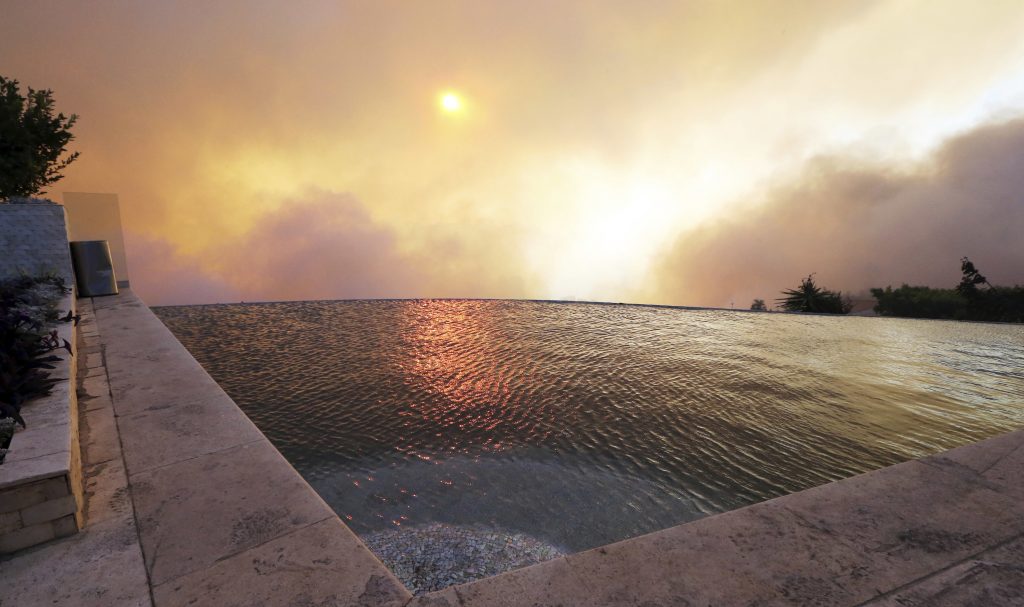 Flames exploded before dawn on the steep slopes of the east side of Sepulveda Pass, which carries heavily traveled Interstate 405 through the Santa Monica Mountains where ridge tops are covered with expensive homes. At least two could be seen burning.

Hundreds of firefighters battled flames on the ground as aircraft dropped water and retardant near neighborhoods on the east side of the pass. Commuter traffic snarled in the pass and beyond.

When firefighters told Maurice Kaboud to evacuate his home in Bel Air, he decided to stay and protect his home. The 59-year-old stood in the backyard of his multimillion-dollar home as fires raged nearby.

“G-d willing, this will slow down so the firefighters can do their job,” Kaboud said.

Hundreds of homes burned in the area during the famous Bel Air Fire of 1961. The Getty Center art complex, on the west side of the pass, employs extensive fire protection methods. Its website says it was closed to protect its collection from smoke.

Elsewhere, use of firefighting aircraft has been constrained by the same winds that have spread the fires.

The planes and helicopters essential to taming wildfires have been mostly grounded because it’s too dangerous to fly them in the strong wind. Tuesday saw gusts of over 50 mph (80 kph).

Commanders hoped to have them back in the air Wednesday to battle flames that spurred evacuation orders for nearly 200,000 people, destroyed nearly 200 homes and remained mostly out control.

“The prospects for containment are not good,” Ventura County Fire Chief Mark Lorenzen said at a news conference Tuesday.

Southern California’s Santa Ana winds have long contributed to some of the region’s most disastrous wildfires. They blow from the inland toward the Pacific Ocean, speeding up as they squeeze through mountain passes and canyons.

The largest and most destructive of the fires, a 101-square-mile (262-sq. kilometer) wildfire in Ventura County northwest of Los Angeles, had nearly reached the Pacific on Tuesday night after starting 30 miles (48 kilometers) inland a day earlier.

The wildfire jumped the major artery U.S. Highway 101 to a rocky beach northwest of Ventura, bringing new evacuations, though officials said the sparse population and lack of vegetation in the area meant it was not overly dangerous, and the highway was not closed.

The fire had destroyed at least 150 structures, but incident commander Todd Derum said he suspects hundreds more homes have already been lost. Firefighters have been unable to assess them.

Lisa Kermode and her children returned to their home Tuesday after evacuating Monday to find their home and world in ashes.

“We got knots in our stomach coming back up here,” Kermode said. “We lost everything, everything, all our clothes, anything that was important to us. All our family heirlooms — it’s not sort of gone, it’s completely gone.”

Mansions and modest homes alike were in flames in the city. Dozens of houses in one neighborhood burned to the ground.

John Keasler, 65, and his wife Linda raced out of their apartment building as the flames approached, then stood and watched the fire burn it to the ground.

“It is sad,” Keasler said. “We loved this place. We lost everything.”

Linda Keasler said they were just glad to be alive despite losing so much.

“Those things we can always get back,” she said. “The truth is it is just things and thank G-d no one died.”

Some 12,000 structures were under threat.

A spokesman for the American Red Cross expected a shelter in Ventura County to be at capacity Tuesday night. Fred Mariscal said the shelter is serving meals, providing a mobile shower truck and has doctors and nurses on hand to provide medication for residents who were displaced by the wildfire.

While the blazes brought echoes of the firestorm in Northern California that killed 44 people two months ago, no deaths and only a handful of injuries had been reported.

In the foothills of northern Los Angeles, 30 structures burned. Mayor Eric Garcetti said the gusty winds expected to last most of the week had created a dangerous situation and he urged 150,000 people under mandatory evacuation orders to leave their homes before it’s too late.

“We have lost structures, we have not lost lives,” he said. “Do not wait. Leave your homes.”

Fires are not typical in Southern California this time of year but can break out when dry vegetation and too little rain combine with the Santa Ana winds. Hardly any measurable rain has fallen in the region over the past six months.

Fires in suburban settings like these are likely to become more frequent as climate change makes fire season a year-round threat and will put greater pressure on local budgets, said Char Miller, a professor of environmental analysis at Pomona College who has written extensively about wildfires.

“There are going to be far greater numbers that are going to be evacuated, as we’re seeing now,” Miller said. “These fires are not just fast and furious, but they’re really expensive to fight.”