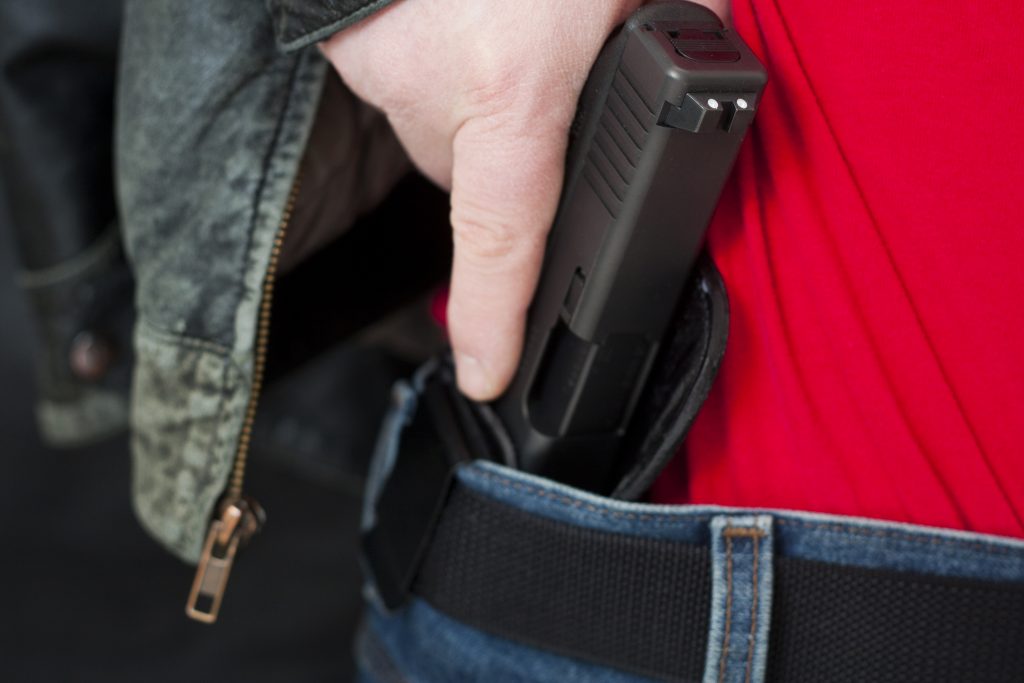 Republicans passed a bill through the House on Wednesday that would make it easier for gun owners to legally carry concealed weapons across state lines, the first significant action on guns in Congress since mass shootings in Nevada and Texas killed more than 80 people.

The measure would allow gun owners with a state-issued concealed-carry permit to carry a handgun in any state that allows concealed weapons. It now goes to the Senate.

Republicans said the reciprocity measure, a top priority of the National Rifle Association, would allow gun owners to travel freely between states without worrying about conflicting state laws or civil suits.

Rep. Elizabeth Esty (D-Conn.) called the bill an attempt to undermine states’ rights, “hamstring law enforcement and allow dangerous criminals to walk around with hidden guns anywhere and at any time. It’s unspeakable that this is Congress’ response to the worst gun tragedies in American history.”

Esty represents Newtown, Connecticut, where 20 first-graders and six educators were fatally shot in 2012.

Former Rep. Gabrielle Giffords (D-Ariz.), who was shot in the head in 2011, denounced the House action.

“I’m angry that when this country is begging for courage from our leaders, they are responding with cowardice,” she said in a statement.

The House vote came as the acting director of the Bureau of Alcohol, Tobacco, Firearms and Explosives said his agency expects to regulate bump-stock devices and could end up banning them. Thomas Brandon told the Senate Judiciary Committee on Wednesday that the ATF and Justice Department would not have initiated the review “if (banning them) wasn’t a possibility at the end.”

The Justice Department announced this week it is reviewing whether weapons using bump stocks should be considered illegal machine guns under federal law. The review comes after a Las Vegas gunman used the device during an October rampage that killed 58 people and wounded hundreds more. Bump stocks allow semi-automatic rifles to fire nearly as fast as an automatic rifle.

Debate on the House bill became heated at times.

Rep. Earl Blumenauer (D-Ore.) said his state forces gun owners to meet an array of conditions before obtaining a concealed-carry permit — in contrast to some states where “if you’re 21 and have a pulse” you can get a gun permit.

Rep. Bob Goodlatte (R-Va.), chairman of the House Judiciary Committee, said those who carry concealed handguns not only are better prepared to defend themselves, but can help others. He cited 2015 incident in which an Uber driver shot and wounded a gunman who was firing into a crowd of people in Chicago.

“Without this citizen’s quick thinking and actions, who knows how many could have fallen victim to this shooter?” Goodlatte asked.

He and other Republicans compared the concealed-carry permit to a driver’s license that is valid in any state.

Rep. Ed Perlmutter (D-Colo.) scoffed at that notion. “Georgia has no business, no right, to tell Colorado what its laws should be,” he said.

“If more guns made people safer, we’d be the safest country on earth,” said Rep. Carolyn Maloney (D-N.Y.). “We’re far from it.”

Democrats also criticized Republicans for including a bill on background checks in the concealed-carry legislation. The measure would strengthen the FBI database of prohibited gun buyers after the Air Force failed to report the criminal history of the gunman who slaughtered more than two dozen people at a Texas church.

The Air Force has acknowledged that the Texas shooter, Devin Kelley, should have had his name and domestic violence conviction submitted to the National Criminal Information Center database. The Air Force has discovered several dozen other such reporting omissions since the Nov. 5 shooting.

Rep. Jerrold Nadler of New York, top Democrat on the House Judiciary panel, said the background-check provision “actually would save lives and should not be tethered” to the concealed-carry reciprocity bill. He called it a cynical maneuver to force Democrats to cast a politically unpopular vote against background checks.

The legislation also would order the Justice Department to study bump stocks, including how often they are used in a crime.

Sen. John Cornyn of Texas, the No. 2 Republican in the Senate, co-sponsored a bipartisan bill bolstering the National Instant Criminal Background Check System, or NICS.

While he supports the concealed-carry measure, “I think it’s a mistake to try to combine this with the ‘Fix NICS’ background check,” Cornyn told reporters.