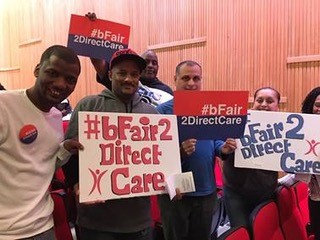 Battling for a higher minimum wage, hundreds of direct-care workers for New Yorkers with mental disabilities rallied Monday with elected officials and other community leaders to urge Albany to speed up a plan to pay them a living wage.

“We’ve heard Albany say this will be a tough budget year. But when you’re a 20-year direct-support professional and still making $12 or $13 an hour, every year is a tough budget year,” said Tom McAlvanah of the Interagency Council for Developmental Disabilities Agencies.

“The wages that can be paid,” he added, “come nowhere near matching the work they do, nor are they enough to live on. We’re hoping Albany will hear us again and come through for our workers.”

The state provides funding for non-profits that support people with autism, Down syndrome, cerebral palsy and other disabilities and from which they can pay salaries. Because of new wage mandates and higher wages offered by other businesses, these non-profits struggle to recruit and retain staffers.

These non-profits receive almost all their funding from the government and provide services on behalf of the state government. The state budget passed earlier this year includes the first of six installments to raise funding levels to $15 an hour over six years. Rally participants said they cannot wait so long for the added funding.