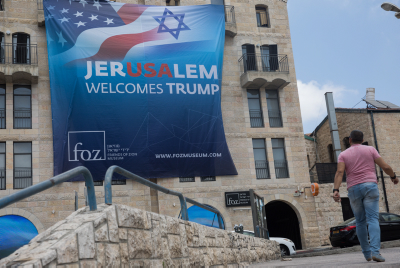 President Donald Trump was speaking on Tuesday with a number of Middle East leaders, the White House said, in advance of his expected announcement about the U.S. embassy in Israel.

“The president has calls scheduled this morning with Prime Minister Netanyahu, King Abdullah of Jordan and Palestinian Authority President Abbas. We will have a readout on these calls later today,” Sanders said.

Sanders said that President Trump is likely to speak with other counterparts Tuesday. She did not identify them, as those calls haven’t been confirmed.

Vociferous Arab and Muslim opposition to any possible U.S. recognition of Yerushalayim as Israel’s capital was building up Tuesday.

Nabil Shaath, adviser to Abbas, told journalists that any announcement along those lines would wreck peace efforts.

“If Mr. Trump really tomorrow or the day after tomorrow comes up and says that ‘I recognize united Jerusalem to be the capital of the state of Israel’ he has destroyed every chance that he will play to get the deal of the century that he has been talking about.”

The Arab League and Saudi Arabia repeated past warnings, following statements by France and Jordan in recent days.

The diplomats and leaders did not spell out what the consequences might be of any announcement.

Trump’s impending decisions, follow intense internal deliberations in which the president has personally weighed in, one White House aide said.

The president pledged during the election campaign trail last year that he would move the embassy from Tel Aviv to Yerushalayim. But in June, Trump waived the requirement, saying he wanted to “maximize the chances” for a new U.S.-led push for what he has called the “ultimate deal” of Israeli-Palestinian peace. Those efforts have made little, if any, progress so far and many experts are skeptical of the prospects for success.