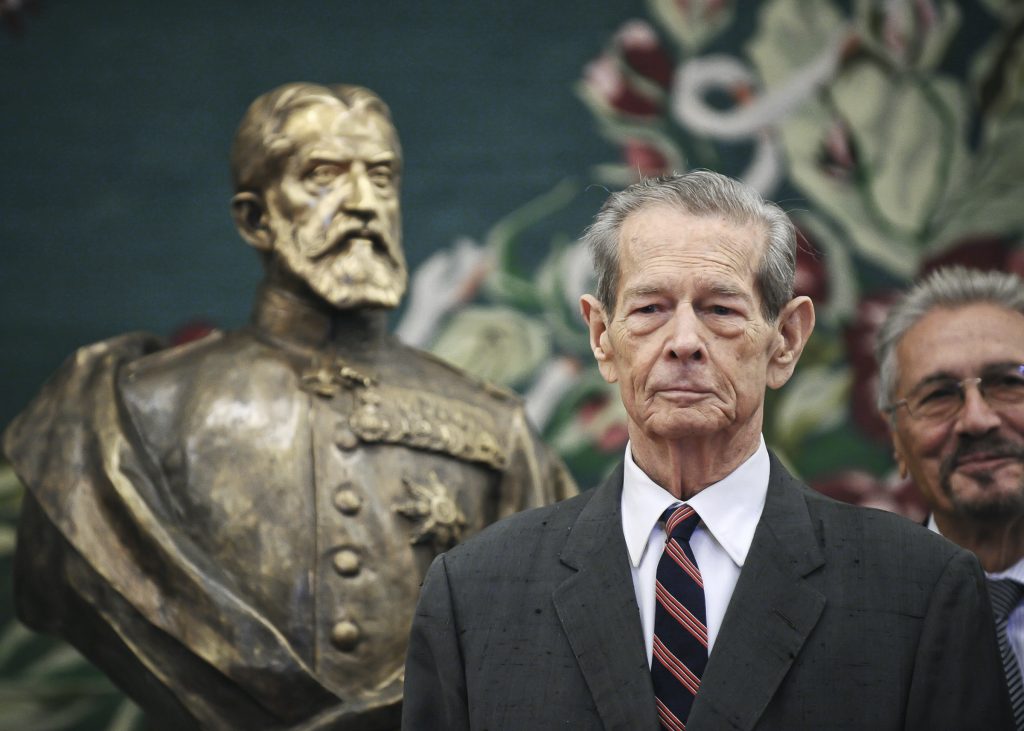 Former Romanian King Michael I, who was forced to abdicate by the communists in the aftermath of World War II, died on Tuesday. He was 96.

Michael, who played a pivotal role in Romania’s switch to the Allied cause following a coup in 1944, spent decades in exile working as a chicken farmer and aircraft pilot. He finally got his citizenship back in 1997, eight years after the collapse of communism.

Michael’s death leaves only two people alive who headed their nations during the war — former King Simeon II of Bulgaria, and the Dalai Lama of Tibet, both of whom were children at the time.

In a statement, the Romanian royal house said that Michael died in his residence in Aubonne, Switzerland. Michael had been suffering from leukemia and another type of cancer and last year withdrew from public life, handing over his responsibilities to his oldest daughter.

Michael’s body will be flown to Romania and will lie in state for two days at the Royal Palace in Bucharest. No funeral plans were immediately available.

Michael, a great-great grandson to Britain’s Queen Victoria, acceded to the throne in 1927 when he was six years old, after his father Carol II abdicated. After three years, Carol returned to the throne and stayed there until abdicating again in 1940 and Michael became king for a second time.

Michael reigned for seven years until he was forced to abdicate.

Michael’s reign is best remembered for his coup on Aug. 23, 1944, against pro-Nazi leader Marshal Ion Antonescu, which took Romania into the war on the side of the Allies. For this, he was awarded Chief Commander of the Legion of Merit by U.S. President Harry S. Truman and was decorated with the Soviet Order of Victory by Joseph Stalin.

Romania’s switch gave the Soviets the opportunity to advance into the country. After the war, Michael was little more than a figurehead as the Soviets installed a communist-led government, and Romania became part of the Warsaw Pact.

Many thought that he would remain in exile in London after his arrival for the wedding of Princess Elizabeth to his cousin Prince Philip of Greece in November 1947. However, he was summoned to the Elisabeth Palace in Bucharest and told to sign a pre-typed abdication or else 1,000 soldiers would be executed.

The communist government abolished the monarchy on the day of his abdication. Romania’s was the last monarchy in the Warsaw Pact countries to fall. Michael was then stripped of his citizenship.

After his abdication, Michael settled with his wife and five daughters in Switzerland and later Britain, where he worked as a test pilot and chicken farmer.

On Dec. 25, 1990, a year after the revolution that overthrew the Communist dictatorship of Nicolae Ceausescu, Michael and several other members of the royal family entered Romania for the first time in 43 years. Using a Danish diplomatic passport, Michael was able to obtain a 24-hour visa. He intended to reach Curtea de Arges Cathedral and pray at the tombs of his royal ancestors. However, Michael and his companions were stopped by tanks, taken to the airport and forced to leave the country.

In 1992, however, the government allowed Michael to return to Romania, where more than a million people turned out to see him. His popularity alarmed President Ion Iliescu, and Michael was forbidden to visit Romania again for five years.

A year after Iliescu’s defeat to President Emil Constantinescu in 1996, the Romanian government restored Michael’s citizenship, allowing him back into the country. Savarsin Castle in western Romania was returned to him while the Elisabeth Palace in Bucharest was made his residence. Though Romania remains a republic, the royal house looks after the family’s properties and bestows honors.

Michael’s relations with the country’s leaders following his return were often uneasy. In 2010, President Traian Basescu accused Michael of being a traitor for abdicating and signing an armistice with the Soviets.

On his 90th birthday in 2011, Michael addressed Parliament for the first time in 65 years and attacked the country’s post-communist leaders.

“Tomorrow’s world cannot exist without morals, without faith and memory. Cynicism, narrow interests and cowardice mustn’t occupy our lives. They remind us too much of the years before 1989,” he said while sitting on a throne-like chair.

Romanians associate their royal family, particularly Michael, with elegance and dignity, in sharp contrast to their views of the political class.

Born Oct. 25, 1921, Michael married Anne of Bourbon-Parme in 1948. She died in August 2016. They are survived by five daughters, the eldest of whom, Princess Margareta, will succeed him as head of the royal family.

As great-great-grandson of Britain’s Queen Victoria, Michael was also related to the Danish, Spanish, Norwegian and Swedish royal families.