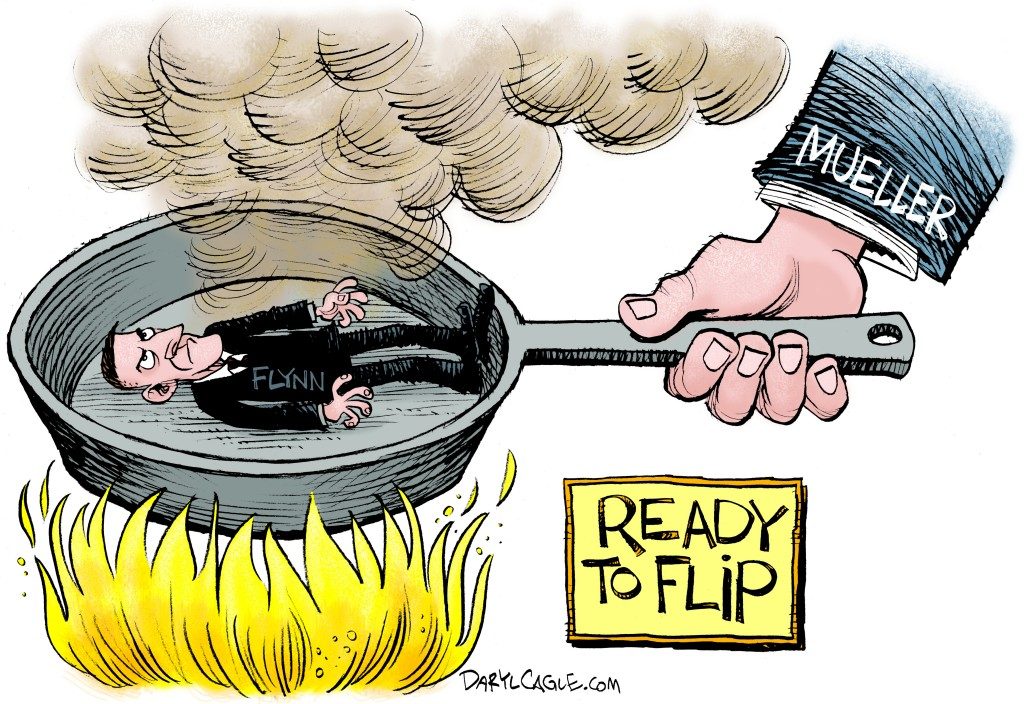 “But don’t write anything that appears already on the wires,”
I was warned by my editor when I went to clear the op-ed subject.

Nope. What I write here is exclusive to Hamodia, a one-off analysis you won’t find anywhere else. In an era when allowing people to stop carrying medical insurance gets heralded as “Trump knocking 13 million off insurance rolls,” it’s time for another round of slow-reading the news so you don’t get mixed up.

Yeah, this past week has been a brutal one for President Trump and his team. He got a truly historic tax bill through the House and Senate but the media is only focusing on Pocahontas, plea bargains, Flynn and questions if he flipped. Even the dramatic on-air gulping of cyanide by a Croatian general seconds after his conviction was upheld by The Hague failed to wrest the nation’s attention from the gripping spectacle playing out in D.C.

But I promised you several months ago that there was as much proof of collusion with Russia as there was snow in Havana. And that still stands.

Here are a couple of points you must read to understand the political maelstrom striking Washington like an earthquake in Delaware.

First of all, I have nothing but compassion for Michael Flynn, a decorated general who was pushed to the brink of emotional and financial despair as a sacrifice to Democratic hatred. When Pres. Trump was elected, a call went out that he must be impeached or made inoperable ASAP. Flynn was merely an early and easy victim to bite at, with the bigger prize a bit higher up.

So what did Flynn do? For one, he spoke to Russia’s ambassador to the U.S., Sergey Kislyak, four times during the transition. Flynn had the national security portfolio and it was his job to get the campaign up to speed about all the world’s trouble spots.

Three of the conversations Flynn had with Kislyak related to the Obama administration’s imposing sanctions on Russia for allegedly meddling in the election and the other was about the disastrous U.N. vote condemning Israel. Flynn got an assignment that in the interests of the incoming Trump administration it would be better to not let the situation blow up. Pres. Trump wanted to work with Russia on IS and Syria and he wanted to make peace in Israel.

That’s it. Eto ono, as they say in Russian.

What gets iffy here is the fact that Flynn apparently didn’t tell anyone outside his immediate group of colleagues about these phone calls. So when Vice President Mike Pence was asked in an interview whether the transition team had any contacts with the Russians, he answered no.

When President Trump heard that his top aide had indeed spoken to the Russian ambassador, he was furious over the falsehood inadvertently uttered by his vice president and fired Flynn.

In the meantime, the FBI under James Comey was doing its own Russia investigation. They also spoke to Flynn and inexplicably Flynn also told them that he had no contact with the Russians.

This was the entire story that happened over the weekend. Flynn pleaded guilty to lying to the FBI.

Nothing here is new. The alleged lies Flynn admitted to were the same that got him fired from the White House in February.

But those out there who are hoping to get Pres. Trump fired are milking this like a Holstein. The dream fairy has been getting so much overtime last week, the Consumer Financial Protection Bureau needed two directors to cope. The election would be canceled and Hillary Clinton would be the president! Barack Obama gets a third term! Maybe even FDR can come back to complete his fourth term.

But the fact is, the single count special counsel Robert Mueller made him plead guilty to was lying. That is a gift to Pres. Trump, if it ever comes down to his word against his. If you had a cooperating witness against anyone, let alone the most powerful man in the country, you don’t weaken yourself by charging him with lying.

This makes me wonder if there’s any “there” there. Probably more where than there.

But the mojos in the media don’t like that. So they’ve increasingly been talking up the Logan Act, a law dating back to 1799 passed after George Logan played diplomat and held unauthorized negotiations with France. The problem is that the law has never before been enforced.

And Trump haters would not want to break that precedent, especially given ex-president Obama’s trip to Asia last week in which he openly defied government policy as enunciated by the current administration. He lamented that at the moment we have a “temporary absence of American leadership” on alleged climate change and pushed individual states to ignore Pres. Trump on the issue.

There’s also another former Democratic president who has made a career of ignoring the Logan Act. Jimmy Carter, who has criticized successor presidents yet strangely refuses to run for a second term denied him by Ronald Reagan, has made unilateral deals with North Korea and Cuba, to name just a deplorable two.

Just one last thought niggling at my mind.

ABC News fired reporter Brian Ross on Saturday for making up a story that Flynn had spoken to the Russians on Pres. Trump’s orders as a candidate. That bombshell may have indeed made news. But it was fake news and people don’t like news proven to be fake so ABC fired Ross.

Why do we never hear stories of people making up stories in Pres. Trump’s favor? Why is Brian Ross allowed to get away with three major lies over the span of a few short years, all of them making up stories about Republicans?

And why do we find that the FBI agent in Mueller’s team who sent text messages was fired because they were anti-Trump? With half the population having voted for him, why is that not mirrored in the establishment and the law enforcement agencies?

I’ve said this before and I’ll say it again. The anti-Trump forces hate him because of the decency and good he’s bringing back to the country after eight years of social vulgarity. Keep your eye on the prize and don’t get distracted by the noise.n