World U.K. Agrees to ‘Regulatory Alignment’ on Both Sides of Irish Border
World 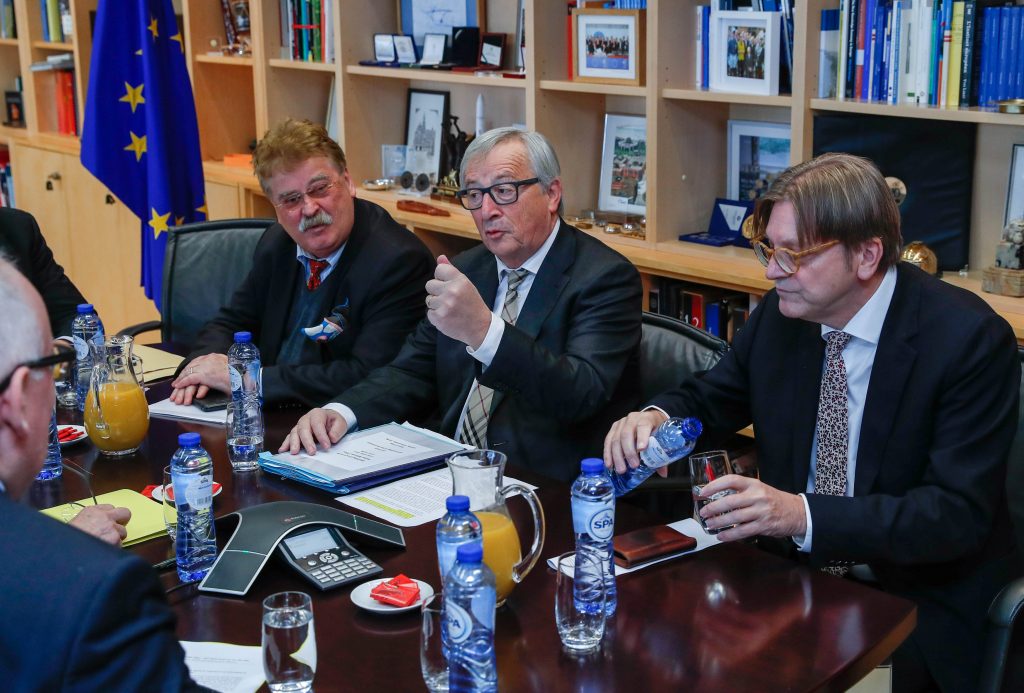 After intensive negotiations in recent days, Britain made what the Irish sources called a clear commitment to keep economic rules on both sides of the new U.K.-EU land border across the island of Ireland similar enough to allow no frontier – and so ease fears of stirring up conflict again in Northern Ireland.

News of a deal, by raising the prospect of starting trade negotiations in the coming weeks, lifted the sterling.

It triggered speculation that it could result in the whole of the United Kingdom effectively remaining in a customs union, or even the EU single market, despite May’s insistence that it would not do so.

The pro-British Northern Irish party on which May relies for support in parliament immediately insisted rules on the British mainland must not deviate from those in Northern Ireland, a position May herself supports. As a result, it is hard to see that Britain could itself stray far from EU regulations.

That idea was immediately embraced by the leaders of London and Scotland, two major British regions where voters strongly opposed Brexit in last year’s referendum. Scotland’s first minister and the mayor of London both repeated their wish to stay in a customs union or, better, the EU single market.

That is a position May’s hard-line pro-Brexit supporters would not countenance, underlining the conundrums that the Irish border and other complex issues have raised over Britain’s ability to make a clean break after 44 years of EU membership.

“Agreement has been reached on an overall deal for the Irish issues,” one of the Irish government sources said.

“The key phrase is a clear commitment to maintaining regulatory alignment in relation to the rules of the customs union and internal market which are required to support the Good Friday Agreement, the all-island economy and the border.”

Irish Foreign Minister Simon Coveney said he hoped to make a positive statement shortly, adding that British-EU negotiations on post-Brexit trade would start. The Irish border, which is now completely unguarded and barely even marked, would not change its physical appearance after Britain leaves the EU, he said.

Donald Tusk, the EU summit chair, tweeted ebulliently after speaking to Varadkar that there was good progress on the Irish issue to unblock U.K.-EU trade talks: “Getting closer to sufficient progress at December [EU summit],” the former Polish premier wrote.

This is code for Britain complying with a set of conditions the EU wants met on divorce terms before leaders will agree to launch talks on a future trade deal at a summit next week.

May and Juncker made no comment to reporters when they met at the EU executive’s Berlaymont headquarters for a lunch that diplomats and officials hope can seal a breakthrough that would open the way to negotiations on future trade relations.

Officials said he was preparing to call EU leaders to get agreement on trade negotiations. National envoys handling Brexit were also summoned urgently to a meeting in Brussels later on Monday.

London has broadly agreed to many of the EU’s divorce terms, including paying out something like 50 billion euros. But the issues of the rights of expatriate citizens and the U.K.-EU border on the island of Ireland defied a deal until the last minute.

Elmar Brok, another member of the European Parliament who met Juncker and his Brexit negotiator, Michel Barnier, before they met May, said “just a few words” separated the sides.

In London, May’s spokesman said, “Progress is being made. There’s more still to agree upon.”

Dublin, backed by the rest of the EU, wants strong assurances that London will commit to keeping business regulations in Northern Ireland the same as in the EU.

Britain is seeking to keep its options open, having rejected a commitment to leave Northern Ireland in a full customs union with the EU or to keep the whole United Kingdom in one.

Juncker and Barnier met the European Parliament’s Brexit team to brief them on progress. The legislature, which must approve any withdrawal treaty if a disruptive Brexit is to be avoided in March 2019, has demanded that EU courts have the final say in guaranteeing rights for 3 million EU citizens in Britain. Britain insists that it will no longer accept the supervision of the European Court of Justice.