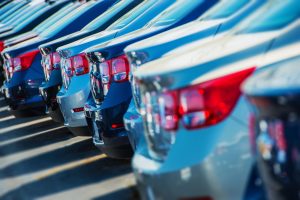 Volkswagen’s sales dropped 1.6 percent as it continues to rebuild its reputation after its diesel emissions scandal.

Ford’s increase was helped by the sale of 72,769 F-series pickup trucks, up 1 percent from November 2016. F-series sales far exceeded the combined sale of all Ford and Lincoln brand passenger cars, which totaled about 45,000.

Despite that, Ford posted a 5.2 percent increase in sales of its Ford brand passenger cars, reflecting a 44.9 percent jump in sales of the Focus.

Ford’s Edge crossover and Explorer SUV were up 22.5 percent and 24.8 percent, respectively.

At Fiat Chrysler, only Chrysler of its four major brands posted an increase (14 percent), aided by a 51 percent gain in sales of the Pacifica minivan.

As rivals General Motors and Ford have done over the past year, Fiat Chrysler is trying to reduce sales of less-profitable vehicles to daily rental companies. Historically Fiat Chrysler was more dependent on those sales than most other automakers.

Through the first ten months of 2017, fleet sales represented 20.4 percent of the company’s total sales, the lowest level since 2001, according to spokesman Ralph Kisiel.

GM said in a release that sales to commercial and government fleets rose 7 percent, driven by a 30 percent increase in full-size pickup sales and a 35 percent increase for the Chevrolet Tahoe Police Pursuit Vehicle. But total fleet sales were down 13 percent after a 24 percent reduction in daily rental deliveries.

The sales picture was mixed for several other automakers.

The Toyota was down 2.4 percent, and the luxury Lexus brand was down 6.7 percent, according to the Japanese automaker.

Jack Hollis, Toyota division group vice president and general manager, however, noted that light trucks “continue to shine” for Toyota, the RAV4 SUV remains a hit and the Camry, which was updated this year, had its best-ever November.

Nissan delayed its release of U.S. sales figures for the month until Monday because of a mechanical failure that caused a systems outage.

Even though automakers are clearing inventories of 2017 models as production of model year 2018 vehicles increases, consumers are gravitating toward more expensive, fully equipped vehicles.

The average new vehicle sold for a record $35,870 in November, 1.6 percent higher than a year earlier and up 0.2 percent from the average price in October.