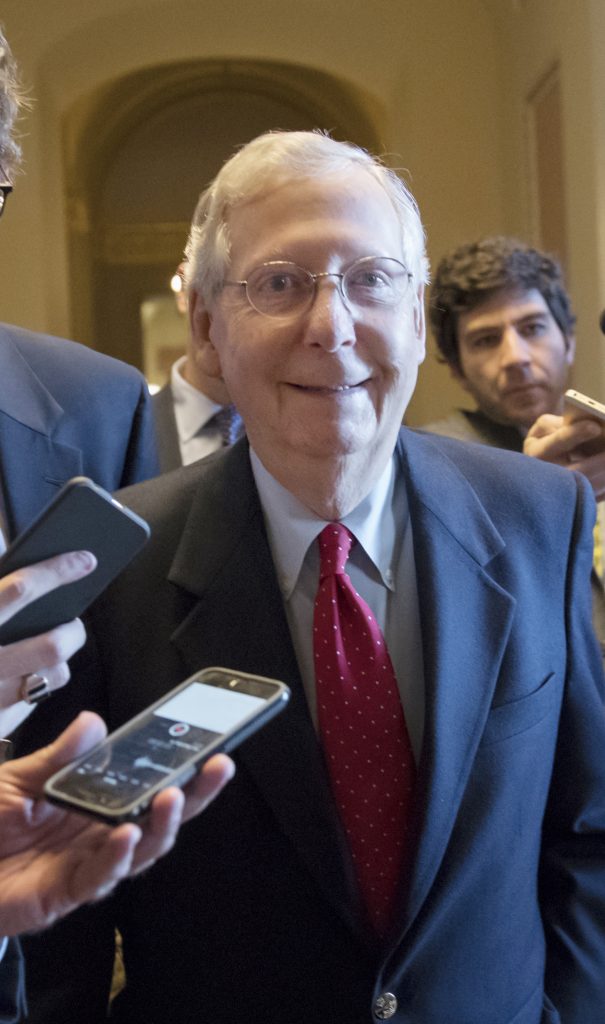 Senate Republicans steamed toward passage of a $1.4 trillion tax bill Friday, overcoming eleventh-hour hitches in their drive to deliver a major legislative accomplishment to President Donald Trump before the end of the year.

“We have the votes,” Senate Majority Leader Mitch McConnell said after a closed-door meeting of Republican senators.

One prior holdout, Sen. Jeff Flake, R-Ariz., announced that he would support the bill. And another, Sen. Susan Collins, R-Maine, came close.

Collins said she had won an agreement to add a deduction for local property taxes. Still, she was coy about whether she ultimately would vote for the bill.

Smiling, Collins said, “I’m pleased with the progress that’s being made but I’ll announce my position in a couple of hours.”

With the party controlling the Senate 52-48 and Democrats uniformly opposed, Republicans need 50 votes to win approval for the bill. Vice President Mike Pence would break a tie.

Momentum for the measure was boosted earlier Friday when Sen. Ron Johnson, R-Wis., declared he would vote for it. Johnson said leaders had agreed to make tax breaks more generous for millions of businesses, which he’s been demanding for weeks.

“I sought assurance and I was given assurance that I will be at the table” when Senate-House bargainers write a compromise version of the bill, Johnson said of talks he had with GOP leaders Thursday night.

Senate passage would push Congress a step closer to the first rewrite of the nation’s tax code in three decades.

The bill seemed to be sailing toward passage Thursday, until a report was released by Congress’ nonpartisan Joint Committee on Taxation estimating that the package would produce budget deficits totaling $1 trillion over the coming decade.

Trump administration officials and leading congressional Republicans have said the measure’s tax cuts would spark enough economic growth to pay for the lowered levies. But the Joint Committee on Taxation’s projection left the votes of several GOP lawmakers in doubt, including Corker and Flake.

Amid a whirl of meetings and dramatic votes Thursday evening, the Senate GOP leaders were rewriting the bill behind closed doors. Changes being discussed included rolling back some of the tax cuts after six years to appease deficit hawks — notably Flake and Sen. Bob Corker, R-Tenn.

At stake is a top priority for Trump and a Republican Party that considers passage of the measure the best way to preserve the GOP’s congressional majorities in next year’s midterm elections.

Another faction to be reckoned with: senators supporting millions of businesses whose owners report the firm’s profits on their individual tax returns. The vast majority of U.S. businesses, big and small, are taxed this way. Sen. Steve Daines, R-Mont., backed the tax legislation Wednesday after securing an increase in the deduction for business income from 17.4 percent to 20 percent.

Johnson said Friday that he was won over after GOP leaders offered to boost that deduction to 23 percent.

In a dramatic turn Thursday, Democrats forced a vote on whether to return the measure to the Senate Finance Committee so it could be rewritten to ensure smaller deficits. After holding out for nearly an hour during the vote, Corker, Flake and Johnson eventually joined fellow Republicans to scuttle the Democratic proposal.

Corker has pushed to add automatic tax increases in future years if the package doesn’t raise as much revenue as projected.

The overall legislation would bring the first overhaul of the U.S. tax code in 31 years. It would slash the corporate-tax rate, offer more modest cuts for families and individuals and eliminate several popular deductions.

Unlike the tax bill passed by the House two weeks ago, the Senate measure would end the requirement in President Barack Obama’s health care law that people pay a tax penalty if they don’t buy health insurance.

The tax cuts for individuals in the Senate plan would expire in 2026, while the corporate-tax cuts would be permanent.

Both the House and Senate bills would nearly double the standard deduction to around $12,000 for individuals and about $24,000 for married couples.