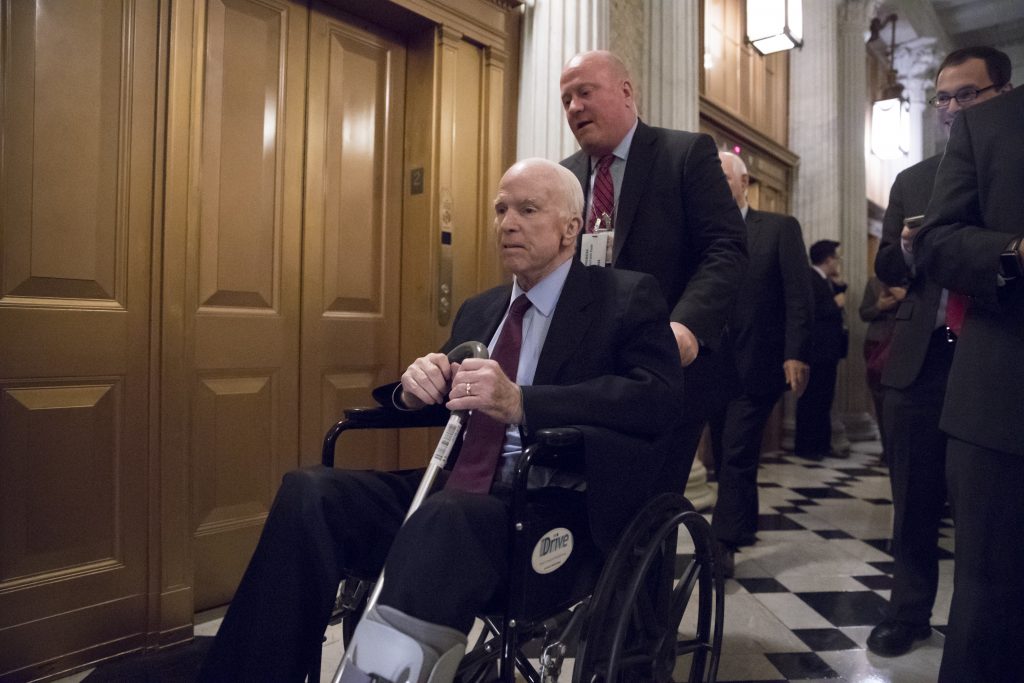 Senate Republicans on Thursday pushed ahead on a sweeping revamp of the nation’s tax code, with Majority Leader Mitch McConnell expressing confidence of final passage by week’s end and a key Republican getting on board.

The GOP had the momentum for delivering a major legislative and political win for President Donald Trump after the bill cleared a procedural hurdle on a 52-48 vote late Wednesday.

“We’re heading down the homestretch,” McConnell, R-Ky., told reporters on Thursday. McConnell said he expected a vote either late Thursday or early Friday.

Republican Sen. John McCain, who derailed the GOP effort to dismantle the Obama health-care law last summer, said Thursday he would back the tax bill, a major boost for the legislation.

“It’s clear this bill’s net effect on our economy would be positive,” McCain said in a statement. “This is not a perfect bill, but it is one that would deliver much-needed reform to our tax code, grow the economy, and help Americans keep more of their hard-earned money.”

Sen. Roy Blunt, R-Mo., said he believed that all the major issues were resolved, and that leaders were just working out the details.

Under Senate rules, senators can offer unlimited amendments, setting up the possibility of dozens of votes that could stretch all night into Friday morning.

The overall package is a blend of generous tax cuts for businesses and more modest tax cuts for families and individuals. It would mark the first time in 31 years that Congress has overhauled the tax code.

The package would lower the corporate income tax rate from 35 percent to 20 percent, and it would allow businesses owners to deduct up to 20 percent of their business income.

The plan would nearly double the standard deduction to around $12,000 for individuals and about $24,000 for married couples. The tax cuts for individuals would expire in 2026 while the corporate tax cuts would be permanent.

At least one Republican senator, Susan Collins of Maine, said she still wasn’t on board.

“I have a lot of concerns that I’m trying to fix,” Collins told reporters Thursday at a Christian Science Monitor breakfast.

Collins opposes the bill’s total elimination of the federal deduction for state and local taxes, and said it would be “very problematic for me” to vote for the bill.

The moderate Republican wants an exception to let homeowners deduct up to $10,000 in property taxes, similar to a provision in the House version of the tax bill. She would make up the estimated $146 billion in lost revenue by keeping the personal income tax rate for the wealthiest earners at 39.6 percent and making a smaller cut in the corporate tax rate.

Trump and other Republicans insist that the corporate tax rate must be reduced to 20 percent.