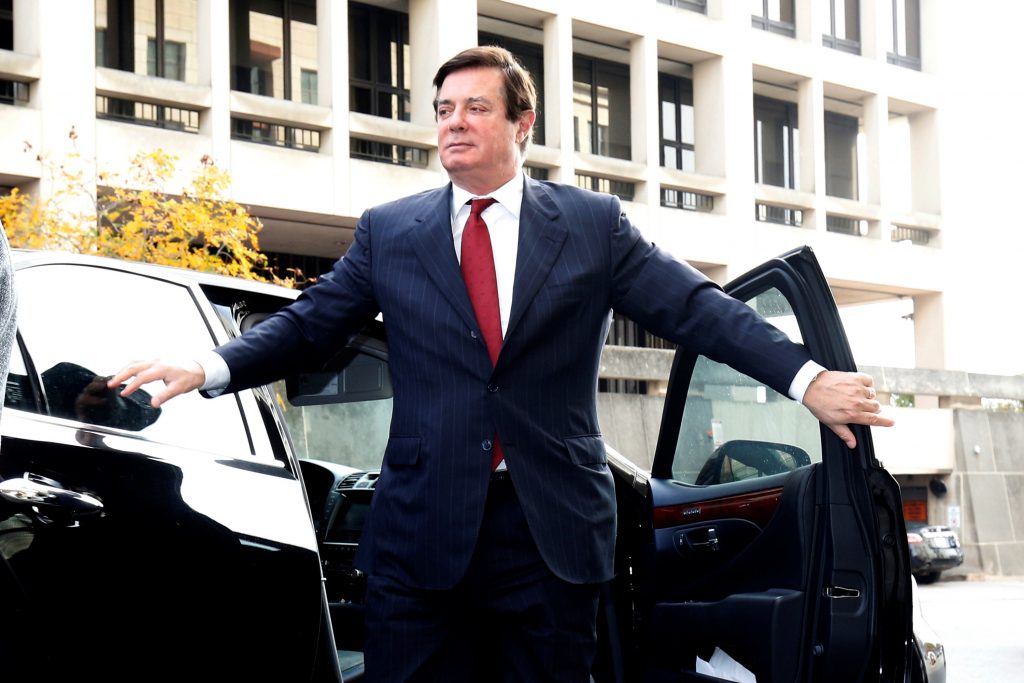 Former Trump campaign chair Paul Manafort has reached a bail deal with prosecutors led by Special Counsel Robert Mueller, agreeing to secure his release with four properties worth $11.6 million, forego foreign travel and limit his travel within the United States.

In a six-page court filing backed by more than 150 pages of financial documentation, Manafort’s lawyers agreed to forfeit the homes held by him, his wife, and with their daughter if he fails to appear in court to face criminal money laundering and fraud charges in connection with his work advising a Russia-friendly political party in Ukraine.

Manafort, 68, and his co-defendant, business partner Rick Gates, 45, have been under home confinement and GPS monitoring with few exceptions since pleading not guilty on Oct. 31 in the first criminal allegations in Mueller’s probe of possible Russian influence in U.S. political affairs, including Trump’s 2016 election.

The deal is subject to approval by U.S. District Judge Amy Berman Jackson of Washington, who ordered prosecutors Thursday afternoon to state their agreement with the proposed deal in writing. Gates has not yet announced whether he has reached agreement on bail with prosecutors or whether he would ask the judge for release without one.

“Counsel for Mr. Manafort and the Office of Special Counsel have conferred, and the parties agree that the conditions of release set forth below will reasonably assure the appearance of Mr. Manafort as required,” they wrote.

In the proposal, Manafort agreed he will not travel abroad and that his wife, Kathleen, will turn over her passports, as he has already done. His wife agreed to guarantee $10 million bond; and their daughter, Andrea, agreed to forfeit her share of one of the properties, a condominium in Manhattan’s Chinatown, worth a net $3.7 million.

The other properties listed included the couple’s house in the Hamptons of Long Island, New York, worth $4 million; a home in Palm Beach Gardens, Florida, worth $1.25 million; and his condo in Alexandria, Virginia, worth $2.7 million, all calculated after mortgages.

“Simply put, Mr. Manafort’s family would face severe economic consequences if he were not to appear as required,” his lawyers said, calling the sum “a substantial portion” of assets “accumulated over a lifetime of work.”

Prosecutors agreed with Manafort that his home detention and GPS monitoring be terminated and that he be permitted to travel on 24 hours notice between the three states where he has homes and does business and the District, and — with approval from the court — elsewhere in the United States.

The deal took weeks longer than the “48 hours” prosecutor Greg Andres predicted in a Nov. 6 hearing, and came after both sides sparred over the extent and disclosure of Manafort’s assets.

Prosecutors had said the scope of Manafort’s wealth was unknown to the government, apparently seeking to pry out more information through the bail process. They questioned his claimed $28 million of assets or net worth, stating he previously reported $136 million in assets in financial documents in May 2016.

Meanwhile, Manafort’s defense rebutted prosecutors’ assertions that he poses a risk of flight based on his ownership of three passports, and on the registration in May of a phone and email account under an alias that Manafort used to travel to Ecuador, China and Mexico.

While some reports painted the defendant as a “Jason Bourne” character, the facts “were much more mundane,” Manafort attorneys wrote. Manafort got additional passports to apply for visas when one was being used or believed to be lost, and traveled with a phone in his brother’s name to protect the confidentiality of his clients.

Jackson had said she was inclined to release both defendants from home arrest but preferred keeping them under electronic GPS tracking, saying at one point, “I think if they leave and don’t come back, we need to know where they went.”

The two defendants have been released from custody on unsecured promises by Manafort to pay $10 million and Gates $5 million if they failed to return.