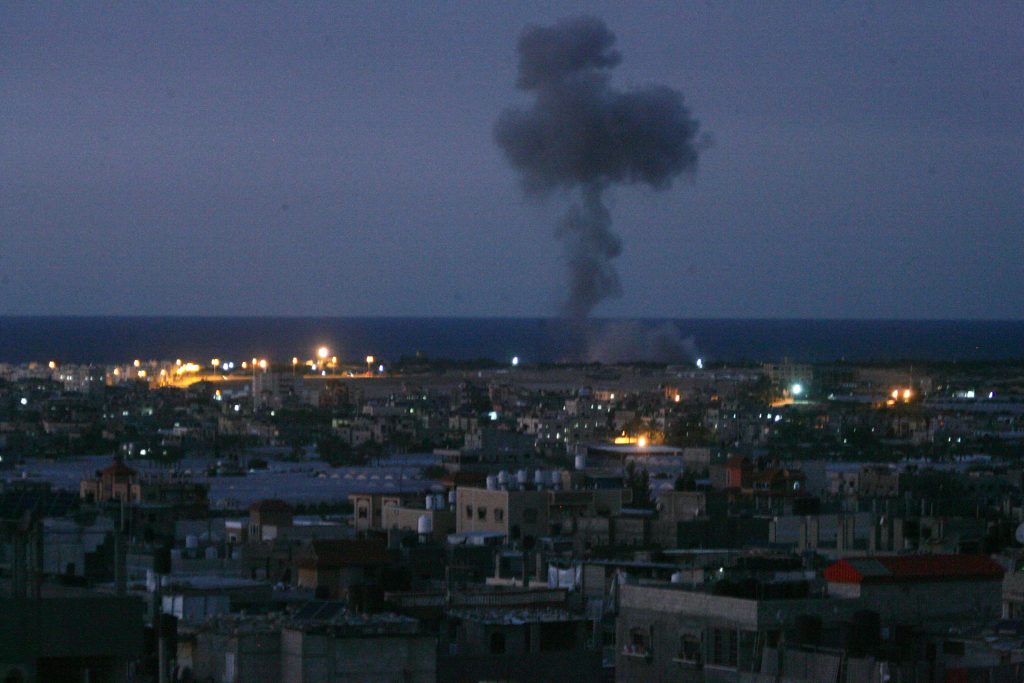 The Israeli Air Force launched a second round of strikes at targets in the Gaza Strip Thursday evening, in response to a mortar barrage from Palestinian terrorists earlier in the day.

The second round did not appear to have been prompted by any additional attacks from Gaza, but was part of the retaliation carried out during the afternoon. Before the second round of strikes, IDF spokesperson Lt. Col. Jonathan Conricus had said “it was too early to say” if the army would carry out additional attacks in Gaza, but that it would depend on “actions taken by the Hamas and Palestinian Islamic Jihad.” However, there were no reports of further Gaza fire.

Earlier Thursday afternoon, Red Alert warning sirens sounded in towns throughout the Gaza border fence area, as Gazan Arab terrorists fired mortar shells at Israel. Reports said that as many as 15 shells were fired at workers maintaining a part of the Gaza border fence.

IDF forces fired at Hamas installations near the border in response. No injuries or damage were reported on the Israeli side. Earlier, the IDF had said that the warning siren was a false alarm. The IDF said in a statement that it considers Hamas responsible for all attacks emanating from Gaza.

In response to the attack, Israel Railways said it was shutting down all service between Ashkelon and Sderot, areas that are in range of rockets and mortar shells fired by Gaza Arab terrorists. Buses will shuttle passengers on routes between the two cities. Delays were expected for commuters, and heavy traffic was likely, as many soldiers serving in southern Israel rely on the trains to go home for the weekend on Thursday nights.

Meanwhile, two IDF soldiers were lightly injured in a rock-throwing attack in Shomron. The incident occurred near Migdalim, not far from where a rampaging Arab gang earlier Thursday attacked a group of Israeli children, throwing rocks and stones at them and forcing them to take shelter in a cave.

One of the rioters was shot by an Israeli security guard, later dying of his wounds. The soldiers, who were riding in a vehicle when they were attacked, continued on to an IDF position, where they received treatment.