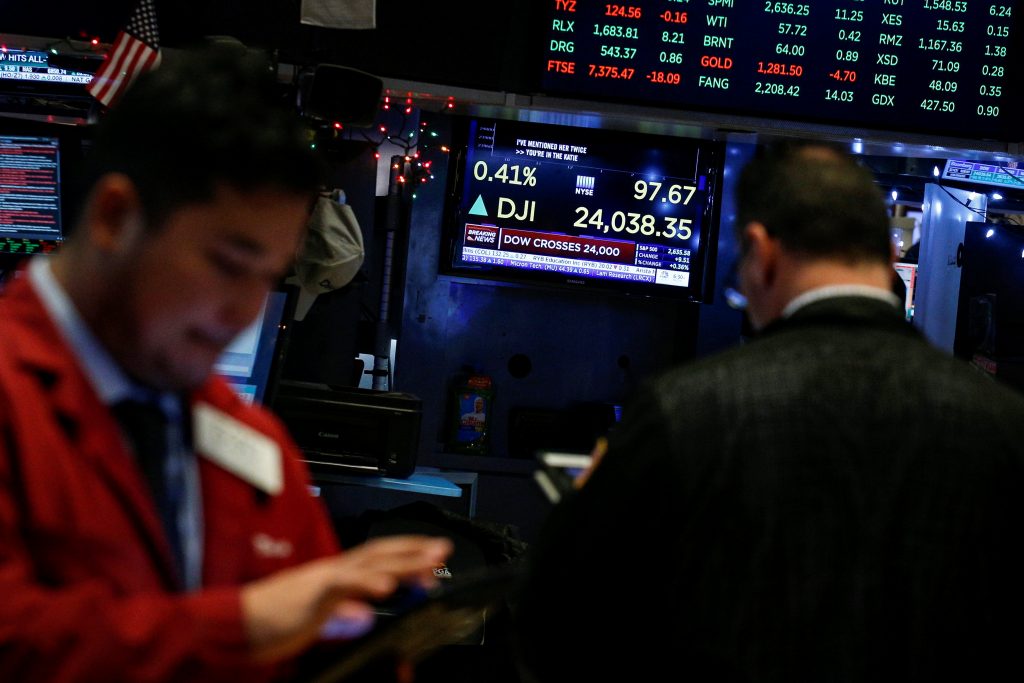 The blue-chip Dow Jones index raced past the 24,000 mark for the first time on Thursday, propelled by further gains for bank stocks and a recovery in technology shares.

The 30-member index has crossed four similar 1,000-point milestones this year on the back of strong corporate earnings, robust economic data and hopes that President Donald Trump’s tax plan would make headway.

Efforts to push the sweeping tax legislation through the Senate was hurtling on Thursday toward a dramatic conclusion, with Republican leaders pursuing behind-the-scenes deals intended to secure enough votes for passage.

“The signs continue to be good, the Republicans are actually moving the ball forward and I think the market is optimistic that it’s going to happen,” said Brad McMillan, chief investment officer for Commonwealth Financial in Waltham, Massachusetts.

“What happens in the market in the next couple of days or weeks is going to depend on whether the Republicans can get this done.”

The Nasdaq Composite was up 0.37 percent, at 6,849.75, a day after posting its biggest one-day drop in more than three months.

All the 11 major S&P indexes were higher, led by energy index’s 1.33 percent rise.

Brent crude prices gained more than 1.5 percent as an OPEC meeting progressed in Vienna where producers agreed to extend a supply-cut deal until end of 2018.

Kroger was the biggest S&P gainer, surging about 12 percent after the biggest U.S. supermarket chain beat both sales and profit estimates.

Juniper Networks shares fell about 5 percent after Nokia denied takeover talks. Juniper’s shares had shot up 22 percent after CNBC reported that Nokia had offered to buy the network gear maker for about $16 billion.