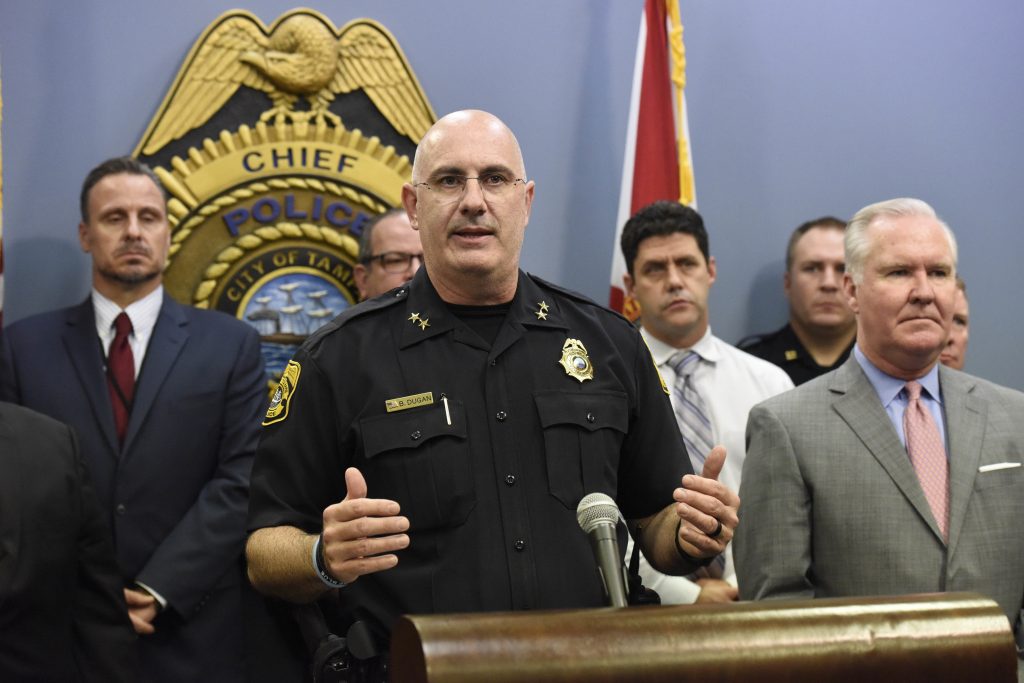 A recent college graduate who is charged in four slayings that terrorized a Tampa neighborhood over the past 51 days used the same gun in all of the shootings and targeted people near bus stops with “no apparent motive,” a police chief said Wednesday.

The crack in the case came Tuesday when Howell Emanuel Donaldson, 24, brought a bag with a loaded handgun to his job at a McDonald’s and asked a co-worker to hold it while he went across the street, authorities said. Restaurant workers thought that was odd and when Donaldson left, they reported the gun to a police officer who was doing paperwork there, setting off an investigation that linked Donaldson to the shootings. Aside from matching shell casings at the shootings, authorities said location data from Donaldson’s cellphone put him at the scene of at least three of the killings.

“The gun is what we needed,” Police Chief Brian Dugan said at a news conference surrounded by family members of the victims.

The arrest overnight brought relief to an anxious community worried about a serial killer. Police had earlier released black-and-white surveillance video showing a man in a hoodie as a possible suspect, and by Halloween the fear was so great that police escorted children while trick-or-treating.

“We had a community that was on edge,” Mayor Bob Buckhorn said. “Today the light shines. The darkness is over. This community begins the healing process.”

Donaldson told investigators he was unfamiliar with the Seminole Heights neighborhood where the shootings occurred. He then asked for an attorney, but arrest records don’t list one and the police chief said he didn’t know if he had a lawyer yet. He’s scheduled for a first appearance hearing on Thursday.

Donaldson graduated from St. Johns University in New York in January 2017, according to school spokesman Brian Browne. He was a walk-on for the men’s basketball team during the 2011-12 season, but never played in a game, Browne said.

Police in New York said Donaldson had been arrested in May 2014, but the arrest was sealed and no details were available.

He was working as a crew chief at the McDonald’s. After graduating, he began working in customer support at the Ultimate Medical Academy, a school that trains workers for health-care jobs. He started there on Feb. 13 and worked for about three months before he was fired for absenteeism. The academy said he passed a background check before he was hired.

The tip that led police to Donaldson came from one of his co-workers at an Ybor City McDonalds, which is near the Seminole Heights neighborhood.

Donaldson asked an employee at the restaurant to hold a bag with a .40-caliber gun while he went to a nearby business to get a payday loan, according to an arrest report.

The employee told her manager about the gun and the manager alerted a Tampa police officer at a table in the restaurant.

When Donaldson returned to the McDonald’s, police were waiting.

“The person who called us, I cannot thank them enough for standing up and doing the right thing,” the chief said.

Donaldson bought the gun from Shooter’s World in Tampa on Oct. 3 along with a 20-round box of bullets. The first killing happened six days later.

Detective Austin Hill wrote in a police report that Donaldson told investigators “no one, except for himself, had control of the Glock firearm since his purchase.”

Authorities said a search of Donaldson’s cellphone found location data that indicated three days of recorded times and activities corresponding with the first three shootings on Oct. 9, Oct. 11 and Oct. 19.

The arrest report said police found clothing inside Donaldson’s car that was similar to what was worn by a person spotted in surveillance video taken the night of the first shooting.

The police chief said authorities have not been able to determine why Donaldson chose the Seminole Heights neighborhood.

Residents and police had been on edge since Oct. 9, when 22-year-old Benjamin Mitchell was shot to death.

All of the October victims were either getting on or off a city bus, or were at a bus stop when they were shot, police said.

Dugan said the department had received more than 5,000 tips. He thanked those who called in the tip that led to Donaldson’s arrest.