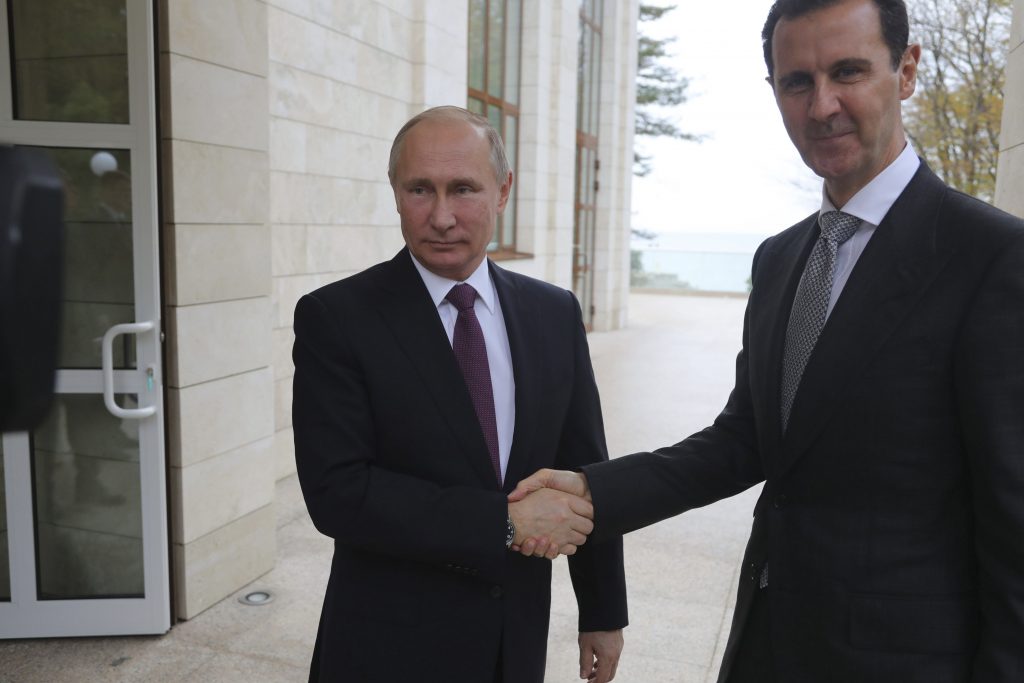 A breakthrough in U.N.-backed Syria peace talks in Geneva this week seems hardly more likely than in seven earlier rounds as President Bashar al-Assad pushes for total military victory and his opponents stick by their demand he leave power.

A Syrian newspaper reported on Monday that the government delegation would delay its planned Tuesday arrival in Geneva because of the opposition’s insistence that Assad step down.

The stance is seen by Damascus and its allies as divorced from reality after their steady march of victories since Russia entered the war in 2015. The rebels have been forced from all Syria’s big cities and their hopes of toppling Assad by military means look finished.

The opposition has also accused the government of refusing to seriously engage.

“The Assad regime must not be allowed to play for time while people are being besieged and bombed,” Yahya al-Aridi, newly appointed head of the opposition’s negotiating committee, said on Sunday.

Aridi was chosen last week after the opposition rejigged its negotiations committee – jettisoning as its head a more hard-line opponent of Assad in what some speculated might be a move towards softening its position. But the statement it put out after meeting on Friday reiterated its demand that Assad go before the start of a political transition under any peace deal.

Last week a senior Assad adviser said talks could succeed only if rebels laid down their arms. Over the weekend, airstrikes on the rebel-held Eastern Ghouta district near Damascus intensified, killing 34 people on Sunday and Monday, according to a war monitor.

“You cannot expect very much,” said Nikolaos Van Dam, a former Dutch diplomat in Damascus and author of two books about Syria.

“The regime doesn’t want to really negotiate. They want to reconquer every inch of Syrian territory and then negotiate. But then the opposition would have no bargaining chips,” he said.

The Syrian civil war, now in its seventh year, has killed hundreds of thousands of people and caused the world’s worst refugee crisis, driving 11 million from their homes. All previous diplomatic initiatives have swiftly collapsed over the opposition demand that Assad leave power and his refusal to go.

Troops from Russia, Iran, Turkey and the United States, as well as Shiite militias from Lebanon, Iraq and Afghanistan, have all been brought to Syria.

Russia has pushed its own parallel track of diplomacy since early this year, bringing together Assad’s other main ally, Iran, and Turkey, which has been one of the biggest rebel supporters.

Russia has elections next year and President Vladimir Putin wants to show progress towards a political deal after two years of fighting far from Russian soil. Moscow has already said it will bring many troops home from Syria by the end of the year.

Putin may also seek to tout diplomatic progress as he angles for the West to take some of the burden of Syria’s post-war reconstruction, now likely to fall on Russia, Iran and China.

Western foreign ministers said in September their support hinges on a “credible political process leading to a genuine political transition,” a process they have said requires the involvement of the opposition.

“Russia wants the end of the war but it wants its ally intact. So what would be the compromise that is acceptable to the opposition or to the other countries? It’s not clear to me,” said Van Dam.

Moscow now plans a “Syrian Congress,” bringing together the government and some opposition groups to write a new constitution leading to elections. The main opposition rejects the idea, saying all talks must come under the United Nations.

But the government has said it backs the congress, as has Turkey, which has some sway over rebel groups in the northwest.

“There is an acceleration in the political solution on the basis of a unified Syria headed by Bashar al-Assad, with amendments to the constitution and in the election law,” a senior, pro-Assad official in the region said.

The Syrian government declared on Sunday it would support the formation of a committee that will discuss the constitution and is expected to be set up at the congress. It also said it would support U.N. participation in legislative elections to be held after that discussion.

This week’s Geneva talks will focus on the issues of elections and a constitution, Ramzi Ramzi, the deputy United Nations special envoy for Syria, said in Damascus on Saturday.

After recapturing the last major rebel urban stronghold in East Aleppo a year ago, and advancing across central and eastern Syria against Islamic State this year, the government now controls far more territory than any other force in the country.

But rebels still hold a swathe of northwest Syria, next to Turkey, and an enclave in the southwest near Israel and Jordan. They have other pockets near Damascus and Homs.

Kurdish groups and allied Arab militia backed by the United States also hold the northeast and are holding elections there this week for local councils in an effort to cement autonomy.

They have not been invited to the Geneva talks and are regarded by Syria’s neighbor Turkey as enemies.

Assad has sworn to recover all of his state, and visiting Iranian officials have indicated that new military campaigns may soon start against both the rebels and the Kurds.