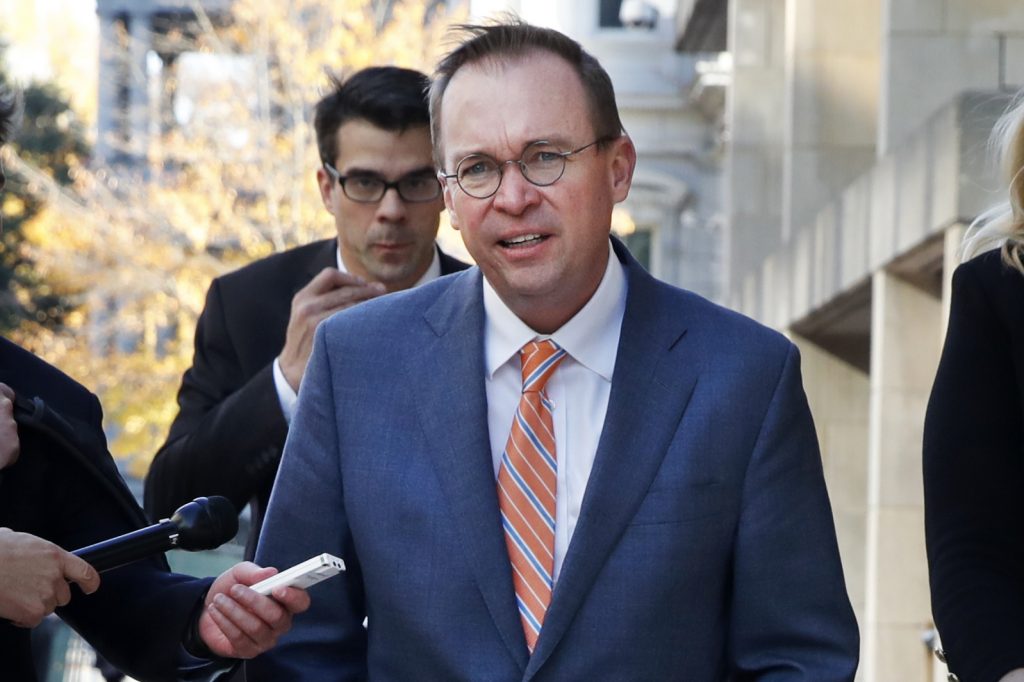 Leandra English, who was elevated to interim director of the bureau late last week by its outgoing director, sent staff an email offering Thanksgiving wishes. President Donald Trump’s choice for the role — White House budget director Mick Mulvaney — then emailed staff to tell them to “disregard” any instructions from English.

Laying down markers in what has quickly become a war of optics, both signed their missives “Acting Director.”

English has filed a lawsuit seeking a temporary restraining order to block Mulvaney from taking over the bureau. Judge Timothy Kelly, a Trump appointee approved recently by the Senate, is expected to hear arguments on the case.

Mulvaney, speaking to reporters at the bureau, announced he was imposing a 30-day freeze on hiring and new rulemaking. Despite previous comments calling the agency a “joke” and an example of bureaucracy run amok, he said the bureau would remain functioning.

“This agency will stay open. Rumors that I’m going to set the place on fire, or blow it up or lock the doors are completely false,” he said. Mulvaney said the day went smoothly, though he noted the power struggle may be awkward for people who know English. Responding to news reports about the conflicting leadership, he said, “There was one person today who showed up at work claiming to be director. She wasn’t here.”

White House press secretary Sarah Huckabee Sanders said at Monday’s briefing that Mulvaney has “taken charge” of the bureau and has the “full cooperation” of the staff.

At the center of the controversy are two laws: the Dodd-Frank Act, the law passed after the financial crisis that created the bureau, and the Federal Vacancies Reform Act, which gives the president authority to appoint temporary department heads while their permanent nominees are approved by the Senate.

The Office of Legal Counsel, which acts as a legal adviser to the president, also argued that Mulvaney, not English, was the legitimate director of the department.

One straightforward solution to the issue of who runs the CFPB is for Trump to nominate his own permanent director. But it may take several weeks for someone to be nominated and even months until the Senate were to confirm his or her appointment.