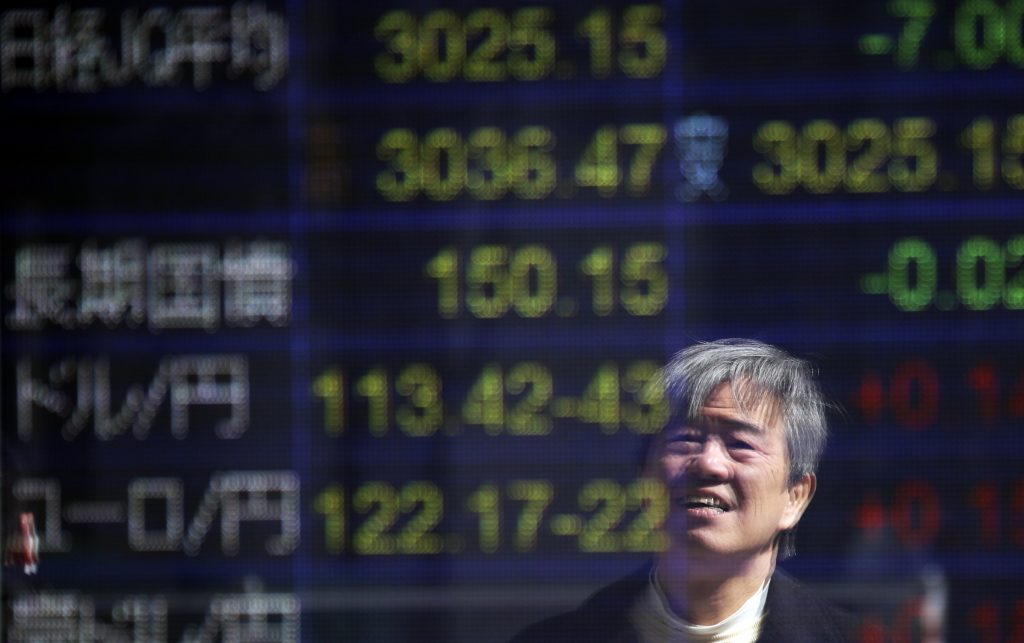 Asian stocks surrendered early modest gains and retreated from a decade high on Monday, weighed by weakness in the Chinese and South Korean markets, while the euro reached a two-month top against the dollar.

MSCI’s broadest index of Asia-Pacific shares outside Japan rose early in the session on Friday’s Wall Street gains, but was last down 0.9 percent.

The index rose to its highest since 2007 on Thursday as equity markets have enjoyed strong support this year thanks to corporate earnings rising on the back of an improving global economy.

Shanghai shares were down 0.9 percent, reaching a three-month low.

Chinese shares were already on a shaky footing after last week, hurt by a rout in the domestic bond market and fresh moves to reduce risks in the asset management industry that may bring a sea change for banks.

Strength in tech shares pushed the S&P 500 and Nasdaq to record highs on Friday but observers noted that demand for tech-related products such as semiconductors could eventually slacken.

“Global sales of semiconductors expanded greatly in the third quarter. But demand could slow in the fourth quarter as a reaction to this sharp increase, and there are warning signs such as reversals in price trends,” wrote Yoshimasa Maruyama, chief market economist at SMBC Nikko Securities in Tokyo.

The common currency rode on momentum from Friday after data showed German business confidence hit a record high in November, a sign the European Union’s largest economy is on track for a boom.

The euro was also helped by Germany’s Social Democrats’ agreement on Friday to hold talks with Chancellor Angela Merkel on renewing their outgoing coalition government.

The euro’s strength kept the dollar’s index against six major rivals at 92.805, not far from a two-month low of 92.675 plumbed on Friday.

The Australian dollar dipped 0.2 percent to $0.7605 after rising nearly 0.75 percent the previous week.

The New Zealand dollar rose 0.2 percent to $0.6861, recovering some of Friday’s losses.

U.S. crude oil futures rose to a 2-1/2-year high of $59.05 per barrel on Friday. A continued shutdown of a U.S.-Canada pipeline triggered supply concerns, while the prospect of OPEC extending production cuts when the group meets this week also boded well for oil.

Copper on London Metal Exchange hit a one-month high of $7,024 a ton amid signs of resilience in China’s industrial sector that suggested a slowly cooling, but still healthy, appetite for metals.

Despite the modest slowdown, October’s growth rate was still the second-highest for a single month this year.