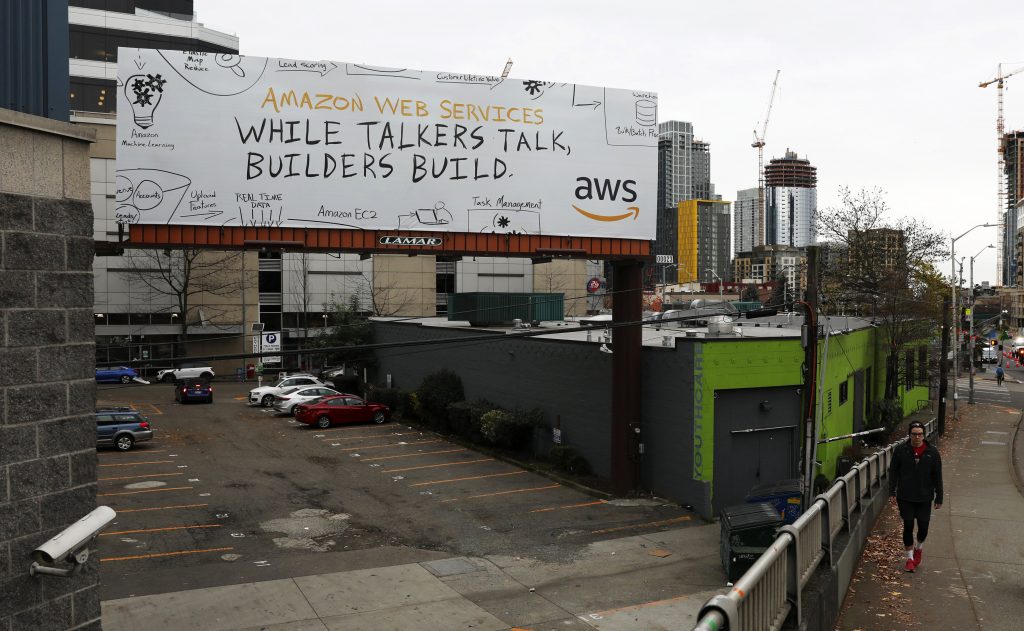 In the past few months, the cloud-computing unit of the online retail giant has taken a page from the playbook of some of its more traditional competitors: It started advertising.

Ads have been splashed across billboards and in airport terminals, media spots and web videos, featuring a whiteboard full of sketches of software architecture and appeals to invent something using Amazon’s collection of rented computing services.

The advertising campaign represents a milestone in AWS’s march from technology upstart to one of the major players in business software, technologists and marketers say.

For many years, AWS didn’t advertise, partly because it didn’t have to. The service held a wide lead over the competition, and word-of-mouth was enough to catapult the company’s tools atop the growing market for web-based business software.

But the once-scrappy AWS now needs to focus on winning over CEOs and corporate boards to continue to grow, company insiders and observers say. Amazon also faces intense competition from well-funded rivals, many of which are already spending heavily to attract those potential customers.

Amazon “is out to get the enterprise,” said Dave Bartoletti, an analyst with Forrester Research who tracks cloud computing. “They’re trying to get to the next level, which is, ‘How do you reach executives at big companies?’”

AWS became a cloud-computing giant without an ad campaign, an approach that mirrored the heads-down, build-it-and-they-will-come philosophy that transformed Amazon’s online bookstore into a gigantic marketplace for merchandise of all kinds.

Amazon.com founder Jeff Bezos pushed the company to build its brand by relying on good service rather than running flashy publicity campaigns. “If you do build a great experience, customers tell each other about that,” he told Businessweek magazine in 2004. “Word of mouth is very powerful.”

Many of the first users were software developers and other technologists who, armed with credit cards, could tap into the computing power stored in Amazon’s server farms. The word spread around the tight-knit software community, making customers out of digital natives like Airbnb, Netflix and Pinterest.

But in recent years, the kind of cloud-computing services AWS sells has gone mainstream. Big, established companies like banks and retailers are running more of their technology on AWS — threatening the traditional businesses of companies like Microsoft, IBM and Oracle.

Amazon’s rivals fought back on two fronts: They followed AWS into the cloud, selling similar services to their own customers. And they launched advertising campaigns aimed at slowing AWS’s momentum.

Shortly after Amazon elbowed out IBM to win a high-profile contract to provide data-center services to the Central Intelligence Agency, IBM plastered buses in Las Vegas with ads for its services as visitors gathered for Amazon’s 2013 “re: Invent” conference.

Meanwhile, Microsoft has made its cloud-computing services a focus of its $1.5 billion advertising budget. After a couple of years spent testing the water with limited advertising experiments, AWS decided to strike back this year with its first major brand campaign, which began in September.