Politics Bannon Has House Republicans Looking Over Shoulders for 2018
Politics 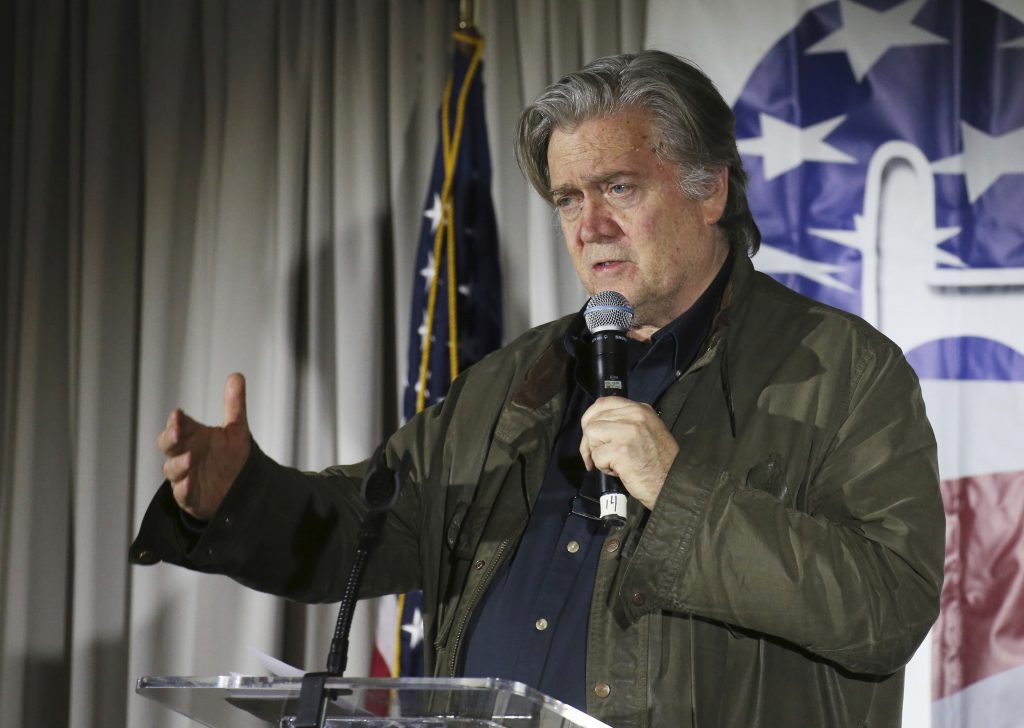 Steve Bannon is telling people he’s not coming after mainstream Republicans in the House the way he’s targeting senators with anti-establishment disrupters in primaries. Many in the House are looking over their shoulders all the same.

“I can’t read Mr. Bannon’s mind,” said North Carolina Rep. Robert Pittenger, who could well be on the list.

The House is a different story, so far.

The 435-representative chamber is far larger than the 100-member Senate, so it would take huge sums for Bannon to reshape. It’s also where Speaker Paul Ryan, R-Wis., has steered bills erasing much of the Obama health law and cutting taxes. Conservatives such as Bannon may be able to tilt the House rightward simply by running primary candidates in open seats, rather than battling normally well-funded Republican incumbents.

When Bannon met this month with Rep. Steve Stivers, R-Ohio, who heads the House GOP’s campaign organization, he told Stivers their goals are aligned.

They’re “largely on the same page to defend and expand” the party’s majority, though there “might be a race here or there” where they clash, said Andrew Surabian, a Bannon associate and adviser to the Great America Alliance, a pro-Trump political organization.

“Steve’s focus is not on incumbents in the House,” Surabian said. “If you’re not going out of your way to be a thorn in the side of the president, you probably don’t have much to worry about.”

Surabian said Bannon will headline a fundraiser next month for Rep. Lee Zeldin, R-N.Y. But some GOP incumbents aren’t certain Bannon will leave them alone, and potential challengers are feeling buoyed.

“There are qualities about my candidacy he certainly would like,” Mark Harris, a former pastor set for a rematch with Pittenger in a district east of Charlotte, said of Bannon. “We’ve got to start draining the swamp.”

In New York, GOP Rep. Dan Donovan got a shot across the bow: a “Game on!” tweet by Michael Grimm, his challenger in next year’s primary, that included a photo of a smiling Grimm with Bannon. Grimm held Donovan’s Staten Island seat before serving seven months in prison for tax evasion.

“We want one unified Republican Party,” said Sarah Chamberlain, president of the Republican Main Street Partnership, which supports more than 70 GOP moderates. “If the fight comes, we’ll be prepared.”

The Senate has 33 seats at stake next November, including eight held by Republicans. It’s also the realm of McConnell.

Bannon’s ability to influence the House is more questionable. It would take tens of millions of dollars to sway the several dozen competitive races expected next year.

Beyond the House’s sheer size, many moderate Republicans who might be tempting Bannon targets represent suburbs where hard-right conservatives could well lose the general election. That could increase the risk of Republicans forfeiting House control — bad news for Trump’s agenda and his prospects of avoiding congressional investigations.

“You lose control of the House and you have a misery index,” former Rep. Tom Reynolds, a New York Republican who headed House GOP campaign operations, said of the consequences to Trump should Democrats take over.

Bannon would likeliest engage in open House seats in GOP strongholds in Texas, Pennsylvania and elsewhere, or the dozen Democratic-held districts, mostly in the Midwest and Northeast, that Trump carried last year. Surabian said the idea is to elect “more allies to Mark Meadows,” the North Carolina Republican who leads the hard-right House Freedom Caucus that has battled party leaders.

Bannon supporters say his backing brings activist conservatives and fundraising. Mainstream Republicans say his potency is overrated, noting that conservative groups such as the Club for Growth have targeted Republican centrists with limited success.

“There isn’t any evidence to this point that outside of his news organization, Mr. Bannon has the resources for campaigns of this magnitude,” said Brian J. Walsh, a GOP strategist.

Democrats decisively won governors’ races in Virginia and New Jersey this month and gained local posts nationwide. They would capture House control by gaining 24 seats in next year’s midterm elections, which are historically tough for the party holding the White House.

As for incumbents Pittenger and Donovan, each stresses his loyalty to Trump.

Pittenger says he’s backed Trump on nearly all House votes. While Harris has pledged fidelity to conservative groups, Pittenger says, “I pledge allegiance to my constituents.”

Trump “understands the differences between New York and the rest of the country,” Donovan says.