Age May Not Be Why You’re Sleeping Badly 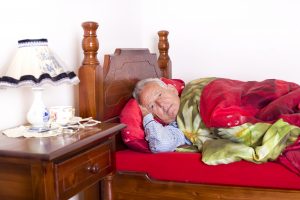 Many older adults have sleep problems that can be caused by aging. But other problems also contribute to the prevalence of sleep complaints, and they should be discussed and investigated, experts say.

A national poll conducted by the University of Michigan and released in October found that almost half of those 65 and older have trouble getting to sleep, and more than a third are taking prescription or over-the-counter sleep aids.

Older adults also have problems staying asleep, said Adam Spira, a sleep researcher at the Johns Hopkins Bloomberg School of Public Health. “Good sleep protects against negative outcomes, and those who sleep poorly are at higher risk of functional decline and depression,” he added.

The American College of Physicians (ACP) defines chronic insomnia as the presence of symptoms of distress and impairment that last for at least three nights a week for at least three months and are not linked to medical or mental problems or other sleep disorders, such as obstructive sleep apnea and restless legs syndrome.

The National Sleep Foundation says older adults need about the same amount of sleep as other adults – seven to eight hours a night.

Changes in sleep occur throughout a person’s life, Spira said. In later years, there are decreases in total sleep time, increases in sleep fragmentation and decreases in deep sleep, he said.

Many people experience a circadian rhythm shift as they age, such that they awaken earlier in the morning and do not feel they are able to get enough sleep, said David N. Neubauer, a clinical faculty member in the Johns Hopkins Sleep Disorders Center.

Later in life, there also tend to be other factors that undermine good sleep quality, Neubauer said.

Older adults may have suffered personal losses or have worries about the future, he said.

As a group, older adults also have more health problems, which, along with the medications they take, can be major drivers of sleep problems, Spira said.

However, both older adults who are healthy and those with chronic medical conditions should use caution in taking over-the-counter and prescription sleeping aids, experts said.

Studies show that older people who take sleeping pills, also called sedative-hypnotics and tranquilizers, sleep only a little longer and a little better than those who don’t take them, according to Choosing Wisely, an initiative of the American Board of Internal Medicine.

Seniors are likely to be more sensitive than others to sedative-hypnotic drugs, which may remain in their bodies longer than in younger people’s systems. These drugs are also known to cause confusion and memory problems that can increase the risk for auto accidents, falls and hip fractures.

The ACP recommends that medications, when used, be taken for only a short time (four to five weeks). The Food and Drug Administration advises that if insomnia doesn’t go away within seven to 10 days of treatment with drugs, a patient should see a doctor for reevaluation.

Neubauer said prescription medications and over-the-counter drugs should be used only after any possible underlying problems are assessed. Evaluations should include exploring behavior or schedule changes that might be conducive to sleep and making sure that a patient’s use of sleep aids wouldn’t pose serious risks for health problems or negative interactions with other medications. Over-the-counter sleep medications, Neubauer said, are metabolized more slowly and tend to stay in an individual’s system longer than prescription drugs.

Dietary supplements that are used as sleep aids and contain plant products, vitamins and minerals – for instance, valerian – appear to be generally safe, although there is little evidence that they work, Neubauer said. Another common compound used in dietary supplements, melatonin – a naturally occurring hormone that is typically released in the evening and remains elevated until morning – does little to help people fall asleep quicker when taken at bedtime and is more likely to help people when taken a few hours before, studies suggest, Neubauer said.

Behavioral changes can also be effective in tackling sleep issues. In 2016, the ACP recommended for the first time that cognitive behavioral therapy for insomnia (CBT-I) be the first-line treatment for adults with chronic insomnia. The ACP’s president stated that although there is not enough evidence to directly compare CBT-I and drug treatment, CBT-I is likely to be less harmful, while sleep medications can be associated with serious adverse effects.

CBT-I is a combination of treatments including cognitive therapy, behavioral interventions such as sleep restriction and stimulus control, and helping develop habits conducive to a good night’s sleep.

Luis Buenaver, director of the Sleep Medicine Program at Johns Hopkins School of Medicine Department of Psychiatry and Behavioral Science, recommended that a bed be used only for sleep. People should not go to sleep if they are not tired, and people should try to wake up every day at the same time to train their circadian clock, Buenaver said.

The morning wake-up time is a critical period when the circadian system is sensitive to being reset, Neubauer said. “Getting up at about the same time each morning stabilizes our internal rhythm and makes it more likely that we will be able to fall asleep eight hours earlier” than that time, he said.

Because sleep difficulties can result from a multitude of problems, including physical and mental disorders, Neubauer said it’s always good to check with a health professional when sleep problems persist.

“We need to emphasize that doctors and patients should begin to think of sleep as a major indicator of health, and doctors should recommend treatment and sleep clinics to patients who are having problems,” said Michael Smith, a professor of psychology and behavioral science at the Johns Hopkins School of Medicine.