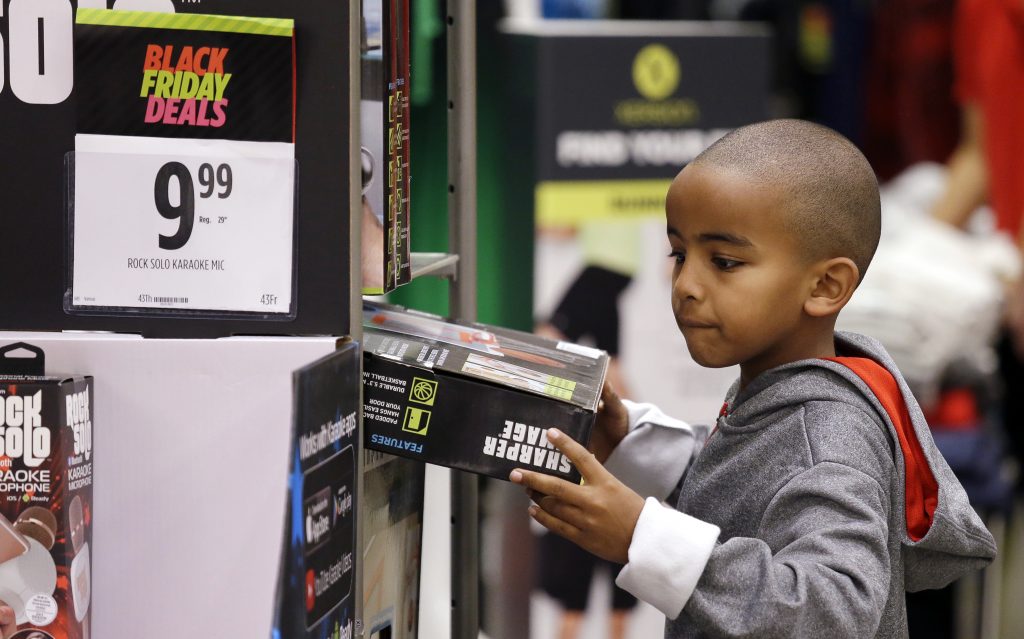 Retailers worked hard to attract shoppers to stores on Black Friday, offering in-person deals meant to counter the ease of shopping by phone on Amazon.

A better economy and colder weather helped, to be sure. But stores have also tried to improve the store experience and offer better service. They’ve also made a big push toward offering store pickup for online orders, hoping to get people to pick up more items. But they’re fighting a circumstance in which online leader Amazon is the first and only stop for many shoppers.

So they’re getting creative with the deals.

Victor Moore said he arrived about two hours ahead of Best Buy’s 8 a.m. opening in Nashville and scored one of the about 14 “doorbuster” deals. Moore said he’s done some online shopping, but the allure of in-store-only deals drew him out from behind the computer.

“This is the first successful doorbuster that I’ve ever been a part of,” Moore said. “I’ve been in lines before, but never actually got the items that I was waiting for.”

Annette Peluffo usually avoids Black Friday and buys online. But a $250 gift card reward for buying an iPhone 8 plus at a Target store in Miami was hard to resist. She plans to use the money to buy toys for her nephews and nieces in the coming weeks. “I just came here for the iPhone. I am not going to any other store,” she said.

Still, Black Friday isn’t what it used to be. It has morphed from a single day when people got up early to score doorbusters into a whole month of deals. That has thinned out the crowds. And brick-and-mortar stores face plenty of challenges.

With the jobless rate at a 17-year-low of 4.1 percent and consumer confidence stronger than a year ago, analysts project healthy sales increases for November and December. The National Retail Federation trade group expects sales for that period to at least match last year’s rise of 3.6 percent and estimates online spending and other non-store sales will rise 11 to 15 percent.

But analysts at Bain say Amazon is expected to take half of the shopping season’s sales growth.

About 69 percent of Americans, or 164 million people, intend to shop at some point during the five-day period from Thanksgiving to Cyber Monday, according to a survey released by the NRF. It expected Black Friday to remain the busiest day, with about 115 million people planning to shop then.

“The consumer still likes to go to the stores,” said Charles O’Shea, Moody’s lead retail analyst. “I’ve seen a lot of traffic. Yes. There’s going to be a lot of online shopping. But I think the brick and mortar stores have done a nice job so far in attracting shoppers.”

That’s true of Karre Wagner, a 20-year-old University of Minnesota student from St. Paul, Minnesota, who was shopping at Mall of America in Bloomington, Minnesota, with her friend. She bought a Blue-Ray player at the mall’s Best Buy store. She says she started shopping on Black Friday, but she likes to go to the mall to shop.

“I like to see what I’m buying. I like to touch it, feel it, know exactly what I’m getting and part of it is the experience,” she said. “I mean, sitting online is fine, but there’s just something about starting the [shopping] season with Black Friday.”

The shift to online buying is a major factor as industry analysts watch how the nation’s malls fare this shopping season. The Mall of America in Minnesota says that 2,500 people were in line at the 5 a.m. opening Friday, in line with a year ago. Shoppers started queuing up as early as 5:45 p.m. on Thanksgiving. Jill Renslow, Mall of America’s executive vice president of business development, said stores like Nordstrom, Macy’s and Best Buy were crowded. She said the items that caught shoppers’ attention included were voice-activated devices like Amazon Echo, nostalgic toys, clothing and shoes.

Macy’s CEO Jeff Gennette said customer counts are higher and business was better in the North and Northeast even with fewer promotions from a year ago.

But much depends on whether people are buying or just looking, and if they’re buying things that aren’t on sale as well.

Chuck Boyd said he and his son arrived at 4 a.m. as one of the first five or six in line at Best Buy in Nashville to get one each of about 14 “doorbuster” deals. Boyd said he never goes out for Black Friday deals and prefers online shopping.

“I’d much rather do online,” Boyd said. “But this was the deal you could only do in the store.”