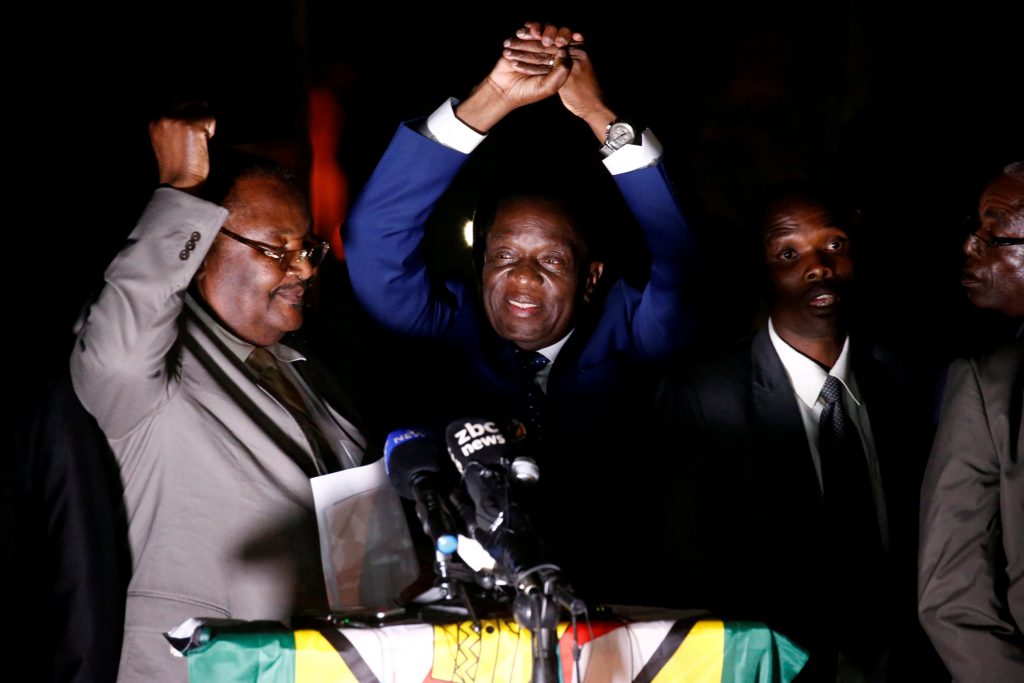 Zimbabwe’s former president Robert Mugabe was granted immunity from prosecution and assured that his safety would be protected in his home country as part of a deal that led to his resignation, sources close to the negotiations said on Thursday.

Mugabe ruled Zimbabwe for close to four decades but stepped down on Tuesday after the army seized power and the ruling party turned against him. Emmerson Mnangagwa, the former vice president, is set to be sworn in as president on Friday.

The 93-year-old Mugabe, who resigned as lawmakers began impeaching him, has not been seen outside asides for a few photographs, since his stunning speech to the nation on Sunday night in which he defied calls to step down.

A photo circulating on social media, said to be taken this week, showed Mugabe and his wife sitting on a sofa with a trio of advisers standing behind them. A dejected-looking Grace Mugabe, who earlier this month was likely to replace Mnangagwa after his firing as vice president, looks off camera while Robert Mugabe’s eyes are closed. The photo could not immediately be verified.

Mnangagwa is set to be sworn in Friday after making a triumphant return to the country. He had fled shortly after his firing, claiming threats to his life.

He greeted a cheering crowd Wednesday night outside ruling party headquarters and promised “a new, unfolding democracy.” He also reached out to the world, saying international help is needed to rebuild the shattered economy.

Mnangagwa, who fled Zimbabwe upon being fired as vice president on Nov. 6, returned a day after Mugabe resigned. Mugabe’s departure followed a week of intense pressure — from the military that staged a government takeover, from members of parliament who started impeachment proceedings and from citizens who protested by the tens of thousands in the streets.

While Mnangagwa spoke about “working together,” he also recited slogans from the ruling ZANU-PF party that are unlikely to attract Zimbabweans in the opposition.

Mnangagwa, a former justice and defense minister with close ties to the military, served for decades as Mugabe’s enforcer, a role that earned him the nickname “Crocodile.” Many opposition supporters believe he was instrumental in the army killings of thousands of people when Mugabe moved against a political rival in the 1980s.

Mnangagwa was in hiding during the political drama that led to Mugabe’s resignation. His presence Wednesday, flanked by heavy security, delighted supporters who hope he can guide Zimbabwe out of political and economic turmoil that has exacted a heavy toll on the southern African nation of 16 million.

After meeting with South Africa’s president, Mnangagwa flew home in a private jet. He said his inauguration on Friday is “when we finish this job to legally install a new president.”

Mnangagwa will serve Mugabe’s remaining term until elections at some point next year after the ruling party’s Central Committee voted to remove Mugabe from his party leadership post. Opposition lawmakers who have alleged vote-rigging in the past say balloting must be free and fair, a call the United States has echoed.

Mugabe’s firing of his longtime deputy as the first lady positioned herself to succeed her husband led the military to step in, sending tanks into the streets and putting the president under house arrest. That opened the door for the party and the people to turn against the man who took power after the end of white minority rule in 1980.

Mugabe’s resignation has been met with wild celebrations by people thrilled to be rid of a leader whose early promise was overtaken by economic collapse, government dysfunction and human rights violations.

On Thursday, an editorial in the privately run NewsDay newspaper said Mnangagwa has “an unenviable task” and that he should set up a coalition government that represents all Zimbabweans.

“Arguments by some sections of society are that indeed Mnangagwa was part of the failed Zanu PF regime until two weeks ago, and may not have been the right person for the job, given the political and economic errors of the past,” the editorial said. “The new president will come under significant pressure to perform miracles to prove his critics wrong and revive the sinking economy.”