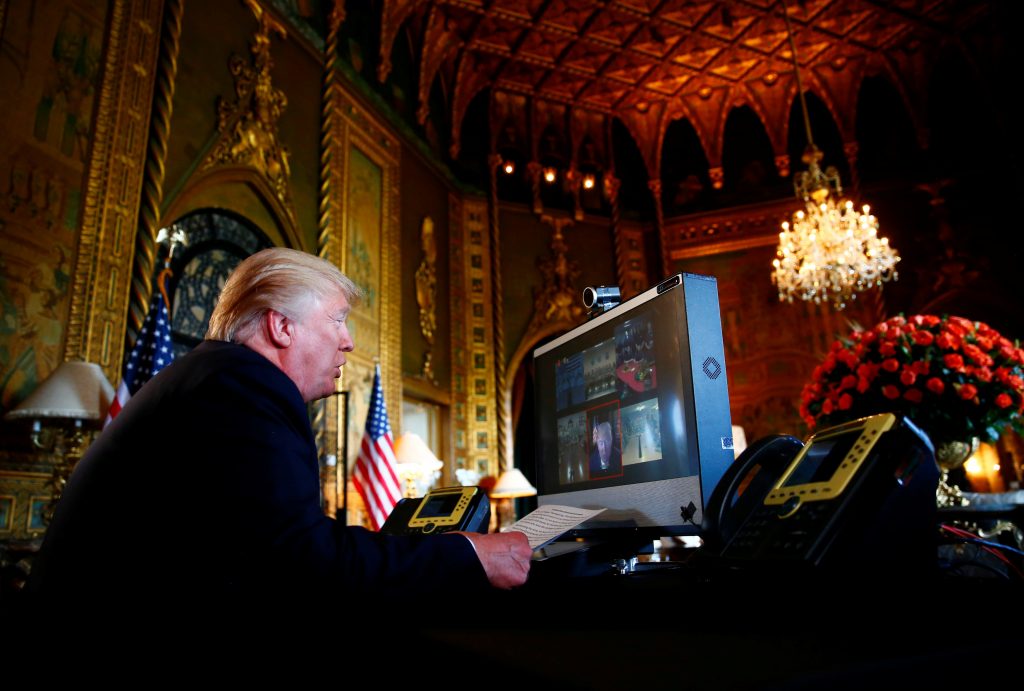 President Donald Trump thanked U.S. troops for their service on Thursday, assuring them “we’re really winning” against America’s foes as he celebrated Thanksgiving at his private club in Florida and provided lunch for Coast Guard men and women on duty for the holiday.

Using the occasion to talk up his own leadership, Trump told deployed military members via a video conference that they’ve achieved more progress in Afghanistan and against the Islamic State group under his watch than had been made in years of the previous administration.

“Everybody’s talking about the progress you’ve made in the last few months since I opened it up,” he told the 1st Brigade Combat Team of the 82nd Airborne Division, whose members are conducting operations in Kandahar, Afghanistan.

Speaking from a gilded room at his Mar-a-Lago club, Trump said: “We’re not fighting anymore to just walk around; we’re fighting to win, and you people are really, you’ve turned it around over the last three to four months like nobody’s seen, and they are talking about it, so thank you very much.”

Turning to the 74th Expeditionary Fighters Squadron based at the Incirlik Air Base in Turkey, Trump suggested the Obama administration hadn’t allowed soldiers on the ground to do their jobs.

“They say we’ve made more progress against ISIS than they did in years of the previous administration,” he said. “And that’s because I’m letting you do your job.”

Throughout the day — at events and on Twitter — Trump boasted about the economy’s performance since he took office, pointing to recent stock market gains and the unemployment rate, along with his efforts to scale back regulations and boost military spending.

Trump and his wife, Melania, also made a trip to a nearby Coast Guard station in Riviera Beach, Florida, where they delivered a lunch of turkey sandwiches, giant muffins, heaping baskets of fruit, chips and cookies to men and women on duty for the holidays.

During his remarks, Trump singled out the service for its hurricane relief efforts during Harvey and the other storms that battered the country earlier this year.

“There’s no brand that went up more than the Coast Guard,” Trump told them “What a job you’ve done.”

Trump praised the superiority of U.S. military equipment, too, yet said he tries to make sure that equipment the U.S. sells abroad — even to allies — is not quite as good as that kept at home.

“I always say, make ours a little bit better,” Trump said. “Keep about 10 percent in the bag.” He added, “You never know about an ally. An ally can turn.”

During his recent trip to Asia, Trump repeatedly talked up the quality of U.S. military equipment and encouraged countries including Japan and South Korea to purchase much more of it, both to defend themselves and boost U.S. manufacturers.

At the earlier video conference, Trump cleared the room of press after about 10 minutes so he could have “very confidential, personal conversations” with those on the line. Borrowing a line from his earlier days, he told the reporters “You’re fired,” and wished them a happy Thanksgiving, too.

On the Trumps’ own Thanksgiving menu for family and friends at Mar-a-Lago: turkey, stuffing, mashed potatoes and gravy, sweet potatoes with marshmallows, red snapper, Florida stone crab, baked goods, local produce and cheeses, and a selection of cakes and pies for dessert.