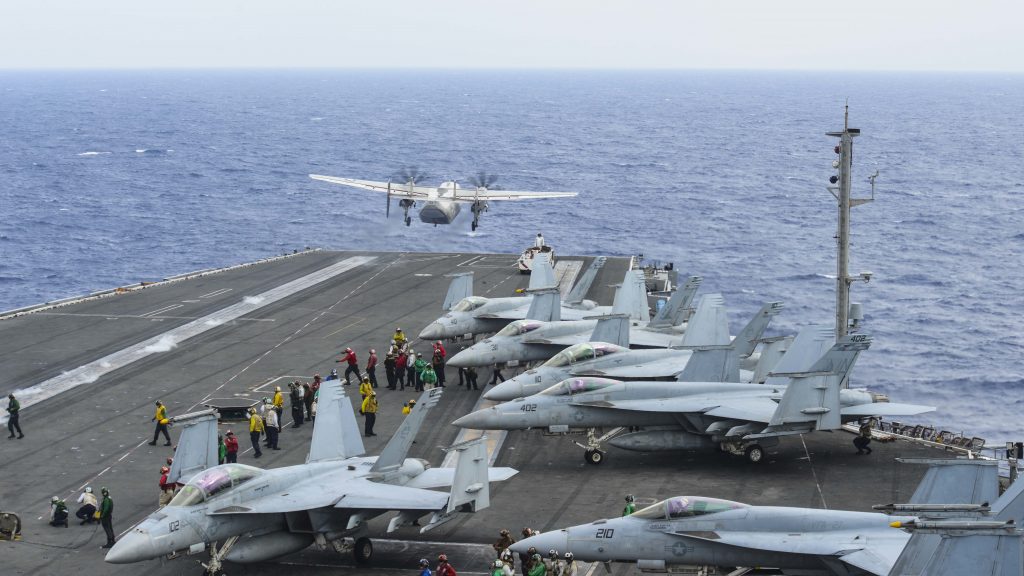 U.S. and Japanese ships and aircraft searched in the Philippine Sea on Thursday for three sailors missing since a U.S. Navy aircraft crashed a day earlier.

Eight people were rescued about 40 minutes after the crash of the C-2A “Greyhound” transport aircraft Wednesday afternoon, the Navy said. They were taken aboard the USS Ronald Reagan aircraft carrier and were in good condition.

The Navy said it had notified next of kin that the three missing sailors were “whereabouts unknown” but it would delay releasing their identities publicly for three days due to policy.

The twin-propeller plane came down about 500 nautical miles southeast of Okinawa as it was bringing passengers and cargo from Japan to the aircraft carrier, the Navy said in a statement. The cause wasn’t clear and the crash was being investigated, the Navy said.

The aircraft carrier was leading the search and rescue efforts along with Japan’s naval forces. The ships and aircraft had searched more than 320 nautical miles as of Thursday morning, the Navy said.

The Reagan was participating in a joint exercise with Japan’s navy when the plane crashed.

“A full search mission is underway,” U.S. Navy Secretary Richard V. Spencer said during a visit to Manama, Bahrain. “The Japanese navy is helping us with many, many assets.”

Japan’s Defense Ministry said the crash site is about 90 miles northwest of Okinotorishima, a Japanese atoll.

In Washington, the White House said President Donald Trump had been briefed on the crash. Trump said in a tweet: “We are monitoring the situation. Prayers for all involved.”

The Nov. 16-26 joint exercise in waters off Okinawa has been described by the Navy as the “premier training event” between the U.S. and Japanese navies, designed to increase defensive readiness and interoperability in air and sea operations.

The Navy’s Japan-based 7th Fleet has had two fatal accidents in Asian waters this year, leaving 17 sailors dead and prompting the removal of eight top Navy officers from their posts, including the 7th Fleet commander.

The USS John S. McCain and an oil tanker collided near Singapore in August, leaving 10 U.S. sailors dead. Seven sailors died in June when the USS Fitzgerald and a container ship collided off Japan.

The Navy has concluded that the collisions were avoidable and resulted from widespread failures by the crews and commanders, who didn’t quickly recognize and respond to unfolding emergencies. A Navy report recommended numerous changes to address the problems, ranging from improved training to increasing sleep and stress management for sailors.