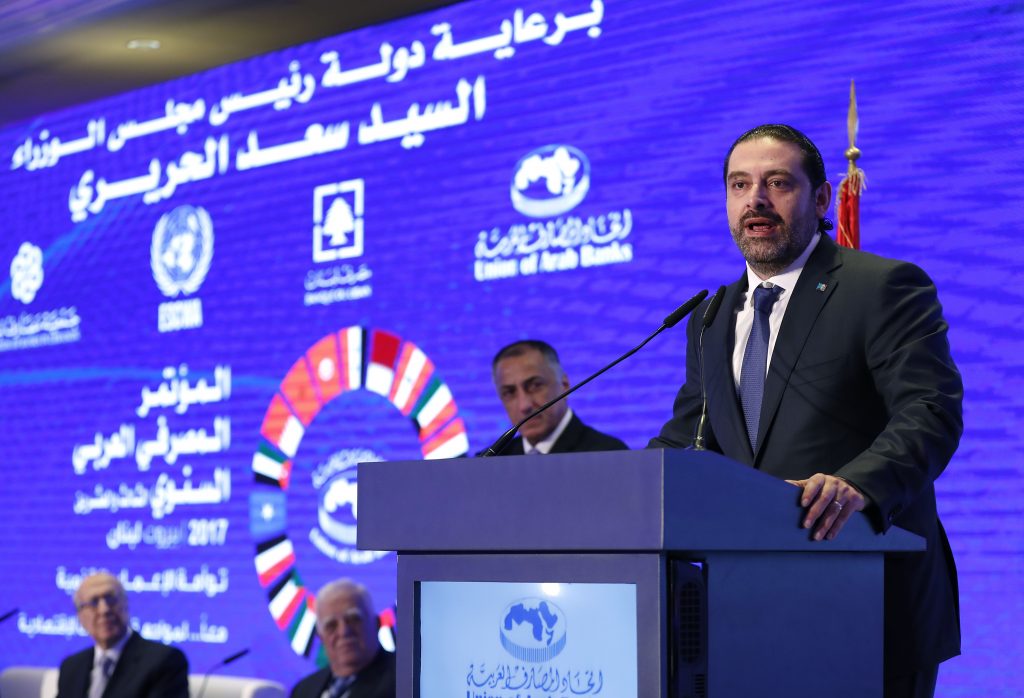 Lebanese Prime Minister Saad Hariri assured regional bankers on Thursday that Lebanon’s stability was his top concern, one day after walking back his shock resignation that threw his country into turmoil.

Hariri, speaking at the Arab Banking Conference in Beirut, said his government was going to prioritize Lebanon’s interests over regional challenges and stressed a return to the country’s official policy of “disassociation,” or neutrality in regional affairs.

“Our primary concern in Lebanon is stability, and that is what we are going to focus on,” said Hariri.

Hariri stunned Lebanon and the region by resigning on Nov. 4 while in Saudi Arabia, raising fears of market panic and recession.

But he told President Michel Aoun on Wednesday, Lebanon’s Independence Day, that he would stay on to allow for “consultations” that would seek to safeguard the tiny country’s delicate political system, stretched by competing agendas in Saudi Arabia and Iran.

Saudi Arabia is seen as the guardian of Lebanon’s Sunnis and is a main sponsor of its national government and military. Iran sponsors Lebanon’s Shiites and mostly funnels its funds and interests through the terrorist group Hezbollah.

The market fears were not realized, but the events pushed the debate over foreign influence — and Hezbollah’s formidable influence in Lebanon and the region — to the forefront of Lebanese politics.

“We must look at all means to reach the point where Lebanon stands back (from regional affairs), in practice, and not just in rhetoric,” Hariri said at the banking conference.

Weighing in on Thursday, Iran’s powerful Revolutionary Guard chief, Gen. Mohammad Ali Jafari, said the issue of Hezbollah’s arms is “non-negotiable.” He said Lebanon remains Israel’s first target, adding that therefore Hezbollah should be armed against it to maintain security in Lebanon.

“It is natural that Hezbollah should be equipped with the best weapons for its security. This issue is not negotiable; and all of Lebanon, except a number of little puppets, support the arming of Hezbollah,” he said, according to comments in the Iranian semi-official Fars news agency.

The prime minister said Wednesday he would defend Lebanon’s “Arab identity” and its ties with its “brotherly Arab nations” — a statement directed toward Iran and Hezbollah.

Saudi Arabia has backed Hariri and his father, the late Prime Minister Rafiq Hariri — though the kingdom is also seen as having orchestrated Hariri’s resignation.

In its first remarks since Hariri resumed his post, Hezbollah called the prime minister’s return “promising” and said it sends the signal that matters can “return to normal.” Hassan Fadlallah, a Hezbollah lawmaker, said Hariri’s Independence Day remarks could form the basis for efforts to find “appropriate” solutions to Lebanon’s crisis.

Central Bank Governor Riad Salameh told the conference that Lebanon’s economy is on track to grow 2.5 percent this year. He said inflation was floating between 3 and 3.5 percent.

Lebanon prides itself on being one of the region’s top destinations for finance.

The prime minister also met with the French ambassador on Thursday. Diplomatic efforts led by French President Emmanuel Macron proved instrumental to returning Hariri to Beirut after his resignation from the Saudi capital.