Community 95th Agudah Convention Opens With a Charge Toward Unity: ‘Together We Will’
Community 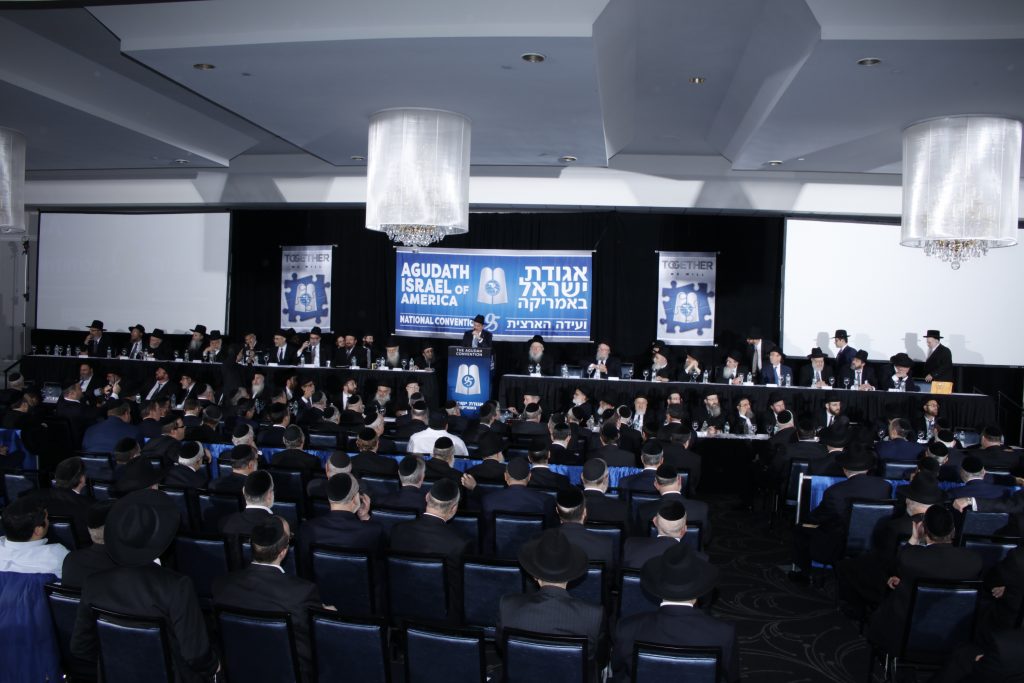 A message of unity, as encapsulated in the theme “Together We Will,” galvanized audiences at the various opening-night sessions Thursday night at the 95th annual convention of Agudath Israel of American, which is taking place at Crowne Plaza Hotel in Stamford, Conn. The keynote session opened with brief remarks by Rabbi Yeruchim Silber, director of NY Government Relations, who introduced convention co-chairman Rabbi Dovid Schnell, president emeritus of Agudath Israel of Illinois.

Harav Shmuel Kamenetsky, shlita, Rosh Yeshivah of the Yeshiva Gedola of Philadelphia, and chaver Moetzes Gedolei HaTorah, noted how important it is that so many derive chizuk from the convention. When one feels part of a group, each individual contributes to the whole. The term ‘Agudah’ implies a group, and identification with Agudath Israel means caring about and being involved with the issues that face Klal Yisrael as a group, but it means dealing with the concerns of each yachid as well.

Explaining the words of Yaakov Avinu in the parashah, “V’hayah Hashem li Leilokim — Hashem will be for me as a G-d,” (Bereishis 28:21) the Rosh Yeshivah cited Sforno who notes that ‘Elokim’ connotes middas hadin, the attribute of justice. The Avos, on their towering level, were able to function within the framework of middas hadin; successive generations were and are unable to do so, so middas rachamim was needed. Yet, Yidden do have their concerns and they have an address to turn to in Agudath Israel in confronting these concerns.

This sense of togetherness will enable us to accomplish one for the other, regardless of one’s affiliation with litvishe Yidden, Chassidim, Sephardim or any other.

Mr. Shlomo Werdiger, chairman of the board of Agudath Israel of America, pointed out that the convention offers a valuable opportunity for Agudah staff and askanim, where are located nationwide, to come together. He noted the absence  of Reb Yechiel Benzion Fishoff, chairman of the board emeritus, who, he said, has never missed a convention, and wished him a refuah sheleimah and expressed the hope he would grace next year’s gathering.

He expressed gratitude to various divisions of Agudath Israel. He pointed out that regional directors have accomplished mightily for yeshivos and communities; the yeshivah service division has reached over 1,000 executive directors; COPE and PSC have enabled countless people to attain gainful employment; Project LEARN assists parents of children with special needs, including many in the audience, enabling thousands of children to receive the therapies they need. Chayim Aruchim counsels people with ailing loved ones in their greatest hour of need. These are just a few of the Agudah’s many divisions.

He cited Rabbi Moshe Sherer, z”l, who asked why one covers one’s eyes with one’s hands during Krias Shema. He explained that when one’s eyes are closed, one actually sees more. Mr. Werdiger implored all those present to ‘close their eyes,’ as it were, and seek ways to become involved in assisting Klal Yisrael with its myriad needs and problems.

Harav Elya Brudny, Rosh Yeshivah, Mirrer Yeshivah Brooklyn, said togetherness is the only means to accomplish for Klal Yisrael. The Dor Deah had this quality at Har Sinai — vayichan Yisrael neged hahar, where vayichan – ‘they camped’ is expressed in the singular. “That was a moment of absolute togetherness,” he said. The needs of Klal Yisrael are overwhelming. Something needs to change and the convention affords an opening to listen and learn, to introspect on how to address them, with the direction of the Gedolei Yisrael. The moment of committing to follow their directives is a moment of togetherness.

He accentuated the import of this idea with the words of sefer Shaarei Teshuvah, which says that when Klal Yisrael convenes for meaningful change, that is a time when nedarim are acceptable and even desirable, although they may be ill-advised at other times.

A comprehensive report will appear, be”H, in a future edition.