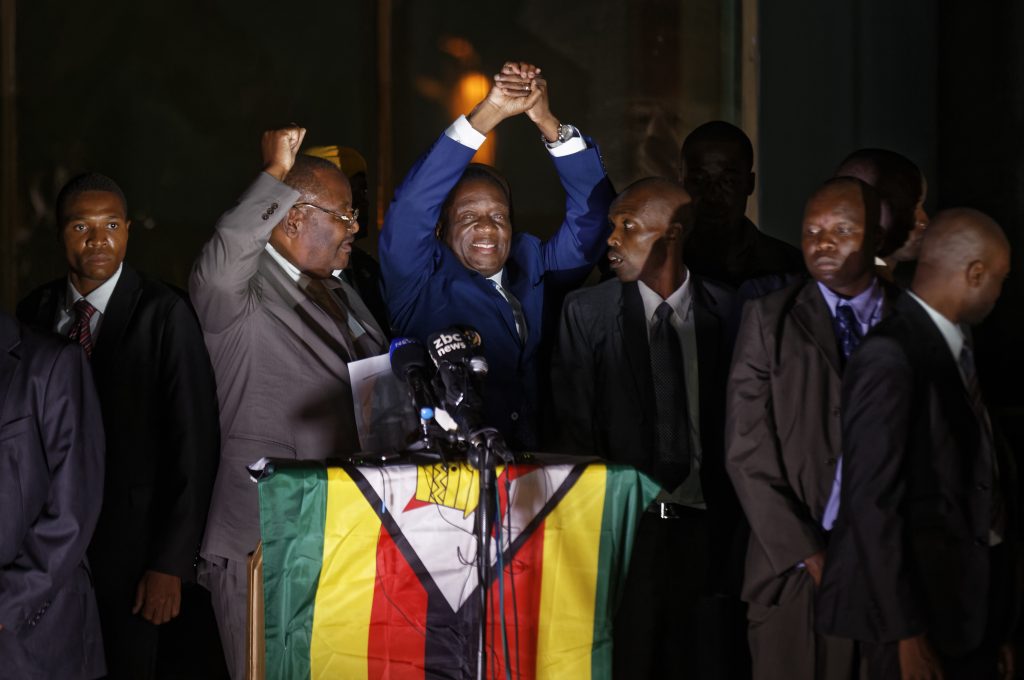 Zimbabwe’s new leader Emmerson Mnangagwa told a cheering crowd in Harare on Wednesday that the country was entering a new stage of democracy following Robert Mugabe’s removal as president after nearly four decades in power.

Mnangagwa returned to the country earlier in the day, having fled for his safety when the 93-year-old former leader sacked him as vice president two weeks ago to smooth a path to the succession for his much younger wife Grace.

“The people have spoken. The voice of the people is the voice of G-d,” Mnangagwa told thousands of supporters gathered outside the ruling ZANU-PF party’s offices in the capital.

“Today we are witnessing the beginning of a new and unfolding democracy.”

Zimbabwe was once one of Africa’s most promising economies but suffered decades of decline as Mugabe pursued policies that included the violent seizure of white-owned commercial farms and money-printing that led to hyperinflation.

Most of its 16 million people remain poor and face currency shortages and sky-high unemployment, something Mnangagwa promised to address.

“We want to grow our economy, we want peace in our country, we want jobs, jobs, jobs,” he told the crowd, adding, “The will of the people will always, always succeed.”

Mnangagwa’s dismissal was the trigger for the army and former political allies to move against Mugabe, feted as an independence hero when Zimbabwe broke with former colonial power Britain in 1980 but later feared as a despot. He resigned as president on Tuesday as parliament began an impeachment process, after resisting pressure to do so for a week.

People danced in the streets following his downfall, some brandishing posters of Mnangagwa and army chief General Constantino Chiwenga, who led the takeover.

Parliamentary speaker Jacob Mudenda said on Wednesday that Mnangagwa would be sworn in as president on Friday after being nominated by ZANU-PF to fill the vacancy left by Mugabe.

The demise of Mugabe leaves Zimbabwe in a different situation to a number of other African countries where veteran leaders have been toppled in popular uprisings or through elections.

The army appears to have engineered a trouble-free path to power for Mnangagwa, who was for decades a faithful lieutenant of Mugabe and member of his elite. He was also in charge of internal security when rights groups say 20,000 civilians were killed in the 1980s.

“Mugabe has gone, but I don’t see Mnangagwa doing anything different from that old man. This is not the change I expected, but let us give him time,” said security guard Edgar Mapuranga, who sat by a bank cash machine that was out of money.

Restoring the country’s fortunes and international standing will be a challenge. Alleged human rights abuses and flawed elections prompted many Western countries to impose sanctions in the early 2000s that further hurt the economy, even with Chinese investment to soften the blow.

Staging clean elections next year will be key to winning fresh funds.

Although Mnangagwa is almost certain to win any vote, German Chancellor Angela Merkel’s personal representative for Africa, Guenther Nooke, said it would be a victory for Zimbabwe’s “old elites” with the help of China.

“He will manage to get elected using fear or many tricks, and then we’ll have a succession from one tyrant to the next,” Nooke told broadcaster SWR2.

Mugabe is one of the last of a generation of African leaders who led their countries to independence and then ruled, among them Ghana’s Kwame Nkrumah, Jomo Kenyatta in Kenya, Felix Houphouet-Boigny in Ivory Coast and South Africa’s Nelson Mandela.

The African Union said he would be remembered “as a fearless pan-Africanist liberation fighter and the father of the independent Zimbabwean nation” and that his decision to step down would enhance his legacy.

But he also stifled democracy en route to winning a series of elections. His government is accused by the opposition and human rights groups of persecuting and killing opponents.

The forced takeover of white-owned farms from around 2000 aimed to bolster his popular support but crippled foreign exchange earnings from agriculture.

“The dark past is not going to disappear. They will be following him around like a piece of chewing gum on his shoe,” International Crisis Group’s southern Africa senior consultant Piers Pigou said.

“For him to really be seen to be doing the right thing, he’s going to have to introduce policies that fundamentally undermine the power structures of ZANU-PF, through a shift to genuine political pluralism and a decoupling of the party and state.”