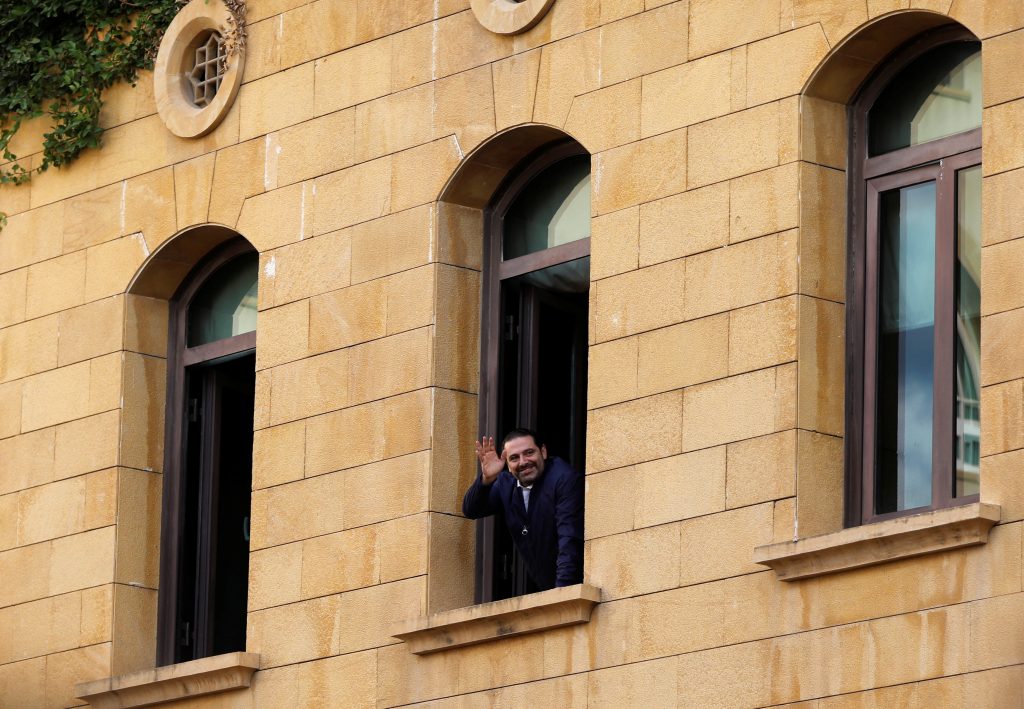 Lebanon’s Saad al-Hariri on Wednesday shelved his decision to resign as prime minister at the request of President Michel Aoun, easing a crisis that had deepened tensions in the Middle East.

Hariri made his announcement after returning to Beirut for the first time since he quit abruptly on Nov. 4 in a broadcast from Saudi Arabia. Top Lebanese officials have said Riyadh forced him to quit and held him in the kingdom. Riyadh and Hariri deny this.

At the presidential palace near Beirut, Hariri said he hoped his move would lead to “a responsible dialogue … that deals with divisive issues and their repercussions on Lebanon’s relations with Arab brothers.”

“I presented today my resignation to President Aoun and he urged me to wait before offering it and to hold onto it for more dialogue about its reasons and political background, and I showed responsiveness,” he said in a broadcast statement.

The resignation had shocked even Hariri’s aides. He returned to Lebanon late on Tuesday night after French intervention.

Aoun, a political ally of Hezbollah, had refused to accept the resignation because it happened in “mysterious circumstances” abroad. He had called Hariri a hostage in Riyadh.

Hariri appeared to express relief that Aoun had not accepted the resignation right away. He thanked Aoun on Wednesday for respecting constitutional norms and “his rejection of departing from them under any circumstances”.

The resignation pitched Lebanon to the forefront of the regional rivalry between Sunni Muslim Saudi Arabia and Shi’ite Islamist Iran, which backs Lebanon’s Hezbollah, and raised concerns of a protracted crisis.

In his resignation speech, Hariri had cited fear of assassination, and attacked Iran along with Hezbollah for sowing strife in the Arab world.

Hundreds of Hariri supporters packed the streets near his house in central Beirut, waving the blue flag of his Future Movement political party. The Sunni leader told them he would “stay with (them) … to be a line of defense for Lebanon, Lebanon’s stability and Lebanon’s Arabism”.

“His presence in the country alone brings stability,” said Manar Akoum, 26, as she stood with the celebrating crowd.

Hariri’s resignation was followed by a steep escalation in Saudi statements against the Lebanese government, which includes Shi’ite Hezbollah. Riyadh said the government as a whole — not just Hezbollah — had declared war against it.

Western governments including the United States struck a different tone, affirming their support for Hariri and the stability of Lebanon, which hosts 1.5 million Syrian refugees — nearly one in four of the population.

Washington is also encouraged by Hariri’s discussions with Aoun and his statement reaffirming his commitment to Lebanon’s stability, said the official, who spoke on condition of anonymity.

Ahead of his return to Beirut, Hariri had stressed the importance of the Lebanese state policy of staying out of regional conflicts, notably Yemen, where a Saudi-led coalition is battling Iran-backed Houthi fighters.

Hezbollah leader Sayyed Hassan Nasrallah, who had also called for Hariri’s return, said on Monday his group was open to “any dialogue and any discussion.” Nasrallah also issued his clearest denial yet of any Hezbollah role in Yemen.

A senior source in a political alliance that includes Hezbollah said Hariri’s move on Wednesday would start a breakthrough in the crisis. “This step is not detached from the framework of a complete solution whose features will appear in the coming days,” the source told Reuters.

A government minister from the United Arab Emirates, a close ally of Saudi Arabia, said Lebanon must implement its policy of keeping out of Middle East conflicts in order to get out of its own crisis as well as regional troubles.

“The main problem facing that is the selective implementation of (this) principle and the functional Iranian role of Hezbollah outside the Lebanese framework,” Anwar Gargash, minister of state for foreign affairs, wrote on Twitter.

Cyprus, where Hariri had briefly stopped on his journey home, said it would attempt to help defuse the crisis.

Hariri took office last year in a power-sharing deal that made Aoun head of state. He arrived in Beirut in time for independence day celebrations on Wednesday morning, taking the premier’s seat alongside Aoun and Parliament Speaker Nabih Berri.

Hariri said he looked forward to “real partnership with all the political powers, in placing Lebanon’s interests high above any other interests” and preserving coexistence among Lebanese.