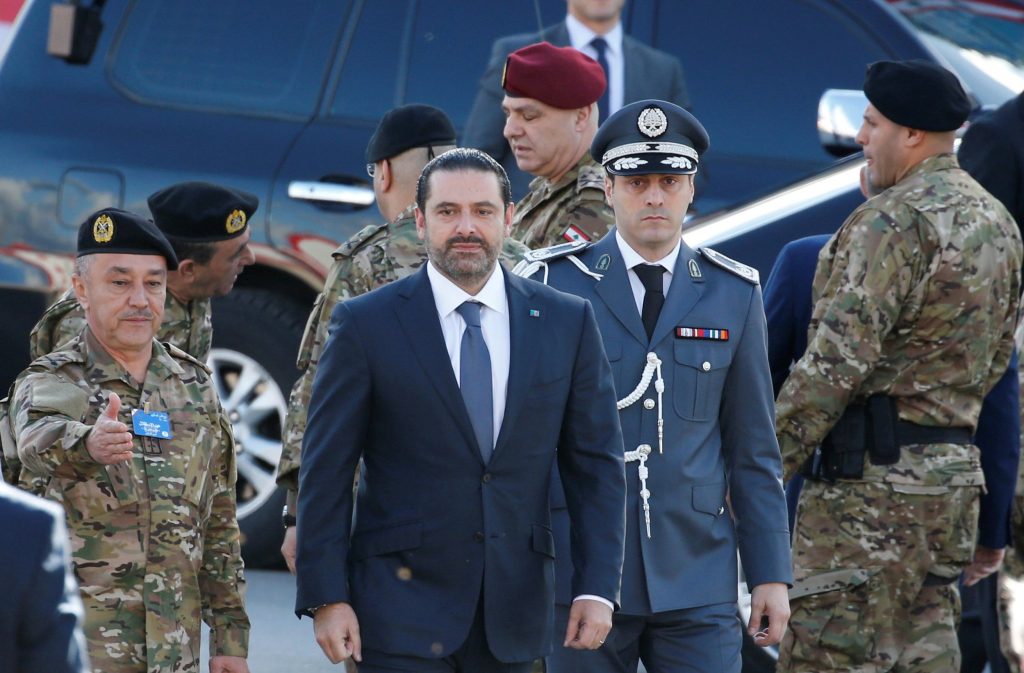 Saad al-Hariri attended Independence Day celebrations in Beirut on Wednesday after returning to Lebanon for the first time since declaring his resignation as prime minister in a broadcast from Saudi Arabia.

Hariri said that he would hold off presenting his resignation as prime minister in response to a request from President Michel Aoun to allow more dialogue.

“I presented today my resignation to President Aoun and he urged me to wait before offering it and to hold onto it for more dialogue about its reasons and political background, and I showed responsiveness,” Hariri said in a statement.

Hariri’s sudden decision to quit on Nov. 4 pitched Lebanon into crisis. President Michel Aoun greeted him warmly as he arrived at a military parade, where Hariri took the seat reserved for prime minister.

It is not clear if Hariri will stick by his resignation now that he is back in the country. Aoun refused to recognize it while Hariri was abroad.

Hariri met with Aoun and Parliament Speaker Nabih Berri on Wednesday at the presidential palace, where he is expected to clarify his position.

Lebanese state officials and senior politicians close to Hariri say Riyadh forced him to quit and held him in the kingdom, which Saudi Arabia and Hariri have denied.

The resignation took even Hariri’s aides by surprise. Hariri’s return to Lebanon followed an intervention by France.

A long-time Saudi ally, Hariri cited fear of assassination in his resignation speech, and attacked Iran and its powerful Lebanese ally Hezbollah for sowing strife in the Arab world.

The resignation thrust Lebanon to the forefront of regional rivalry between the Sunni monarchy of Saudi Arabia and Shi’ite Islamist Iran, which backs Hezbollah.

Ahead of his arrival on Tuesday, Hariri said he would declare his “political position” in Beirut. Hariri left Riyadh for Paris over the weekend. He journeyed back to Beirut late on Tuesday, stopping in Egypt and Cyprus on the way.

His resignation shook the power-sharing deal that brought him to office last year and made Aoun, a political ally of Hezbollah, head of state. Hezbollah, a heavily Shi’ite armed military and political movement, is part of the Lebanese government.

In a Nov. 12 interview from Saudi Arabia with a media station that he owns, Hariri said he would return to Lebanon to confirm his resignation. But he also held out the possibility of withdrawing it if Hezbollah respected Lebanon’s policy of staying out of regional conflicts, notably Yemen.

A government minister from the UAE, a close ally of Saudi Arabia, said Lebanon must implement its policy of staying out of Middle East conflicts in order to start getting out of its crisis and regional ones.

“The main problem facing that is the selective implementation of [this] principle and the functional Iranian role of Hezbollah outside the Lebanese framework,” Anwar Gargash, the UAE minister of state for foreign affairs, wrote on Twitter.

Hariri met Egyptian President Abdel Fattah al-Sisi on his way back to Beirut on Tuesday. Hariri said he discussed Lebanon’s stability and the necessity of keeping the country out of “all regional politics.”

Hezbollah leader Sayyed Hassan Nasrallah, who called for Hariri’s return, said on Monday his group was open to “any dialogue and any discussion.” Nasrallah also issued his clearest denial yet of any Hezbollah role in Yemen, where a Saudi-led coalition is fighting Iran-allied Houthi forces.

If Hariri affirms his resignation, Aoun will consult MPs on their choice for the next prime minister. He is obliged to nominate the candidate with the greatest support. Political sources expect Hariri to be nominated prime minister once again.

Following Hariri’s resignation, Saudi Arabia accused the entire Lebanese government – not only Hezbollah – of declaring war against it.

Western governments including the United States have struck a different tone, however, affirming their support for Lebanon and the stability of the country, which is hosting 1.5 million Syrian refugees – nearly one-in-four of the population.

“We stand firmly with Lebanon and will continue supporting your country’s efforts to safeguard Lebanon’s stability, independence and sovereignty,” President Donald Trump said in a national day message to his Lebanese counterpart.

In his interview, Hariri had warned that Lebanon was at risk of Gulf Arab sanctions because of Hezbollah’s regional meddling.