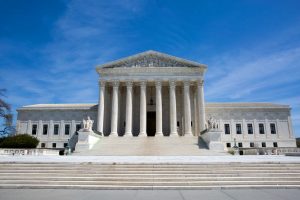 Of the more than 7,000 petitions submitted each year asking the U.S. Supreme Court to review a lower court’s ruling, only about 80 cases — or just over one percent — are accepted. At least four Justices have to agree that a case should be heard by America’s highest court, and generally only take those that have national significance, seek to settle conflicting opinions by lower courts, or have precedential value.

While most of the cases that make their way all the way up the judicial ladder have little or no interest to our community, the importance of some cases — especially those involving issues of religious liberties — cannot be overestimated.

One of the latter is the case of National Institute of Family and Life Advocates v. Becerra.

Xavier Becerra, who served 12 terms in Congress as a member of the House of Representatives, is currently the attorney general of the State of California. It is in that capacity that he is being sued by the National Institute of Family and Life Advocates, a Christian ministry that is being forced by the State of California to inform individuals they service about state-funded public programs that go against their religious beliefs. The California law dictates precisely how groups like the ministry would be required to tell their users about these objectionable programs, either by handing out a printed notice in “14-point or larger type,” providing a digital notice at the time of arrival, or posting a notice in the waiting room — a sign that “must be at least 8.5 inches by 11 inches and written in 22-point or larger font.”

After a series of lower courts ruled for the State of California, the ministry asked the High Court to intervene, and last week, the court announced that it had agreed to take the case.

It was the second major religious liberties case the Supreme Court has agreed to hear this term. The first, which has enormous implications for our community, is a lawsuit filed against a bakery in Lakewood, Colorado.

In less than two weeks, on December 5, the court will hold oral arguments in Masterpiece Cakeshop v. Colorado Civil Rights Commission. In that case, cake artist Jack Phillips sued after an administrative law judge and the Colorado Civil Rights Commission concluded that he had violated the state’s anti-discrimination statute when he turned down a request to bake a cake for an event he opposes on moral grounds. Lower courts repeatedly ruled against Mr. Phillips, rejecting the notion that since making the cake would violate his religious beliefs, forcing him to do so would violate his constitutional rights.

In their amicus curiae brief in support of Mr. Phillips, Agudath Israel of America pointed out that the lower court decision “would also bar Orthodox Jews from living and conducting our businesses in accordance with our core religious beliefs.”

While various historical tales are told of incidents in which local rulers (and according to one version, the Empress Maria Theresa) tried to force local Rabbanim to officiate at marriages that are prohibited by the Torah, these stories occurred hundreds of years ago in Europe.

The very idea that in the United States of America, a land famed for its ironclad commitment to the free practice of religion, a baker, a florist, or even a rabbi would be forced by law to assist or officiate in a wedding ceremony of a Jew and gentile, Kohein and divorcée, or any of the various other types of “marriages” forbidden by Torah law would have been unthinkable.

But then again, as the Agudah brief stated: “Not long ago, this case would have been inconceivable, even as a law school exam hypothetical. Until very recently, the moral values of America were generally consistent with the moral values reflected in Jewish law.”

Tragically, this is no longer true. Not only have the most fundamental concepts of morality and basic human decency been washed away in the name of progressiveness and liberalism, but those still clinging to what was long considered common sense find their rights to live their own lives according to their religious principles increasingly in peril.

The battleground has shifted dramatically from fighting for morality to fighting for the ability to freely practice our religion.

In addition to the friend of the court briefs that have been and will be filed in these two cases, increased efforts must be expended in the political realm — both in regard to strongly encouraging and praising the very positive statements and actions coming from the Trump administration, as well as lobbying Congress on these crucial issues.

Most importantly, we must daven that we should be able to continue to serve our Creator without any hindrance from the authorities or others, and do our utmost to ensure that against all odds we still remember at all times that the morals taught to us by Hashem in His Torah are the non-negotiable Truth.