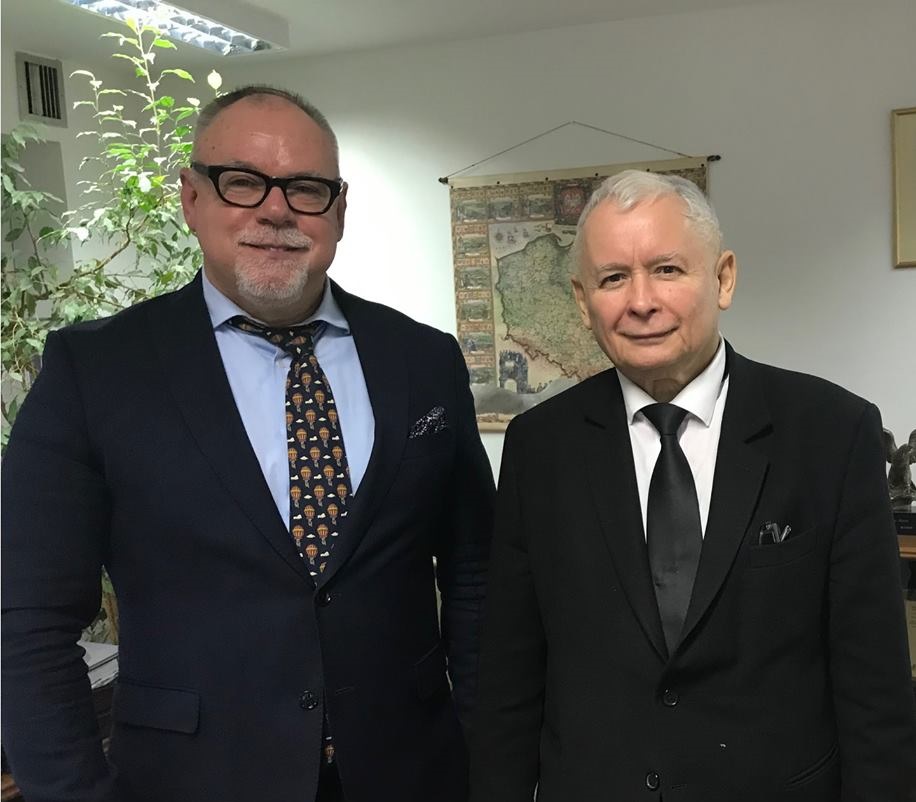 Leaders of Poland’s Jewish community met with the head of the country’s ruling Law and Justice Party, Jarosław Kaczyński, to discuss a wide range of issues including rising trends of anti-Semitism.

The meeting came amidst a heightened international focus on Poland’s relationship with its Jewish community, after a march to commemorate national independence — organized by ultra-nationalist groups — was marked by anti-Semitic and racist chants and imagery. Now, over a week from the march held on November 11, Polish prosecutors have opened an investigation as to whether its organizers violated laws against “public propagating of fascism and calls for hatred.”

‘’It’s important to speak out loudly against anti-Semitism and violence, and it’s also important to speak out loudly when the government does the right thing about it; here they did the right thing,” he told Hamodia. ‘’I was hopeful they would open a case, and now that they have, I am hopeful that they will prosecute the matter to the fullest extent of the law.”

The meeting had been in the works for weeks, long before the controversial march took place, yet Rabbi Schudrich — who attended the meeting together with the president of the Union of the Jewish Religious Communities in Poland, Lesław Piszewski — said the timing was “serendipitous.”

“For a while, we have been concerned with certain things in Poland that we have not seen as positive, and we have an obligation to speak honestly about the situation, not only to let them hear how we think, but possibly to say some things they would prefer not to hear,” said Rabbi Schudrich. “We had a very open and positive exchange of ideas.”

Mr. Kaczyński is a member of Poland’s Sejm, or parliament, and does not occupy a ministerial post in the government, yet he is seen as the de facto leader of the Law and Justice Party, which has been in power since 2015. The prosecutor’s office operates independently of Poland’s elected government.

The march, attended by some 60,000 people, was marked by large groups of participants chanting and displaying messages hostile to Jews, Muslims, and other minorities. The government condemned the manifestations, with President Andrzej Duda saying that “there is no place in Poland” for such sentiments, and calling it a display of “sick nationalism.”

In the wake of the incident, Mr. Kaczyński described racist imagery and rhetoric as a “marginal problem” and said that it might have been the result of “provocation” from anti-Polish forces, interpreted by many as a reference to Russian interference.

At the meeting, he reiterated the government’s condemnation and discussed multiple approaches to preventing such actions in the future.

Rabbi Schudrich said that he was pleased with the government’s reaction to the march.

“While the march itself was horrible, this was the first time the government so clearly spoke out against anti-Semitic events, as they happened,” he said. “I would have liked them to have done it quicker and stronger, but that is not really so important. What matters most is that the statements were made.”

In 2015, far-right groups National Radical Camp and All-Polish Youth held a rally in the city of Wroclaw in which an effigy of an Orthodox Jew was burned. Those same groups were key sponsors of the recent march in Warsaw.

At the time, the city’s mayor and bishop condemned the event, but the then-newly elected government was silent. Some organizers did face trial and ultimately serve jail sentences.

Attendees of the meeting also brought to Mr. Kaczyński’s attention a series of threatening phone calls that the local Jewish community had received recently.

Poland’s active Jewish community is largely centered in Warsaw. The number of Jews in the country is estimated at being somewhere between 10 and 20 thousand. Mr. Kaczyński stressed the government’s commitment to protecting the local Jewish community and its institutions.

The Law and Justice Party, which has populist and conservative leanings, has faced criticism, especially abroad and from the Polish left, for its anti-immigrant stance and actions against certain scholars who have written or lectured about Polish-Nazi collaboration during the Holocaust. While the party had no role in the march, critics have blamed its leadership for fanning anti-democratic and xenophobic sentiments.

While Rabbi Schudrich took issue with some of the government’s actions, epically over their attitude towards historic memory, he felt the accusations were not accurate.

“It’s a big party with all types of people. Some of them are extreme, but that’s a minority,” he said. “They are not Holocaust deniers, but they don’t like talking about some of the bad things that some Poles did, which is obviously not something I agree with. It’s important that the truth be told as it is.”

Other issues discussed at the meeting with Mr. Kaczyński included the present state of Jewish life in the country.

The delegation also raised the issue of what they see as unacceptable delays and stringent requirements for proving ownership of communal property, seized under Nazi and Communist rule, to the Jewish community. Matters relating to the preservation and upkeep of Poland’s many Jewish cemeteries, including an appeal for the government to provide the small community with greater aid in protecting the many burial sites around the country, were also discussed.

Of particular concern, Rabbi Schudrich said, is the cemetery in the town of Kalisz.

During Communist rule, headstones were removed and a school for handicapped children was built on the spot. Largely through the diplomatic efforts of Rabbi Hertz Frankel, the long-time secular studies principal of Mosdos Satmar and community activist, the town’s leaders agreed to dismantle the building and allow for restoration of the site. However, more recently elected municipal leaders have reneged on the agreement and are planning to convert the abandoned building into a school for the deaf.

“It’s one of the nastiest moves I’ve seen in my 17 years as Rabbi here,” said Rabbi Schudrich. “We voiced our dissatisfaction over the matter, and he [Kaczyński] said that the government would look into the situation and see what they could do.”

As expected, no solid policy commitments came out of the meeting itself, yet Rabbi Schudrich said that the community has already received to calls to follow-up on issues discussed.

“It behooves the Jewish community to have an open dialogue with the leadership of the country where it resides,” he said. “We let him know how we felt about the issues, and we are working together on how to deal with them.”